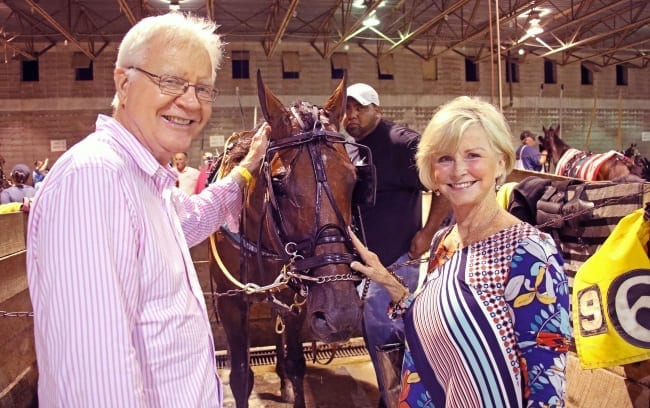 Thrill of the Chase

Joe Hurley on how breeding and co-owing Horse of the Year Always B Miki was the ultimate rush.

Joe Hurley knew the day would come – the day when he would no longer get to chase his superstar standardbred home the last sixteenth of a mile. Now that it’s a reality, not being able to watch Always B Miki compete against the sport’s elite is tougher than he ever expected.

The man who bred and co-owned one of horse racing’s most decorated performers knows he never has to look very far – literally – for reminders of the brilliant-looking bay that will be officially honored tonight at the Dan Patch Awards in Las Vegas as the 2016 Horse of the Year.

Any time he wants, 73-year-old Hurley could watch hours of video and look at hundreds of photos of the fastest horse in harness racing history; a pacer that began and ended his career on a winning note.

Hurley could reminisce, but he doesn’t. At least not for now.

It’s been that way ever since Always B Miki’s 4 ¼-length score in the $400,000 TVG Free For All Pace Nov. 12 at the Meadowlands, the final race before being retired to stallion duty at Diamond Creek Farms in Pennsylvania.

“I’m going through withdrawal,” admitted Hurley, who began his standardbred ownership career 42 years ago. “I’m trying to put it out of my mind. Probably, when the racing season starts again, I’m going to get together the entire career videos from YouTube and USTA and put it on one master DVD. It sounds stupid, but I’m going through a grief stage. Once I get through that – whenever I get through that – I’ll come back down to earth. Then I’ll watch the videos and look at the pictures.”

The high-profile Delaware-based criminal defense attorney will have a lot of happy moments to relive, including an unforgettable day on Oct. 9 at Red Mile.

When the son of million-dollar earner Always A Virgin out of Artstopper (Hurley also bred the pair) put his name in the history books with his well-documented 1:46 mile in the Allerage Farms Open Pace, Hurley ran the final strides trackside, an unplanned moment he still vividly recalls.

“It was just pure emotion,” said Hurley. “I never planned to do it. I don’t chart out a course. I was around the sixteenth-pole and found myself caught up in the moment. It was just an incredible feeling.”

Was he able to match strides with Always B Miki?

“Of course not,” Hurley said with a laugh. “I’d be very disappointed if I was able to do that. You can’t describe it. I guess it’s how a parent is with a child – you see something and it’s overwhelming.”

A father and son.

That’s just how Hurley sees his relationship with the lifetime earner of $2.7 million, who, apart from being feted tonight as the Horse of the Year, will also pick up both the Pacer of the Year and Older Male Pacer awards.

“It’s the only way I can express it,” said Hurley. “You don’t even think about the money. It’s about him and recognizing him for what he is.”

Owned by Hurley’s Roll The Dice Stable, Bluewood Stable, and Christina Takter, Always B Miki, trained by Jimmy Takter at four and five and Joe Holloway at two and three, won 30 of 53 starts, finished in the top three 46 times, and recorded over $2.7 million in earnings.

Many of those victories – including four in 2016 against multiple stakes-winning champion Wiggle It Jiggleit – were earned the hard way.

“He never got an easy trip,” said Hurley, of the horse named after his wife’s nickname. “There were so many times I can remember saying, ‘Can we ever get a two-hole trip and then let him get out in the stretch and go?’ Time after time, you thought he wouldn’t’ be able to keep going. But he just did. That’s Miki for you.

“I suppose what makes him so special is God, genetics, his heart — just a powerful animal. He’s always been a very handsome specimen. He just got more powerful as he went along. He’s just a very nice animal. Not moody at all, just cooperative.”

A winner of 12 of 19 races at 3, Always B Miki contended with a pair of injuries – both requiring surgery – that caused him to miss almost a year of racing. He came back in October 2015 and made trips to the winner’s circle in all four of his races to complete his campaign.

He also shares the world standard of 1:47 for fastest mile by a horse on a five-eighths-mile track, and is the record-holder for the fastest mile ever paced in Canada, 1:47.1.

After an initial interview, Hurley wrote a letter indicating just how special the horse has been.

“Our conversation prompted me to think about things that I haven’t even considered,” Hurley wrote. “My responses to the privilege that I had in helping create Miki were emotionally charged to the point of not having any real cognitive appreciation. I never realized that until we spoke.”

Hurley wrote that prior to Miki “aside from the normal things of children, grandchildren, relationships, etc.” he might have chosen for his personal highlight: (a) being named one of the top criminal lawyers in the U.S.; (b) appearing on the Larry King Live show, (c) Having NBC interrupt the Regis Philbin Show to broadcast an interview with him or (d) bumping into actress Julia Roberts “one-on-one” in an underground Manhattan parking garage.

“But the experience of Miki dwarfed all of those things combined,” he wrote.

The two best words to describe Always B Miki?

“I’ve got to have four words,” said Hurley. “Thrill of a lifetime.”

It’s a phrase Hurley reminds himself of on a daily basis.

“I would say I’m most proud of having assisted in the creation of Always B Miki,” said Hurley. “It’s not about me saying, ‘I’m such a great owner.’ I’m just lucky that God blessed me with something that has meant so much to me that I could never have imagined would mean so much to me. It’s a privilege to have the feelings that I have been able to have engendered in me about an animal.”

Perhaps Hurley will get to experience similar emotions through his champion’s offspring. He has three mares booked to Always B Miki.

And maybe, just maybe, the chase will once again be on.

“I am trying to do that now,” said Hurley.