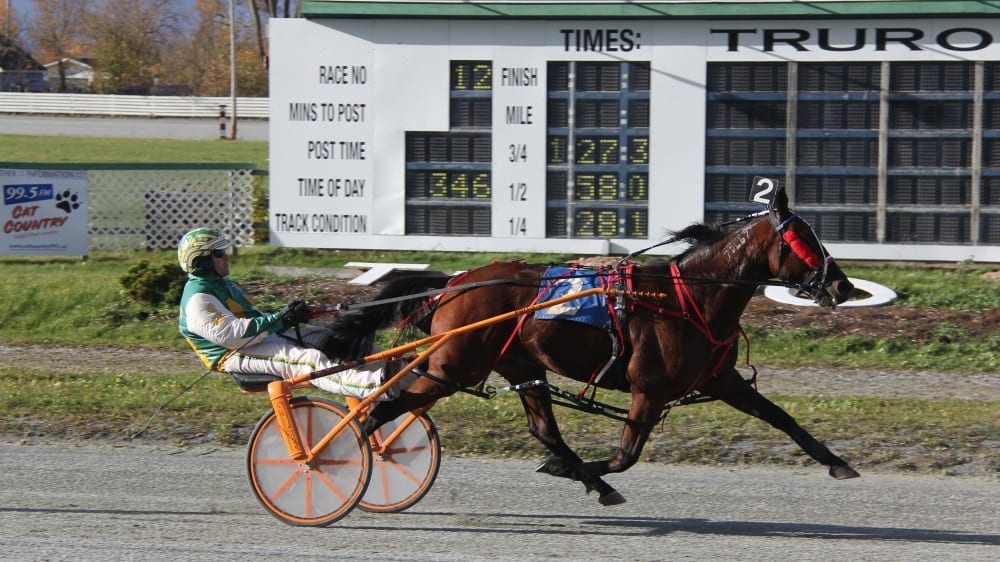 For the love of the game

Dana Getto is not in it for the money.

Neither is Surrealist, his horse. But the old boy is out of options, so it doesn’t matter.

Such a financial frame of mind best serves the patrons and pacers that race around the island tracks of Nova Scotia, one of Canada’s Maritime provinces.

There are just not enough racing dates (less than a 100) or betting dollars to spread around for man and beast to make a living through the pari-mutuel play at such harness outposts as Inverness Raceway, Northside Downs and Truro Raceway.

Case in point is the recent New Year’s Day card at Truro. Eight races raised just $9,557 in wagers. The two daily double pools? Very shallow. One had $9 in it. The other closed with $12 in the till.

Which brings us back to Surrealist. Never has a horse accomplished so much for so little as Getto’s 11-year-old gelding did in 2016. By winning 19 of his 31 starts, the pacing gelding tied two other standardbreds for the honor of winningest horse in North America.

His reward can’t or shouldn’t be measured in dollars and cents. While the horses he shared the laurels with (Velocity Vespa and Mademoiselle Paris) banked $190,110 and $67,299, respectively, Surrealist hustled in hopples for just $9,343 in purses earned.

“I pocket very little of that after expenses,” said Getto. “It doesn’t matter. I’m in it for the passion. I’m like an alcoholic with racing. It goes deep for me, real deep.”

And there is no reason for Getto to go to the mailbox or to his front porch in search of a package that might contain a spiffy trophy.

According to an official at the United States Trotting Association, the organization that is the keeper of the sport’s records, the website page that lists “Top Performers,” is the only prize Surrealist and the other two big winners will receive. No certificate, no hardware for the mantle.

Surrealist has called Nova Scotia home since 2012, but he was bred to be a top class performer, a son of millionaire Modern Art (Woodrow Wilson winner) out of the Run The Table mare, Keeping Secrets, a winner of $225,508.

Right out of the box, Surrealist lived up to his bloodlines, breaking his maiden at first asking and then topping off his 2008 freshman campaign by winning the $180,000 Ontario Sires Stakes Gold Final at Kawartha Downs in 1:55.

Racing can be a cruel business. Surrealist’s sophomore season ended with him being pulled up in an autumn start at Western Fair, the result of a fractured cannon bone. The injury would begin his exit from Canada’s major league circuit. After a series of claiming starts, including being haltered for $8,000, he headed for Nova Scotia.

“The injury cost him a big league career and he’s not the horse he once was, but he has plenty of heart,” said Getto. “It’s hard racing here. Forget the betting, and yes, the purses aren’t much, but it’s anything but easy.”

Even more difficult for a horse who was accomplished in Ontario and everybody in Nova Scotia knows it. Getto believes that holds especially true in the Maritime racing offices where race fields are constructed for a very lean purse structure that ranges from $722 to $2,310.

“We score six-wide up here and in every one of his 31 starts last year, he was assigned the outside post,” said Getto. “He’s a closer, which took away some of the disadvantage of always starting widest of all, but still, he had to get around everybody.”

Getto learned to live with the outside post assignments, but what happened at Inverness in August still galls him.

“They completely wrote him out, the conditions of the races making him ineligible to start,” he said. “I’m sure it cost him being the winningest horse by himself. He didn’t race after July 31 until Aug. 24.”

Surrealist made up for lost time in the most impressive of ways by winning 13 consecutive starts at Inverness and Northside Downs. It was as if he reached back a decade to replicate his best form.

“That was something,” said Getto. “It made him a fan favorite. He became a bit of a celebrity on our little circuit.”

The second victory in the run was a shared result, with Surrealist scrambling to pull even with a rival at the finish line. Getto is not convinced his horse didn’t win the right, outright.

“The photo finish picture was so cloudy, race officials were reluctant to separate the horses,” he said. “But I was told by one of them that they thought my horse won.”

The dead-heat resulted in Surrealist’s lowest payday of the season. He shared first place money, earning a check for a paltry $245.

Getto has a three-horse stable that includes Brother John (seven wins last year) and Rusty Riley (six wins) and says he doesn’t rely on racing for his living. He is retired and reports that a pension helps sustain him.

“Obviously, Surrealist is the star,” said Getto. “He’s such a low-key horse. He takes care of himself and is very low maintenance.”

Surrealist’s big 2016 did result in a call or two as to his availability, but Getto says the offers were, in his words, “half-baked.”

“Even though he’s 11 this year, I think he could compete at a track like Mohawk in say $20,000 claimers,” said Getto. “Nobody has called to offer that kind of money.”

In the meantime, Surrealist is already a winner in 2017, having scored at Truro on New Year’s Day. As usual, he started from the outside No. 6 post and rallied to win by a length in the slop in 2:04.2.

He was scheduled to race again last Sunday, but racing at Truro was canceled due to inclement weather. This Sunday is closing day at Truro and Getto says he’ll race Surrealist one more time for resting him until racing resumes in Nova Scotia in April.

“He’s had a great run and I expect he’ll come back with another good season in 2017,” said Getto. “Even if he doesn’t, he doesn’t owe me a thing. He’s a great horse and a great story.”