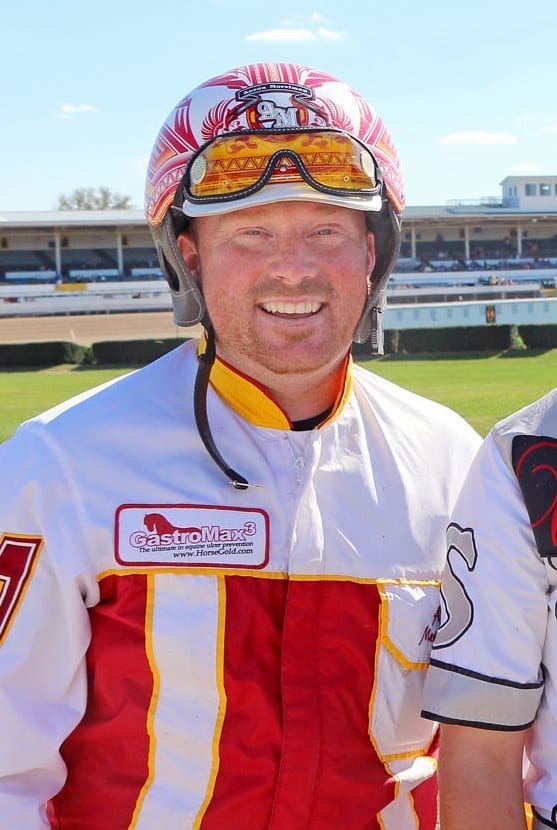 Aaron Merriman will win the North America dash crown by open lengths in 2016 for his second straight title, but that’s not stopping him from driving two-a-days at The Meadows and Northfield.

His body is hinting that it’s had enough, that it wants to retreat to the comfort of a hammock or a recliner. It sometimes screams at him, revolting in pain at its workload.

Aaron Merriman doesn’t want to listen. He’s not ready to cut back or sit back. No tropical drink with an umbrella in it for him when there are races to be won.

This year, for the second year in a row, Merriman will be North America’s winningest harness driver. He’s easily outdistancing his closest pursuer, George Napolitano Jr., by more than 140 winners and is pretty much on pace to equal or eclipse his total of 874 victories in 2015.

To build such an advantage, Merriman has maintained a breakneck schedule that he began almost a decade ago. He drives afternoons in Pennsylvania and evenings in Ohio, requiring him to endure a 270-mile roundtrip — that includes four hours of driving — four day a week.

“He’s sick,” said Page, only half-jokingly. “You have to be mentally sick to do what he does. I could not do all that back and forth, week in and week out.”

Merriman smiles at Page’s analysis, but he’s paying a physical price for his success. On a recent night in the Northfield Park paddock, after driving in 10 races at The Meadows in suburban Pittsburgh (winning once) and now about to launch into four-winner, 11-drive night at the track midway between Cleveland and Akron, he admitted his 38-year-old body has enjoyed healthier afternoons and evenings.

“I’m not having a good day, and yesterday was even worse,” said Merriman. “My schedule takes a toll, but I can take it. It’s funny. I can stand in the paddock and feel like hell, but as soon as I get in the bike, I feel better. And I like doubleheaders, driving day and night. Some days I feel like I’m 20, but there are others when I feel much older than 38.”

Merriman missed a matinee and a night of racing just 24 hours earlier when his left shoulder popped out of the socket and he had to wait for his body to relax before painfully popping it back in.

“I got it hung up putting on a sweatshirt,” he said. “Talk about a bad day.”

There are also long-lasting effects from being spilled out of his sulky, especially the lingering pain from a 2010 accident that left him with fractures in his neck, both wrists and an elbow.

“I have issues with headaches,” said Merriman. “I get extreme migraines, which I’m sure is the result of some of the race accidents. I have no idea how many concussions I’ve had, but when they come on, I treat them with (the medication) Imitrex.”

“They reset my body,” he said.

But as fall turns to winter and the wear and tear on his 5’11” frame piles up, Merriman is seeking new forms of relief.

“I’ve never had a massage in my life, but I’m going this week,” he said. “I do go to acupuncture a couple of times a week. It’s great. They needle you up and there is instant relief.”

While it’s doubtful that anybody will ever eclipse Tim Tetrick’s record number of drives and victories in 2007 (he won 1,189 races from a staggering 4,728 starts), Merriman is working on longevity gems of his own.

He has driven over 800 winners the last three years, a feat accomplished only by Tony Morgan (2006-2008) when he won three consecutive dash titles. And, Merriman’s 12,892 drives (and counting) since the start of the 2014 season, is a record for a reinsman over a three-year span. This year alone, no other driver is within 800 starts of Merriman’s work rate.

His love of the sport, the paddock camaraderie he says he enjoys among fellow drivers, and his appetite for victory, pushes Merriman to push himself. He couldn’t list his major stakes race victories this year and doesn’t seem overly concerned about it. It’s all about winning, no matter what the purse.

“Nobody feels worse than me about missing a race,” said Merriman. “It bothers me so much that I don’t want to look at the results to see if I missed a winner.”

Merriman is still ferrying back and forth from The Meadows to Northfield (he lives less than a mile from the latter) in the same black Cadillac that he employed last year.

Merriman confesses that he’s always in a rush to get to The Meadows and Northfield and usually applies a lead foot to the gas pedal.

“It’s been a horrible year for tickets,” he said. “It’s cost me hundreds.”

The judges’ stands at both tracks are also home to stern traffic cops. They pinch Merriman hard when he’s late to the races or is a no-show and he bristles over the treatment.

“The times I’m late it’s because of traffic or weather, yet they punish me for busting my butt,” said Merriman. “I don’t think it’s fair.”

Merriman estimates his fines this season are in the thousands of dollars. The most expensive penalty was dished out by the judges at The Meadows. They fined him $1,400 for “failing to fulfill his driving obligations on July 15.” He was named on horses in seven races and the fine was $200 for each missed drive.

As he closes in on the 2016 sulky championship, Merriman is not thinking vacation and has nothing planned for the first quarter of 2017. He did visit Ireland last summer where he was invited to compete in the Delaney Memorial (Aug. 13-14), thus adding trans-Atlantic miles to his already hectic schedule.

“I won a couple of races over there,” he said “Maybe somebody will add them to my worldly totals.”
While Merriman finds it difficult stepping away from his Penn-Ohio routine, he is about to take a break from one of his leisure time pleasures – the Cleveland Browns.

“I’ve had season tickets for three years but this year (the Browns are winless in 13 games) has been horrific. The last home game is on Christmas Eve. I usually do my gift shopping that day, so it’s not a hard decision to stay away from Browns Stadium this year.”

Monday, the day after Christmas, is another story. Post time at The Meadows is 1 p.m. It’s 6 p.m. at Northfield.