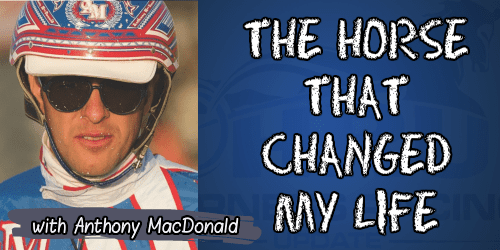 The Horse That Changed My Life: Anthony MacDonald

(Editor’s Note: This item originally appeared on the Ontario Racing website (www.ontarioracing.com) in 2016 under a section called For The Love Of Racing which still adds new stories weekly. Harness Racing Update will periodically republish some stories from the archives and plans to add original ones here featuring the stories of participants from across the harness racing world)

It happened more times than Anthony MacDonald of Guelph, ON can count. Every time it seemed the horseman needed a helping hand, a challenging trotter named for MacDonald’s father, Fred MacDonald, delivered.

“Every time I needed money, every time money was tight or things were getting a little uncomfortable, he always seemed to race really well. He was just one of those horses that always bailed you out,” MacDonald said of The Big Fred, a son of Prince Edward Island stallion Balance Of Trade out of the Brisco Hanover mare Rau D Judy. The Big Fred earned just shy of $300,000 racing from 2004 to 2012 with at record of 32-34-23 in 212 starts.

“My father sent him (to Ontario from PEI). We named him and broke him. When he was young he wasn’t much good at all and later in his three-year-old year going into his four-year-old year he really started making some money… I did really well with him,” MacDonald said.

“My father was (visiting from PEI) and it was the biggest stakes race my father was ever involved in,” MacDonald said. “(The Big Fred) was locked in the whole way last and I snuck out going into the last turn and around the last turn he was four-wide and he got up and won the race. I know how excited my father was and I was, too. The horse just always seemed to come through when you needed it.”

MacDonald said The Big Fred wasn’t blessed with a great brain and was a challenge to train, but that gave the trainer an invaluable education. The trotter came along when MacDonald was in his late-20s, just before his stable ballooned to some 65 horses.

“I get a lot of trotters that are problem trotters for a lot of people and The Big Fred taught me more about trotters than any text book or experienced old horseman ever could have taught me,” MacDonald said. “He was really difficult to race and really difficult to hang up. Without him there certainly would have been no knowledge there of trotters. He was like his own college course. It took you quite awhile to graduate, but once you graduated you could pretty much race anywhere.”

“I don’t know if (The Big Fred) kick-started my career or anything, but he definitely put me in a much better position. He gave me much more confidence as a trainer, also. A couple times I sold him to some bigger trainers and ended up getting him back. That’s always a feather in your cap,” MacDonald said. “I can’t say enough about what he did for me personally.”