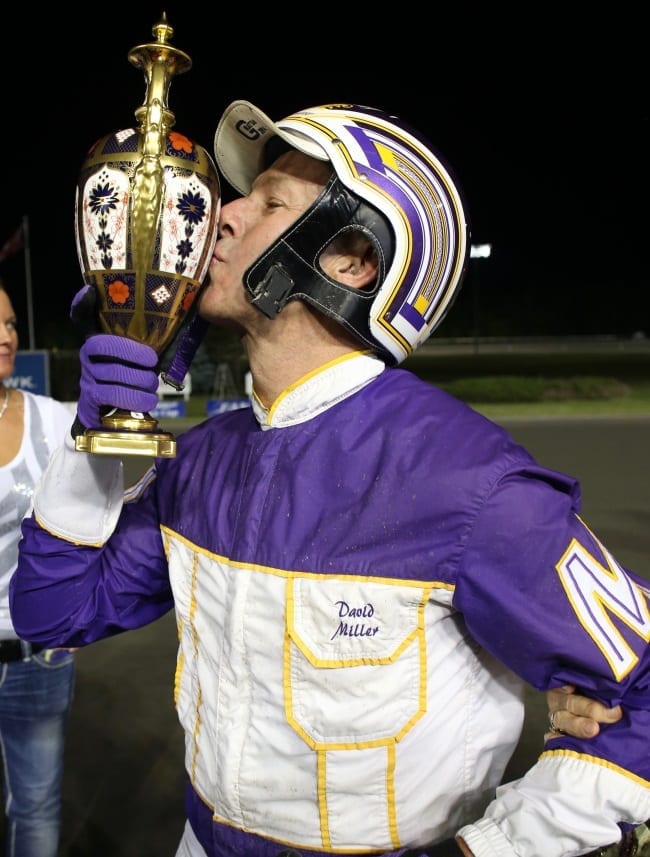 A look at how some of the top drivers stack up to their stats from a year ago.

Let’s take a look at how some of the top drivers are faring in comparison to last year through Nov. 14, 2016.

Last year’s Driver of the Year David Miller is number two in earnings, just as he was on Nov 14, 2015. He has 23 more wins and his money is up by five per cent — $558,173. Miller, who has prospered after taking last winter off, has seen his UDRS rise from 0.278 to 0.325. The Buckeye, who benefits from his association with world champion Always B Miki, appears to be the favorite to repeat as Driver of the Year.

Four time DOY Tim Tetrick is in third, just like last year. He has 102 more wins than he had at this point in 2015 and his earnings are up 3.5 per cent — $388,328. He’s number two at The Meadowlands and Harrah’s Philadelphia. Tetrick will be looking to dominate next year’s sophomore colt divisions with Walner and Huntsville.

Scott Zeron is having a career year: he moved from 11th at this point last year to number four. The driver of Triple Crown winner Marion Marauder has seen his win total jump by five per cent and his money increase by 22 per cent — $1,866,372 more than he had in mid-November of 2015. Scott was the leading driver at The Meadowlands this year.

Brett Miller, who got off to a slow start and was in 12th at the halfway point, is in sixth, three spots better than last year. Brett’s UDRS is about the same and he has just two fewer wins then a year ago, but his earnings are up by $491,863, or seven per cent. Racing Hill and Pure Country have helped account for that.

Sylvain Filion, the top driver on the WEG circuit, moved up five spots to number 12. He has three fewer wins, but his earnings are up by $760,008—13.5 per cent. Sylvain was the leading driver in the Ontario Sire Stakes, finishing more than a million dollars ahead of second place James MacDonald.

Chris Page jumped 10 spots to number 13. He has 110 more wins and his money is up 27 per cent $1.4 million. He was number two at Scioto Downs and Miami Valley. The Ohio Sire Stakes and Ron Burke’s stock were both key factors in his success.

Mark MacDonald, who recently won the Breeders Crown with Obrigado, like Page, jumped 10 spots, to number 14. His win total is up 30 per cent and his earnings have increased by 29 per cent — $1.5 million. His UDRS is up to 0.240 from 0.198. Mark is number six at Yonkers Raceway and was number three in the NYSS.

Jordan Stratton, who was very successful in the Levy and Matchmaker series, stepped up 11 spots to number 16. His win total is up 30 per cent and his money has risen by 27 per cent — $1.3 million. Stratton is number five at Yonkers.

Marcus Miller made a giant 15-spot leap to number 17. Miler is number six at Pocono Downs and number eight at Harrah’s Philadephia. His win total is up by better than 33 per cent while his money has risen by 32 per cent — $1.6 million. He won the Breeders Crown with Someomensomewhere.

Josh Sutton, the leading driver at Scioto Downs and Miami Valley, moved ahead 13 spots to number 21. He has 33 more wins and his money is up by 30 per cent — $1.4 million. Like Page, Merriman and Wrenn, he has benefitted from the new and improved Ohio Sire Stakes program.

Aussie Andrew McCarthy stepped up five spots to number 23. He’s number seven at Pocono, eight at Harrah’s Philadelphia and 11 at The Meadowlands. His win total is up 25 per cent while his money rose 12.5 per cent — $516,202.

Yannick Gingras, the unanimous choice for Driver of the Year in 2014, is on top of the money tree, just as he was last year. The number one option for leading trainers Ron Burke and Jimmy Takter has 21 fewer wins than a year ago and his earnings are down $139,189—about one per cent. His UDRS is 0.324 as opposed to 0.349 last year. He has dominated the senior mare divisions with Hannelore Hanover and Lady Shadow.

Last year’s dash champ Aaron Merriman, who is a shoe in to repeat, has moved up from 12th to ninth. His win total is off by four while his money is up by $141,435, or two per cent. He holds a 100 win lead over George Napolitano, who loses Pocono Downs from his calendar very shortly. Merriman is number two at Northfield and in third at The Meadows.

Our newest Hall of Famer Brian Sears is at eight, down from five a year ago. His win total is off by 16 per cent — 54 — and he’s more than 18 per cent short money wise — $1,608,715. Sears has tried to augment his regular gig at Yonkers — where he’s second to Bartlett — with success on the Grand Circuit, but the wins have been hard to come by this year. Bee A Magician is back, but most of the stakes dollars have dried up at this point.

George Brennan, the number three driver at Yonkers Raceway, has fallen 10 spots to number 18. His win total is off 30 per cent and his earnings are off by 29 per cent. His UDRS is down to 0.257 from 0.276. Brennan, who has made fewer than three dozen starts away from Yonkers, has driven in 11 per cent fewer races this year.

Dan Dube is another Yonkers regular who fell hard — from nine to 19. He has 55 fewer wins and is short $2 million. Dube is number four at the Hilltop track.