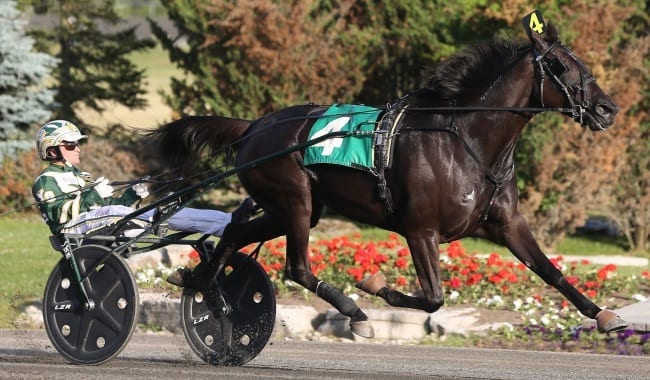 A close look at the divisional races for year-end awards in the aftermath of the Breeders Crown.

November has arrived, the Breeders Crown is in the books and the opportunities for those aspiring to division dominance are dwindling. Some races are still wide open while others are over.

Hannelore Hanover, the Swan For All Amazon out of Indiana, towers above the rest of the older trotting mares. Bee A Magician, the 2013 Horse of the Year in the U.S. and Canada, who won this division last year, lost four months to injury in the heart of the season, thus removing the only plausible obstacle between Team Burke’s star trotter and a Dan Patch. In addition to the Breeders Crown, Hannelore won the Hambletonian Maturity, Armbro Flight, Muscle Hill, Centaur Classic and Miami Valley Distaff. She is ranked third in the Nov. 1 Hambletonian Society/Breeder Crown Poll. She could call it a year now and still win her division with ease.

Hannelore’s opposite number, Lady Shadow, who won her division in Canada the last two years, is another sure shot. She won 11 of 18 starts this year and has earnings of close to $800,000. The five-year-old daughter of Shadow Play has won the Breeders Crown, Roses Are Red, Milton, Lady Liberty and Golden Girls. In the latter, in mid-July, she broke Always B Miki’s world record for a mile-and-an-eighth when she finished in an amazing 2:00.3. And along the way she matched Shebestingin’s 1:47 world record for a filly or mare, set three years ago at Red Mile. Granted Miki’s 1:46 world record tops all, but this feat is a solid second.

Broadway Donna, the division winner last year and the PASS champ at two and three, is a lock to rule the three-year-old trotting fillies. She won seven of 12, including the Breeders Crown, Del Miller and KY Filly Futurity. Fashion Farms’ filly flies under the radar and gets a minimum of credit, although, in fairness, hers has never been a particularly deep division. The Donato Hanover lass’s chief competition comes from Ariana G’s big sister All The Time, who beat Donna in the Oaks. Donna beat her in the BC and the Del Miller. The downfall for the Muscle Hill filly is the fact that she underwent surgery after the Oaks and didn’t race again until her BC elimination in mid-October. She just doesn’t have time to accumulate the wins needed to outdo her foe. All The Time won the BC last year, but it was too little too late as Donna garnered 87 per cent of the Dan Patch vote.

Two sons of Somebeachsomewhere, Huntsville and Downbytheseaside, are battling for freshman honors. The latter, a $65,000 Lexington purchase by trainer Brian Brown, is freaky fast. He spent most of the summer on the restricted circuit in Pennsylvania, but in September he set a 1:50 world record in the Standardbred at Delaware, OH, then went on to win splits if the Bluegrass and ISS at Red Mile.

Ray Schnittker’s Huntsville has a similar resume. He beat Seaside at Pocono in July, then lost to him a couple of weeks later. Huntsville was outstanding in his two starts in Lexington. The public sent Huntsville away the 4-5 favorite in the BC, with Seaside at 7-5. They finished one-two, with the former winning in a track record 1:49.1 for Tim Tetrick. That’s a tick off of Sweet Lou’s stakes record. Right now it looks like Huntsville will prevail in the quest for division honors. Both of them are staked to the Governor’s Cup at Woodbine on Nov. 19 (elims Nov. 11), so it isn’t over, yet.

Walner, a star in the making from the first crop of 2012 Horse of the Year Chapter Seven, has the freshman colt trotting title wrapped up. He’s the richest and fastest colt in his class, although he didn’t progress from restricted racing and the Kindergarten Series until October. He drew off by three in his track record 1:53 win in the BC for Tetrick and Toscano. Walner, who was foaled in Campbellville, ON, drew the nine post in Saturday’s $200,600 Kindergarten final at The Meadowlands. He is not staked to the Valley Victory on Nov. 19, and can’t be supplemented to that.

Triple Crown winner Marion Marauder came up empty — reportedly sick — in the BC and finished last. Still, he has enough equity built up to cruise to a division win. Some were holding out hope for HOY honors, but that’s now off the table. Bar Hopping, who appeared poised to take the Hambletonian, but didn’t get there, has won the Canadian Trotting Classic, Bluegrass and Breeders Crown over the last six weeks. And he takes on Sutton again in Friday’s $200,000 Carl Erskine at Hoosier Park. The Muscle Hill colt has earned our respect but it’s too late to catch the TC winner.

Like Walner, Resolve is the fastest and richest in his class, and he too will win his division. Wins in the Cutler, Cashman, Maple Leaf Trot and million-dollar International Trot add up to a Dan Patch for Ake Svanstedt’s Muscle Hill five-year-old. Obrigado was no slouch, with wins in the Maxie Lee, Charlie Hill, Cleveland Trotting Classic, Crawford Farms and Dayton Trotting Derby; and Flanagan Memory took the Crown, but Resolve gets the prize.

Betting Line won 14 of 15 starts and earned more money than all but BC winner Racing Hill within the division. Wins in the Cup, Jug, Milstein, Battle Of Brandywine — in a world record 1:47.2 — Simcoe and Champlain seal the deal for the Bettor’s Delight colt. Casie Coleman was hoping for HOY consideration, but the spider that knocked Betting Line out of the BC nixed any chance of that happening. He may start in the Matron on Nov. 10, and he and Racing Hill are both staked to the Progress Pace on Nov. 28.

Breeders Crown winner Someomensomewhere was the only freshman pacing filly to make this week’s Top Ten Poll and that was as the last also ran listed — with a single point. At this juncture two years ago, JK She’salady topped the Poll. However, there is no See You At Peelers or Precocious Beauty out there in 2016.

Idyllic Beach, who is the earnings leader and co-holder of the season’s record, would have secured a division win with a BC victory, but she finished third. The winner of the Great Lady, Kentuckiana and ISS is still in the thick of things, but no longer the presumptive winner.

And the Art Major filly, Roaring To Go, has wins in the Bluegrass and ISS. Being disqualified after crossing first in her NYSS final doesn’t help.

Breeders Crown winner Someomensomewhere has little to back that up — just a score in an ISS split and a PA Allstars win. However, she snuck into Saturday’s $149,100 Kindergarten final at The Meadowlands, and a win there would certainly enhance her resume. She and Idyllic Beach are staked to the Three Diamonds on Nov 11. That may settle it. Roaring To Go is not eligible.

The sophomore pacing fillies also have voters in a quandary. Pure Country entered the season as number one in the Experimental Rankings; big things were expected from the daughter of SBSW. But the competition is fierce in that division and she hasn’t been able to close the deal. She’s the only distaff pacer to top the million-dollar mark this year, and has taken the Fan Hanover, Garnsey, Lynch and Simcoe, but paternal sisters Darlinonthebeach and Call Me Queen Be, as well as the Bettor’s Delight filly, LA Delight, keeps raining on her parade.

Darlinonthebeach won the Shady Daisy, Valley Forge and splits of the Garnsey and Bluegrass; LA Delight won the Jugette and Nadia Lobell; and Queen Be took the BC and the PA Championship. All four are staked to the Matron on Nov. 10. It may come down to that.

Dominance of the open pacing division will hinge on how Miki and Wiggle close the season. If Miki wins the TVG, after beating Wiggle in the BC, romping in an open at The Meadowlands, and pacing the fastest competitive mile ever in the Allerage, that will be it. The Dan Patch, as well as Horse of the Year honors, will be his. On the other hand, if Wiggle takes the TVG, things will get interesting. If a horse other than those two wins the TVG, Miki will win the division and be crowned Horse of the Year.