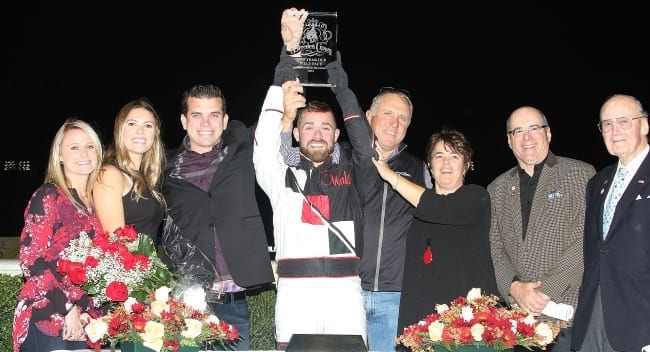 Ranking the top five moments from Saturday’s Breeders Crown events for two- and three-year-olds at the Meadowlands:

Breeders Crown king Jimmy Takter opened the Crown portion of the card with a victory with Ariana G in the rookie trotting fillies’ division and then added another later in the card when Bar Hopping won the sophomore trotting colt test. Add that to the Breeders Crown the trainer earned on Friday night with Always B Miki and the three Crowns for the weekend puts Takter at 30 Breeders Crown victories lifetime.

Despite having to miss being at the Meadowlands after having hip replacement surgery, Toronto breeder Al Libfeld had a hell of a night with his fellow Torontonian and partner Marvin Katz. The pair not only finished first and second with Takter-trained homebreds Ariana G and Princess Aurora, respectively, in the two-year-old trotting filly division, they are also part of Bar Hopping’s ownership, giving them two Crowns on the night.

Is there anything quite like seeing first-time Breeders Crown winners? Marcus Miller (Someomensomewhere, two-year-old filly pacers) and Scott Zeron (Call Me Queen Be, three-year-old filly pacers) were refreshingly-excited first-time Crown champs. The pair of 27-year-old rising stars loved every minute of it, with Miller particularly thrilled to team up with his father, trainer Erv Miller, for the win with Someomensomewhere. As for Zeron, it’s been a year of firsts. He won his first Hambletonian in August with Marion Marauder and then the Trotting Triple Crown with the same horse. Though Marion Marauder had an off night in his Crown test, Zeron still got his Crown.

The prohibitive 2017 Hambletonian favorite was ultra-dominant and ultra-impressive for trainer Linda Toscano and owner Ken Jacobs, winning by four-and-a-half lengths. The son of Toscano’s champ Chapter Seven out of Random Destiny sure looks like the real deal.