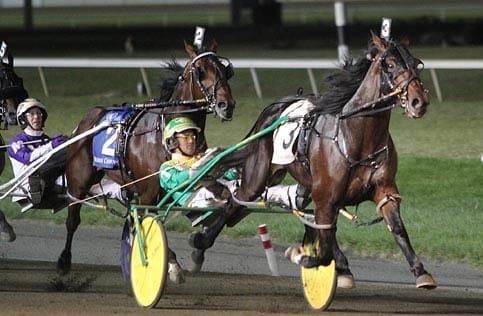 The $600,000 Breeders Crown two-year old colt pace was seen as a showdown between dominant elimination winners Huntsville and Downbytheseaside, and the pair didn’t disappoint on the track, as the favored Huntsville got the upper hand on his rival once again with a track record performance for two-year old colt pacers at Meadowlands on Saturday night.

Huntsville and Downbytheseaside haven’t been separated by much when they’ve been on the racetrack together this season. In their previous meeting in the Pennsylvania Sire Stakes back in September, the pair raced within two lengths of each other over the mile, with Huntsville going on to win by a half-length. They also matched the two-year old colt pacing world record at Red Mile on Oct. 8 in separate divisions of the International Stallion Stakes. Finally, on Saturday, the pair were once again closely matched in the Breeders Crown, with Huntsville on the lead and Downbytheseaside right behind him in the pocket.

Downbytheseaside tipped out at the top of the stretch and tried to pace down Huntsville in the final strides, but he couldn’t get there, as Huntsville crossed the line in 1:49.1, missing the Breeders Crown record of 1:49 set by Sweet Lou in 2011 by a fifth of a second. Huntsville broke the Meadowlands track record for two-year-old colt pacers of 1:49.3 set by Captaintreacherous in 2012.

Huntsville found himself fifth early on as the field raced through the first turn, but aggressively made his way to the front along the backstretch. Trainer Ray Schnittker said the quick early pace had him worried for the stretch run.

“I got a little concerned at the half with a :54.1 around the last turn. I said, ‘Well, let’s separate the men from the boys’ and he was the man,” he said.

Huntsville won his sixth consecutive race and seventh race overall in his 10th career start for Schnittker, who co-owns the colt with Charles Iannazzo, Ted Gewertz, and Steve Arnold. Schnittker and Iannazzo also co-bred the son of Somebeachsomewhere, who is out of the Western Hanover mare Wild West Show. Huntsville earned $300,000 in the victory to bring his career earnings to $603,234.

It was Schnittker’s third career Breeders Crown victory as trainer. He had previously won the 2007 two-year old colt trot with Deweycheatumnhowe and the 2011 two-year old filly trot with Check Me Out.

“He showed how good he is,” Tetrick said. “He made a really bold move down the backside. I didn’t know if (Downbytheseaside driver) Dave (Miller) was going to let me go, or how far he was going to string me out, but he showed how tough he is. At the top of the lane he fought hard and opened up down by the wire.”

Despite running second in the two-year old colt pace, Downbytheseaside has had a productive season of his own, recording seven wins in 12 starts. Trainer Brian Brown said he had no complaints Downbytheseaside’s effort in the Breeders’ Crown.

“I feel pretty good,” Brown said. “I’m disappointed we didn’t win, but my horse raced great, Ray’s was just better. Everything was perfect, we were right where we wanted to be, we just couldn’t catch him. I thought my horse sat well tonight, he’s been a little tough to handle at times, and the fractions were right. At the top of the stretch I thought we were pulling up to him and I thought we were in good shape, but Ray’s horse paced away from us.”

Miller agreed that Downbytheseaside had a good trip.

“My horse felt really good,” he said. “I was waiting for room and when he got it, I moved him over, he took right off and went after him. Halfway through the stretch, he let up. He did what he could do. The other horse was just better tonight and congratulations to those guys.”

Schnittker said Huntsville would be pointed towards the $565,000 Governor’s Cup at Woodbine to close out the year, but the pacer is now drawing comparisons to Schnittker’s 2010 Meadowlands Pace winner, One More Laugh.