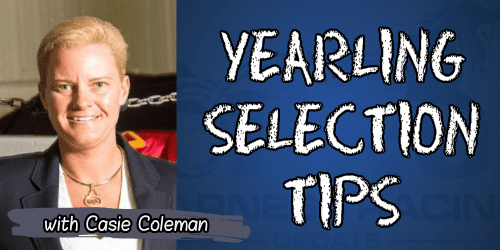 Casie Coleman isn’t afraid to put a yearling through its paces during a farm visit. In fact, she’s a frequent visitor during yearling season and has a very demanding checklist for a prospect to navigate before earning a spot on her shortlist at sale time.

“You want a bright eye, big nostril, big throat… I’m very, very picky, but basically good conformation. I’ve got to be able to get my whole fist between their jaws and their throat. I don’t care if they are small or big or medium, but you want a big ass and a big shoulder. You don’t want a scrawny little horse.”

Beyond that, Coleman says she sticks with the farms that have been known to throw champions. She believes in good breeding, but won’t overlook other problems just because of a pretty page.

“I won’t buy a really well-bred horse if there’s anything I don’t like on it and vice versa,” said Coleman, who plucked champion mare Idyllic for $13,000, despite an unbecoming pedigree.

“I will absolutely buy a horse that’s bred out of some mare that no one has ever heard of, if I like everything else about the horse.”