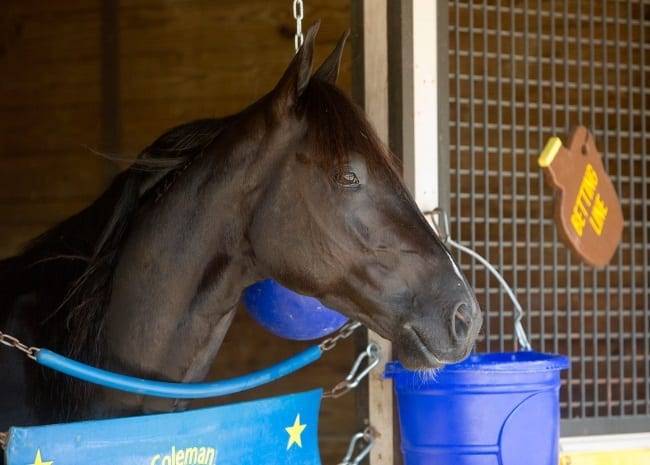 The Little Brown Jug is under formal protest with the Ohio State Racing Commission. A group of trainers said text messages allegedly sent by trainer Casie Coleman on the morning of the Jug caused concern that her horse, Jug winner Betting Line, may have been treated in violation of the rules.

Trainers Tony Alagna, Jimmy Takter and Ron Burke, who collectively condition the other five horses that were in Betting Line’s heat, launched an official protest before the race and refused to come out for the post parade.

“We didn’t feel like everything was on the up and up,” Alagna said before the first heat. “We felt like a horse may have been treated. We don’t know that for sure because we never saw anything, but we saw intent to do something based on text messages. We know that’s not a lot, but we called it into question and we thought it was time for us in the industry to take a little bit of a stand.

“We’re not accusing anyone of doing anything, but we just want answers. We’re not taking part in the post parade. We’re coming out by ourselves for a reason.”

Coleman, a member of the Little Brown Jug Society, did not deny that she sent the text messages, which were discovered and reported to judges when a phone belonging to one of Coleman’s employees was discovered after being lost at the Delaware County Fairgrounds on Wednesday night.

Harness Racing Update has seen two photos of those messages, one allegedly sent from Coleman’s cell number read, “Any time between line 830-1030 range when it’s clear saftly (sic) get his treatments into him.”

“My professional opinion… if they did or did not (do something), I cannot answer, of course, but I think they had a plan today and were going to give the horse something,” Takter said.

Takter called BS on that story and then questioned the judges’ handling of the investigation.

“Did they ever question what was in the yogurt? Maybe it’s baking soda in the yogurt, how do I know? They should have taken the groom and her and thrown them in two separate rooms and if they had a similar story it would have been more accurate,” Takter said.

Coleman, who said her tack trunks, horse trailer and car were searched by racing officials, said the other trainers “are just trying to get (Betting Line) scratched because they simply can’t beat him.”

“(Officials) can do anything they want – they did blood testing, they did urine samples. They took another blood sample for TCO2 testing. I told them, ‘Anything you want to do, go to town’ and I believe they are going to test him again now and I just let them have free access to the horse. The talked about sending testing to Hong Kong, I said ‘I’ll pay for it, go ahead, no problem’ so they can do whatever they want. We did absolutely nothing wrong and if (the other trainers) want to act childish, well, this is the Little Brown Jug and I’m here to train my horse to beat them, not to try to get them scratched to beat me.”

Takter, who won the second heat with Western Fame and was second to Betting Line in the final, said he Burke and Alagna heavily considered scratching their horses. “The only reason why we raced was we clearly felt bad for the Little Brown Jug with all the people out there. Otherwise, we would have all just walked out,” Takter said.

“You know what, God bless (Coleman) if she wants to win that way. This was a very cloudy win, in my eyes anyway,” Takter said.

“(A Jug official) said to us, ‘You want us to scratch the horse based on this text message? Do you think it looked genuine?’ I said, ‘It’s a very hard decision, yes. But what would they do, if Tony, Ron and I said we weren’t going to let that horse out on the track. What would they do then?”

Coleman said the other trainers did not speak to her. “Not one of them had enough nuts to come over and ask me, ‘What is this?’ Not one of them spoke to me,” Coleman said. “I was in the Jug barn myself all day long. They could have come up to me, asked me ‘What is this? What’s the problem?’ Ask me anything. I’ve cooperated with the judges, anything they wanted all day long and I’ll still cooperating if they want to do any more testing when we get back. Have at it.”

Takter said another issue is Jug security was inadequate.

“The security is a joke,” he said. “I see people going in and out there, no one is checking. I swear, if I wanted to give the horse something, I could have done it hundreds of times. These people should be checked every time they are coming in and out. The grooms shouldn’t be allowed to leave… They should be searched.”

Where the phone in question is now, is unclear. Coleman said she asked the judges to return the phone but judges only received photos of the messages visible on the lock screen.

The Delaware County Fair issued a statement regarding the trainers’ protest: “The horsemen expressed their concerns to the Ohio State Racing Commission (OSRC). Little Brown Jug officials worked with the OSRC and the horsemen and we are pleased that the horsemen participated in our event. At this point it is an OSRC decision.”