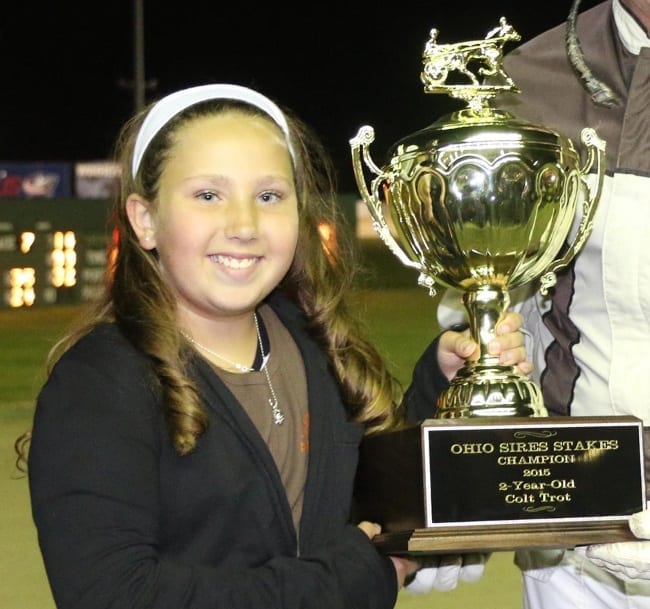 A major motion picture production company has purchased the story of Breana Carsey and MJB Got Faith.

The story reads like a Disney-esque Hollywood fairytale, only it’s real. An 11-year-old girl really does own and manage one of the top horses on the Ohio Sire Stakes circuit, one that has made $279,600. And the tale really did start when she asked her father to buy her a “mommy horse” for her birthday and that mommy horse, who cost just $1,700, really did go on to produce the very talented trotter MJB Got Faith, who is now three.

So Hollywood didn’t create the story, but now a major studio, not to mention an author, is set to recreate it. Brian Carsey, the father of MJB Got Faith’s owner, Breana, said that the family has a signed deal with a major production company to produce a movie based on the MJB Got Faith story and has also been in contact with authors looking to write a biography of the horse and his daughter. The elder Carsey said he was not at liberty to name the studio but said it is among the biggest names in the industry.

The potential of a book and movie about the incredible story of MJB Got Faith are just two of many new twists to the saga, which was first brought to light last year in an exclusive story in Harness Racing Update.

When she was just eight, Breana dreamt of owning a horse, specifically a “mommy” horse. Her father, a small-time breeder and owner, was prepared to buy her one for her birthday but had a budget of just $2,000 to spend at the Blooded Horse mixed sale in Delaware, OH. When a few that he was interested in were sold for more than he could afford, he reached out to his daughter and she looked at the catalogue and asked him to buy a mare named Imageofasweetgirl, for no other reason other than she liked the name.

The dam was in foal to Trainforthefuture and in 2013 she delivered MJB Got Faith, The “M” is for her sister McKenzie, the “J” for her brother Jordan and the “B” for Breana. “Got faith,” has always been one of Breana’s favorite sayings, one she used many a time when her father expressed doubts that the horse would ever amount to anything. As a two-year-old, the trotter went five-for-five and made $192,500 and was named Ohio two-year-old male trotting champion.

The story was picked up by CBS News and it apparently caught the attention of someone in Hollywood.

“A movie deal is in the works,” said Brian. “She has a confirmed movie deal, a signed contract. The screenwriters will be coming to Cleveland (to watch the horse race at Northfield Park) and get a vibe for the action. I thought things were moving along slowly, but they tell me that for Hollywood everything is moving very fast.”

Breana’s parents have never interfered with how their daughter managed the horse, nor have they taken any of the money for themselves. Along with trainer Walter Haynes Jr., she plans the racing schedule and decides who will drive the horse. Last year, she was presented with six-figure offers to sell MJB Got Faith and decided on her own to keep him. Brian Carsey said it’s been the same with the movie and book negotiations, that Breana is in charge and has spent dozens of hours on Skype discussing plans with Hollywood figures.

What makes the story even more poignant is that Breana donates a portion of the earnings to charity. This year she has made a donation to her school, St. Gabriel in her hometown of Connersville, IN, and she has donated money to help buy equipment and improve the field conditions for her brother Jordan’s high school soccer team. She had plans of buying a farm so MJB Got Faith would have a suitable place to live after he’s done racing, but she has become more focused instead on spending her money on charitable causes.

“I want to put people first, ahead of my own needs,” she said.
“My daughter absolutely has not gotten a big head,” Brian Carsey said. “I think it’s just her nature and her belief that she is doing good for other people. She’s stayed grounded through it all. She’s hasn’t gotten arrogant or complacent.”

On the racetrack, things haven’t gone quite as well for MJB Got Faith this year as last. He is five-for-11 as a three-year-old and lost his first three races of the year. But he’s put it together of late, winning two of his last three, including an Aug. 12 $40,000 sire stakes race at Scioto Downs in his last start.

Breana said she missed many of his races last year because she couldn’t stay up late at night and be expected to go to school the next day, but has found a way to be present for all 11 starts this year.

“I’ve loved this year because I’ve gotten to go to all his races and be around him much more,” she said. “I think the bond between us is even stronger. I think he knows me and knows who I am. I’ve been around him since he was a baby and I think he thinks of me like a mom.”

Breana used some of her money this year to add to her stable, buying, for $20,000, a half interest in another Ohio-bred three-year-old trotter named Triumphant’s Chip. She gave two-thirds of her share of that horse to siblings McKenzie, 23, and Jordan, 17, so they, too, could enjoy the thrills of horse ownership. She also adopted from New Vocations a 17-year-old named Noble Cam who made $505,021 in his career, and gave him a safe place to live out his years on a small farm the family owns.

Though just 11, she soon will speak at a meeting of Altrusa Int., a non-profit organization that focuses on community service, literacy, education and environmental issues.

MJB Got Faith’s next race will be in the Ohio Sire Stakes finals Sept. 3 at Northfield, where he will look to take home the winner’s share of a $250,000 purse. That would put another $125,000 into young Breana’s pocket and give the scriptwriters a few more pages that will bring to life the real life fairytale of a little girl, good deeds and a good horse.