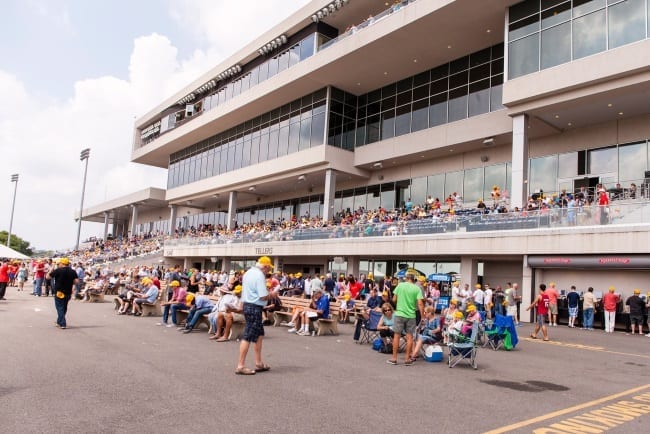 Jeff Gural responds to accusation that he reneged on a promise to thoroughbred horsepeople to give them a 10 per cent cut of revenue if a casino comes to the Meadowlands.

Meadowlands Racetrack chairman Jeff Gural said Thursday that he is “really shocked” that (Monmouth Park) advisor Dennis Drazin “came out and tried to make me look bad” this week.

In an Asbury Park Press story by Stephen Edelson published Thursday, Drazin was quoted as saying Gural has reneged on an alleged promise on casino revenue to be directed to purses should New Jersey voters authorize casinos in the north of the state and the Meadowlands is selected as a site for one of the casinos.

“Gural looked for our support to get all the votes from the Monmouth and Ocean county legislators to get the referendum on the ballot,” Drazin said. “He promised us he would insure that we would get at least 10 per cent by making up the difference between the two per cent (currently allocated to go to purses) and 10 per cent out of his end if he had to, which would be $80 to $100 million, to be split between thoroughbreds and standardbreds. And no sooner did the referendum get passed did he renege on that promise. And now he is trying to solicit our support from the referendum and he basically has refused to discuss giving any type of guarantee to Monmouth Park.”

When contacted by Harness Racing Update Thursday afternoon, Gural said he didn’t make a specific commitment to either the thoroughbred or standardbred horsepeople on casino revenue sharing because he does not know, exactly, how much is even possible. “I don’t know what the tax rate is, I don’t know who my partner is going to be,” he said.

Gural said he did not understand Drazin’s strategy.

“I don’t see how he’s better off if (the casino initiative) doesn’t pass,” Gural said. “I’ve made it clear to Dennis that I’m a horseman. I will not do anything that would not allow horse racing to be viable… Dennis is a friend of mine, but I don’t understand his logic… Fortunately, the (Asbury Park Press) story was okay because the reporter quoted me correctly as saying that I would guarantee that the horsemen are not left out and the industry is able to survive and support itself. But for Dennis to say he wants me to promise him $150 million, I don’t think that makes a lot of sense.”

Monmouth Park thoroughbred horsepeople are in line to share the horsepeople’s cut of the revenue if a casino is granted at the Meadowlands. Gural said any perceived friction between the two struggling breeds in New Jersey, “doesn’t help and the whole thing frustrates me.”

This week it was also announced that Triple Five, the developer behind the much-delayed mega-mall project adjacent to the Meadowlands and Met-Life Stadium will receive an $800 million bond offering from the state designed to help put the long-stalled American Dream Meadowlands shopping and entertainment complex back on track. In a story on newjersey.com, reporter John Brennan wrote, “the $800 million is in addition to $350 million in tax breaks that the state Economic Development Authority has already approved, along with another $1.5 billion in private financing.” The article quoted Tony Armlin vice-president of development for Triple Five as saying, “Triple Five was brought in to revive the project in 2011 after two previous developers failed to complete it. Since then, it has spent $600 million, with much of those costs related to the construction of the foundation for a 639,000-square-foot indoor water and amusement park — with DreamWorks Animation characters in starring roles — similar to a park complex at Triple Five’s West Edmonton Mall in Alberta.”

Triple Five has also indicated that, if voters approve casinos in the north of the state, it would likely bid to have a casino at the mall — like the one it has at the West Edmonton Mall — in direct opposition to Gural’s site.

“I’m not really that worried about Triple Five,” Gural said. “They just got the state, somehow, to get involved in trying to raise another $800 million in bond financing. They said that if everything goes right, they wouldn’t complete the project until late 2018. So, my sense is that they’ve got their hands full just getting this project completed. We’re up and running. We could convert to a casino in a few months. I think we’re on the right side of the (sports complex).”

Asked for his thoughts on how the mall project, which has been stalled for 15 years, could receive help to the tune of $800 million when horse racing is struggling in the state, Gural said, “It’s frustrating. The only one that has really accomplished anything is me. The money that was diverted to Atlantic City didn’t accomplish anything. Atlantic City went down the tubes and took our money with it and, at the same time, destroyed our breeding industry. Triple Five is still floundering. We opened on schedule and we continue to operate. It’s frustrating, but that’s life.”

Gural said polling on the casino question continues to be “a toss up,” but his pro-casino lobby just started its campaign this week, with the opposition set to ramp up its message next week.

“They’re basically tying into the mood of the country, which is, ‘All government is bad and why would you trust the people in Trenton to actually use this money the way they promised.’ It’s interesting. It’s obviously a message that appeals to the voters. I don’t know. We’ll see.”

Gural called on all horsepeople to support the casino initiative — including financial support — saying a casino at the Big M is critical to horse racing’s survival in the state.