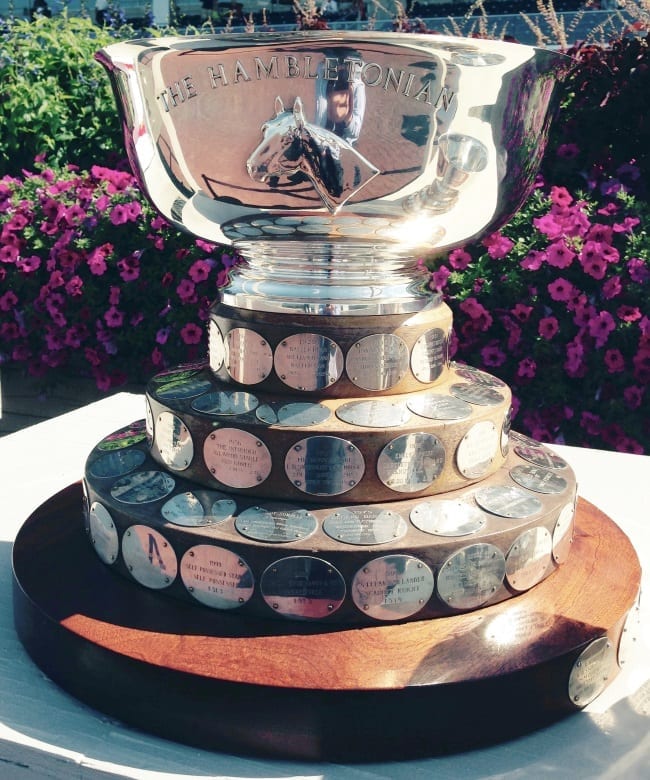 Also on tap for Saturday’s Hambletonian Day card is the Hambletonian Oaks, a rematch of the Big Three in the U.S. Pacing Championship and Pure Country taking on the boys in the Cane Pace.

Cable channel CBS Sports Network will air live coverage of the Hambletonian from 4-5:30 p.m. (EDT) on Saturday. The U.S. Pacing Championship and Hambletonian Oaks also will be featured during the 90-minute broadcast. First race post time on Hambletonian Day is noon.

Southwind Frank, who will have regular driver Yannick Gingras in the sulky for trainer Ron Burke, was made the 4-5 morning line favorite in his elimination. Bar Hopping, with Tim Tetrick driving for trainer Jimmy Takter was made the 9-5 choice in the first division.

The season-long favorite to win the Hambletonian, Southwind Frank enters the event off a 1:52.1 victory in the slop Saturday night in the Reynolds Memorial Stakes at the Meadowlands. It was Southwind Frank’s fifth win in six starts this season and his 16th in 18 lifetime races. He is owned by the Southwind Frank Partners, a group that includes Burke, and has earned $1.2 million in his career.

In 2015, Southwind Frank received both the Dan Patch and O’Brien Awards for best two-year-old male trotter.

Southwind Frank, a son of 2009 Hambletonian winner Muscle Hill out of the mare Flawless Lindy, gives Burke a top Hambletonian contender for the second consecutive year. Last year, filly Mission Brief won her elimination and finished second to Pinkman in the final.

“I’m very happy with the draw; I think it’s a perfect spot for him,” said Shannon “Murph” Murphy, Burke’s assistant trainer in New Jersey. “He came out of his race last week very good and has been awesome so far this week. He was very good in his last start and was wrapped up. Yannick was happy. He said it’s the best he’s been since the New Jersey Sire Stakes final (on June 4). We’re happy.”

Burke also will send Make Or Miss to the Hambletonian.

Takter is going for an unprecedented third consecutive win in the Hambletonian and would equal the record for career victories with a triumph Saturday. Takter will send five horses to the Hambletonian: Bar Hopping, Lagerfeld, Love Matters, Jimmy William, and Reigning Moni.

Also a son of Muscle Hill, out of the mare Cocktail Hour, Bar Hopping has won three of 17 career races and hit the board a total of 12 times. He heads to the Hambletonian off a win in the Dr. Harry M. Zweig Memorial on July 24 at Vernon Downs.

“Bar Hopping is my best chance,” Takter said. “I think this year is very open. Southwind Frank stands out a little bit more maybe than most, but I think the game is wide open. I like Bar Hopping. I think he can go with both (Southwind Frank and Marion Marauder). I think I have him on the right plan. I’m really happy with how he’s progressing. This is the week we’ve been shooting for with him for two years.”

The second choice at 3-1 in Southwind Frank’s elimination is Marion Marauder.

Marion Marauder, another son of Muscle Hill, has won four of five races this year, including the Goodtimes Stakes and a division of the Stanley Dancer Memorial, and five of 18 in his career while earning $476,891. He is trained by the husband-and-wife team of Mike Keeling and Paula Wellwood and is owned by their son, Devin Keeling and Paula’s mother, Jean Wellwood, widow of Canadian and U.S. Hall of Famer Bill Wellwood.

Last year, the colt finished second to Southwind Frank in the Breeders Crown and William Wellwood Memorial.
Other trainers with multiple entries in the event are Julie Miller (Milligan’s School and Sutton) and Ake Svanstedt (Mavens Way and The Royal Harry).

In addition to drawing the Hambletonian on Monday afternoon at the Meadowlands, draws were conducted for the Hambletonian Oaks, John Cashman Memorial, Cane Pace, and U.S. Pacing Championship.

Top older pacers Always B Miki, Wiggle It Jiggleit, and Freaky Feet Pete will meet in the U.S. Pacing Championship.

Filly Pure Country will challenge the boys, including Meadowlands Pace winner Control The Moment, in the Cane Pace. The race attracted 11 entries, so it will be contested at the extended distance of one-and-an-eight miles. Pure Country was last year’s Dan Patch Award winner for best two-year-old female pacer and has won 16 of 19 career races.