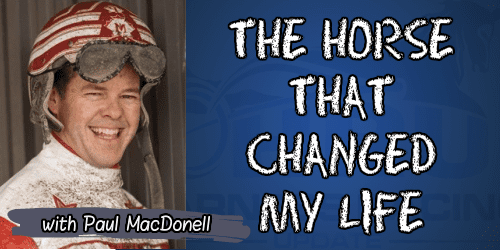 The Horse That Changed My Life: Paul MacDonell

Paul MacDonell knows you’re expecting him to say Somebeachsomewhere is the horse that changed his life. MacDonell was, after all, the only man to ever drive the world champion pacer and Hall of Famer in a pari-mutuel start.

There’s no question that Somebeachsomewhere was the best horse MacDonell has ever driven. But if it wasn’t for Cavans Jovial, MacDonell isn’t sure whether he would have had the kind of career that led to Beach in the first place.

MacDonell was just 21 and racing at Kawartha Downs near Peterborough, ON in the spring of 1984 when Cavans Jovial came into his life.

“I happened to drive her at Kawartha Downs in an overnight race,” MacDonell said. “I liked the way she went. The owner was there and I asked him, ‘Would you be willing to sell her?’ Sure enough, he came with a price.”

MacDonell said the price was $12,000 and he, his father, Blaise, and Bob Hayes jumped at the chance to buy Cavans Jovial, who was in the early stages of her sophomore season.

“She went on and made $100,000 in the Ontario Sires Stakes (OSS) that year,” MacDonell said. “She was a horse that launched me into driving in the OSS. She sprung me to a different level. I can remember she raced against Annie Ivy. She raced against her and Ted Jacobs had a really nice mare. There were three or four really nice ones and she raced right with them. We were riding on Cloud 9 to be able to compete against those horses.”

MacDonell went on to win more than 5,300 races and post earnings exceeding $116 million. In all likelihood, he will always be associated most with Somebeachsomewhere

“What amazes me today is how people still come along and want me to sign stuff that has Beach on it, or a program, or something as simple as a card — anything that has Beach’s picture. I just find that amazing eight years later,” MacDonell said. “People ask about him. They ask, ‘Have you seen him lately?’ They’re truly interested in the horse. I think that’s kind of neat.”