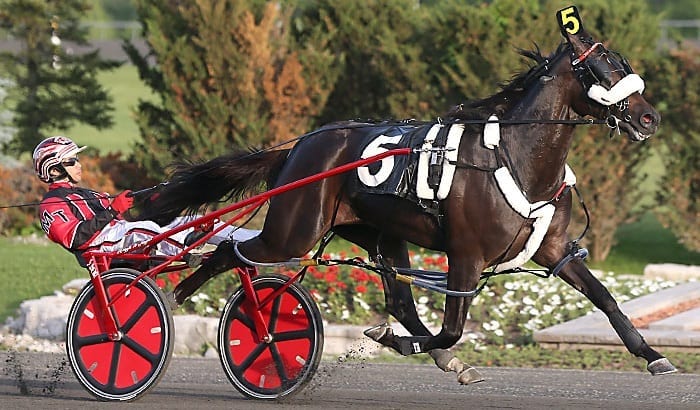 On the brink of $3 million

Wiggle It Jiggleit overcame a difficult opening half and cruised to victory in the $260,000 Joe Gerrity Jr. Memorial Saturday at Saratoga to push his career earnings to $2.99 million.

Wiggle It Jiggleit pushed his career earnings just shy of $3 million and posted his 10th win in 15 starts this year when he overcame a tough early trip Saturday (July 23) to win the eighth edition of the $260,000 Joe Gerrity Jr. Memorial Pace at Saratoga Casino Hotel.

Starting from five-hole on the half-mile track, Wiggle It Jiggleit and Montrell Teague were parked three-wide through the :26.3 opening quarter by post one starter Bit Of A Legend N (Jordan Stratton) and post three starter All Bets Off (Matt Kakaley).

By the :54.4 half, All Bets Off had cleared to the front and Wiggle It Jiggleit was still outside, but second and looming. Teague had his pacer on the front before tripping the three-quarter timer in 1:23.4 and cruised to a two-length score over Bit Of A Legend N in 1:51. All Bets Off held on for third. Sunfire Blue Chip (Mark MacDonald) was fourth and Artistic Major was fifth.

Racing fans, who came to see the superstar, roared in appreciation as Wiggle It Jiggleit made his way to the winner’s circle.

The victory was the 33rd in 42 career outings for Wiggle It Jiggleit (Mr Wiggles—Mozzi Hanover) and it pushed the four-year-old gelding’s bankroll to $2,992,162 for owner George Teague Jr. Inc. of Harrington, DE and the Teague Racing Partnership LLC of Boynton Beach, FL.

Wiggle It Jiggleit, trained by Clyde Francis, has earned $803,667 this year.