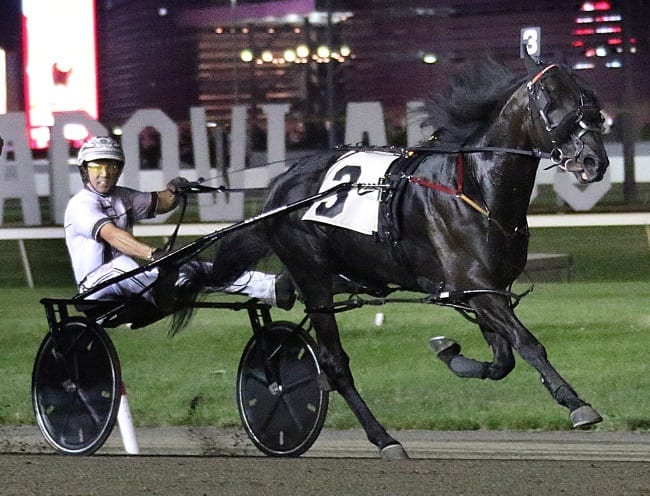 Trainer Brad Maxwell scored the biggest win of his career when Control The Moment edged out Racing Hill in the $732,050 Crawford Farms Meadowlands Pace.

Trainer Brad Maxwell has gone from horse racing to hockey and back to horse racing. After a stint as an assistant coach in the Ontario Hockey League, he went back to harness racing five years ago. What drove the soft spoken trainer to make the change? Perhaps it was the dream of having another good horse.

Maxwell won the biggest race of his career Saturday night at the Meadowlands when his Control The Moment captured the $732,050 Crawford Farms Meadowlands Pace by a nose over Racing Hill.

“I was never disappointed in the driver or the horse,” Maxwell said. “He’s a once-in-a-lifetime horse. It’s a dream come true. This is why I left hockey.”

Control The Moment was an O’Brien Award champion last year as he reeled off eight wins from nine starts. But he didn’t get off to a good start this year, losing four of his first five races. He was fourth on his home turf in the North America Cup elims and third in the $780,000 NA Cup final Going back to last year, he had lost seven of his last nine.

“He kept drawing badly,” Maxwell said. “It was all the post positions. Simple as that.”

Control The Moment drew the nine-hole in the NA Cup final, the eight for the Max Hempt final and the nine for the lone elimination of the Crawford Farms Meadowlands Pace.

Yet, something clicked in the elims for the Meadowlands Pace. With new driver Brian Sears accepting the assignment, Control The Moment won by a length in 1:49.2, his best performance of the year.

The Meadowlands bettors were so impressed by that effort that they made Control The Moment the 7-10 favorite over morning line choice Racing Hill. Racing Hill had accepted a bye and missed the elims. Many players clearly saw it as a sign that Control The Moment, a son of Well Said—Life’sliltreasure, was back and they liked the fact Sears was the new pilot.

That Control the Moment was struggling with Randy Waples driving and is now two for two with Sears is hard to overlook. Maxwell said the change in drivers has not made a difference.

“Randy did a very good job with this horse,” Maxwell said.
Saturday night, Sears took charge right off the gate. He led by one-and-a-quarter lengths after a half in :53.2.

“I think :53 is pretty comfortable for these types of horses in a final like this so I wasn’t too concerned,” Sears said.

The Pace turned into a two-horse race. Racing Hill, trained by Tony Alagna and driven by Brett Miller, was coming off a win in the Hempt at Pocono and clearly had the ability to win a race of this stature. At the top of the stretch Control The Moment was two-and-a-half in front and looked to be in complete control. But Racing Hill closed with a flourish to just miss by a slim nose.

“It was great to get a spin with him last week and he raced great off the pace and finished up well,” Sears said. “I was real happy with the spot we landed in the post draw (the three hole) and the trip worked out perfect. Brett’s horse (Racing Hill) was getting a little rough around the last turn so I kind of let my horse out a little bit. We made it pretty exciting at the wire, but he raced great. I’m real happy.”

Miller thought he might have had the best horse.

“My colt really responds when I pull the plugs on him,” Miller said. “When I went to pull his plugs at the top of the stretch they didn’t come out; they got stuck. I finally got him out in mid-stretch and he took off. Absolutely, it could have made the difference.”

Check Six finished third. The time was 1:50.2 and Control The Moment paid $3.40. Once one of the leaders of the division, Boston Red Rocks was seventh. It was his fifth straight loss.

The victory improved Control The Moment to 3-1-1 in seven starts in 2016 and pushed his seasonal bankroll over $525,000 and his career balance to the brink of $875,000. Lifetime, Control The Moment is now 11-1-1 in 16 starts for the Control The Moment Stable — Maxwell of Guelph, ON, Howard Taylor of Philadelphia, Ed Gold of Phoenixville, PA, Ben Mudry of Florida and Tara Hills Stud of Port Perry, ON.
Maxwell said he wasn’t sure where Control The Moment would race next but said the Adios was a possibility.