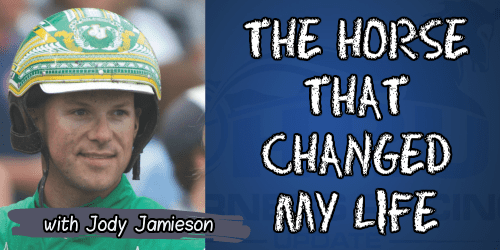 The Horse That Changed My Life: Jody Jamieson

(Editor’s Note: This item originally appeared on the Ontario Racing website in 2016 under a section called For The Love Of Racing which still adds new stories weekly. Harness Racing Update will periodically republish some stories from the archives and plans to add original ones here featuring the stories of participants from across the harness racing world)

Jody Jamieson was just 20 days from his 19th birthday and less than two months removed from racing on the Ontario fair circuit when he was dispatched to Windsor Raceway on Nov. 26, 1995 to race his father Carl’s star pacer Elegant Killean.

“I forget why dad didn’t drive her the week before at Mohawk, but she made a break in the Canadian Breeders and Doug Brown drove her. She just rolled off. She had a tendency to do that late in the stretch if you didn’t know her. Whatever the reason was, she would do it, and she rolled off on Brownie and they were going for $80,000. They ended up finishing last, so I was up on her the next week,” Jody said. “So, I felt a lot of pressure just to make sure she got around there pacing, because she was free-legged.”

Compounding Jody’s anxiety was the fact he had yet to find the winner’s circle in his young driving career and Elegant Killean was in $11,000 main event against top older pacer Draft Day and leading Windsor driver Al Cullen.

“She pretty much pulled you out of there anyway, but I barreled her out of there to the lead and got a good lead. I’ll never forget it. I had Al Cullen sitting on my back. He was always very animated and could really get a horse to go and to live. I could hear him yelling at his horse around the last turn as we straightened up down the stretch,” Jody said.

“I was posing a little bit and I went to hit the wheel disc to drive on… and, whatever it was, the vibration or the bang off the wheel disc flicked the whip out of my hand. I didn’t throw it away on purpose. I dropped it. That was right at the head of the stretch and here was Draft Day and Al Cullen coming off my back and I thought, ‘Oh my God, I dropped my whip and I’m going to lose the race.’ I just kept yelling at her and she kept pacing and she won.

“Good horses overcome stupid drives or bad drivers or whatever. I really felt like a fool that day because I was going to hit the wheel disc and really showboat a bit.”

More than just the horse that delivered the first of Jody’s more than 7,300 victories in a most memorable way, Elegant Killean changed his life — and that of his family. Carl purchased the daughter of Run The Table—Ore Dana for just $9,000 at the 1992 Forest City Yearling Sale. She went on to earn just shy of $800,000 in her nine-year racing campaign with a record of 39-23-11 in 123 starts. Carl Jamieson went on to earn a berth in the Canadian Horse Racing Hall of Fame.

“Elegant Killean was always special to me and gave us the opportunity to travel to Mohawk and the Meadowlands and to the big time,” said Jody, who has purse earnings approaching $115 million to his credit in more than 42,000 career drives. “She was my dad’s first really good horse. She really made it possible for my dad to buy a bit better pedigreed horses and she was a free-legged world champion at two and three.

“She was the horse that changed my life.”