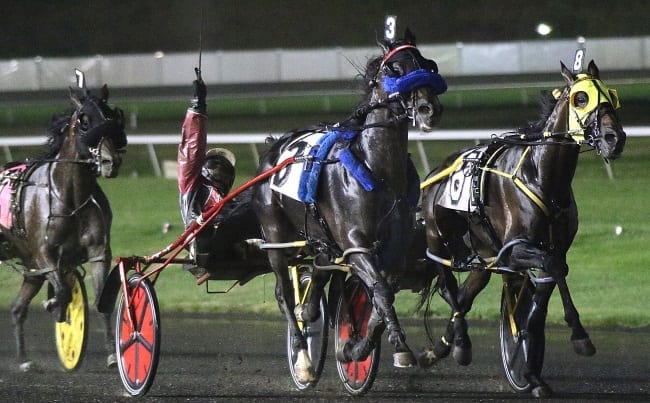 Wiggle It Jiggleit rebounded from his loss in the Ben Franklin with a 1:47.2 career-best mile in the slop while defeating nemesis Freaky Feet Pete in the $250,000 Graduate Final for pacers Saturday at the Meadowlands.

One week after finishing third in the Ben Franklin, defending Horse of the Year Wiggle It Jiggleit got back on track in a major way Saturday (July 9) with a victory over chief rival Freaky Feet Pete at the Meadowlands in the $250,000 Graduate Series Final for four-year-old pacers.

“He’s a great horse who likes to do what he does,” said Wiggle It Jiggleit’s principal owner George Teague Jr.

Wiggle It Jiggleit was away well from post three. Freaky Feet Pete also left quickly and while parked had the lead at the quarter in :25.3. With Wiggle It Jiggleit right behind him, Pete hit the half in :53.1 and three-quarters in 1:20.4 and appeared to get a bit of separation as they turned for home. But then driver Montrell Teague hit the gas pedal, and once again, Wiggle It Jiggleit had more than enough fuel left in the tank. He drew clear in the final sixteenth to return $3.00 to win as the 1-2 favorite.

A week earlier at The Downs at Mohegan Sun Pocono, Wiggle It Jiggleit was third behind five-year-old Always B Miki — who was ineligible for the Graduate which is reserved for four-year-olds — and Freaky Feet Pete.
Musical Rhythm wins Graduate trot

John Campbell gave Musical Rhythm a perfect steer from post 10, and after yielding the top before three-quarters, came back for more in deep stretch to storm home a convincing two-length winner in the $250,000 Graduate Series final for four-year-old trotters.

“This little guy amazes me all the time,” said winning trainer Benoit Baillargeon. “But you have to be careful with him in the turns.”

That is exactly how Campbell handled things.

Musical Rhythm left quickly and was parked in second as Crazshana hit the quarter in :27.4. Musical Rhythm took over shortly thereafter, trotting past the half in :55.4. Wings Of Royalty, who got off the rail at the three-eighths and provided live cover for even-money favorite Maestro Blue Chip, ranged up to get the top at three-quarters in 1:23.2 as Campbell handled his charge with care through the far turn.

Through the stretch, Maestro Blue Chip did not fire, and nearing the wire, Campbell swung Musical Rhythm out of the pocket and exploded home in the final sixteenth to record the win in 1:51.2, a lifetime best. Centurion ATM, a 30-1 longshot, finished second, with Crazshana third. Maestro Blue Chip faded to sixth.

“He let the guy go on the turn,” said Baillargeon of Campbell permitting Wings Of Royalty to get the lead. “But then he swelled right up.”

Musical Rhythm returned $12.20 to win as the third betting choice for owners Santo Vena of Brampton, ON, Nunzio Vena of Bolton, ON, Claude Hamel of Ayer’s Cliff, QC and Baillargeon, who lives in Guelph, ON. Musical Rhythm has now won 12 of 14 starts this year and $276,823 of a career total of $362,344.

For Campbell, it marked his second consecutive win in the Graduate for trotters. A year ago, he guided JL Cruze to victory lane in 1:49.4, the only sub-1:50 mile on the trot in Meadowlands history.