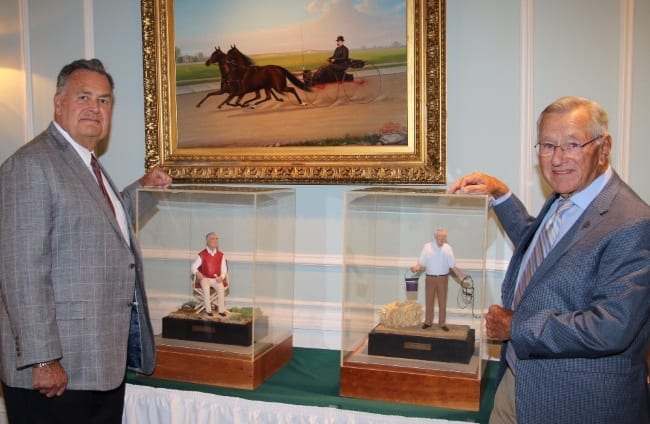 Keller was also a longtime industry executive, serving as executive chairman of the Hambletonian Society and a director of the USTA. He thanked his parents, wife, children and nephews for their help in supporting his harness racing career.

“This is not an award only for me,” he said. “It’s for the family and my family put me in this position. I’m a very blessed person.”

Nickells, who has been training horses for 70 years, first gained prominence as the trainer of such horses as Kentucky, Batman, Fast Clip, Combat Time and Sprite Rodney. He vaulted on the national stage when he trained six pacing fillies that took divisional honors in the 1980s and 1990s: Follow My Star, Central Park West, Miss Easy, Hazleton Kay, Immortality and Freedoms Friend. He was named Glen Garnsey Trainer of the Year in 1991.

The trainer, who turns 88 on July 5, shared a recent conversation he had with fellow trainer Peter Wrenn.

“Pete said, ‘There’s nothing to it. Just get up there and start talking like you are trying to sell someone a horse.’”

David Carr, recently retired director of information and research at the USTA, founded that department in the mid-1980s and headed the group for more than 30 years. He was integral to the development of the Pathway online statistical database, the Trotting and Pacing Guide, Crosses of Gold, sales pedigrees and state stallion directories. He thanked Dean Hoffman for hiring him at the USTA, along with Stan Bergstein for calling attention to his work.

“When you wander through the museum, you get a chance to see the names and images of the men and women who created and advanced the sport,” said Carr. “And they were giants. There are many giants here tonight. When we reach for the stars, we stand on the shoulders of giants. When we try to reach farther into the frontier, we walk along a path that was blazed by giants. I have my own giants that I would like to recognize tonight.”

Over a career spanning four decades, Connors worked as a sire stakes administrator, track publicist, public handicapper, track announcer, race timer and charter and magazine columnist. He’s also been an USHWA director for 23 years and the organization’s national secretary since 2002. He thanked the industry leaders who helped him in his formative years for helping him enter the Hall of Fame.

“Look at some of the groups I’ve worked with,” said Connors. “Four of the first five people that hired me are in the Hall of Fame: Marv Bachrad, Bruce Stearns, Dean Hoffman and Jim Lynch. When I worked for the USTA, I worked with six Hall of Famers: Dean, now David (Carr), John Pawlak, Carol Cramer, George Smallsreed and Ed Keys. How could I miss?”

“This horse was a life-changer for us,” said Blair Burgess, whose wife, Karin, groomed Real Desire. “He allowed us to buy a farm, which we always wanted to do. And to this day — which is probably a bad sign because it was 15 years ago — he was probably the fastest horse I ever had. He had that line gait that Bruce Nickells told me you need in a pacer — no wasted motion.”

“You don’t start in this industry as an owner with Muscle Hill,” said Silva. “You start many years ago with other horses, whether they are claimers or babies or whatever they are. You need a lot of luck; you need a good trainer and a good vet; and you need a lot of money to succeed.”

A trainer and driver for 30 years, Carl Allen is best known for training 1995 Horse of the Year CR Kay Suzie. He was voted Trainer of the Year in 1994. He trained and drove 1998 divisional winner CR Commando and trained 1999 Breeders Crown winner CR Renegade. He died in 2004.

Living from 1846-1877, Princess took a mark of 2:30. In a series of match races in 1859, she pushed Flora Temple to set the all-age record for trotters four times, including the mark of 2:19-3/4 that stood for eight years. Bred to Hambletonian in 1863, she produced Happy Medium, whose sire line still flourishes today.