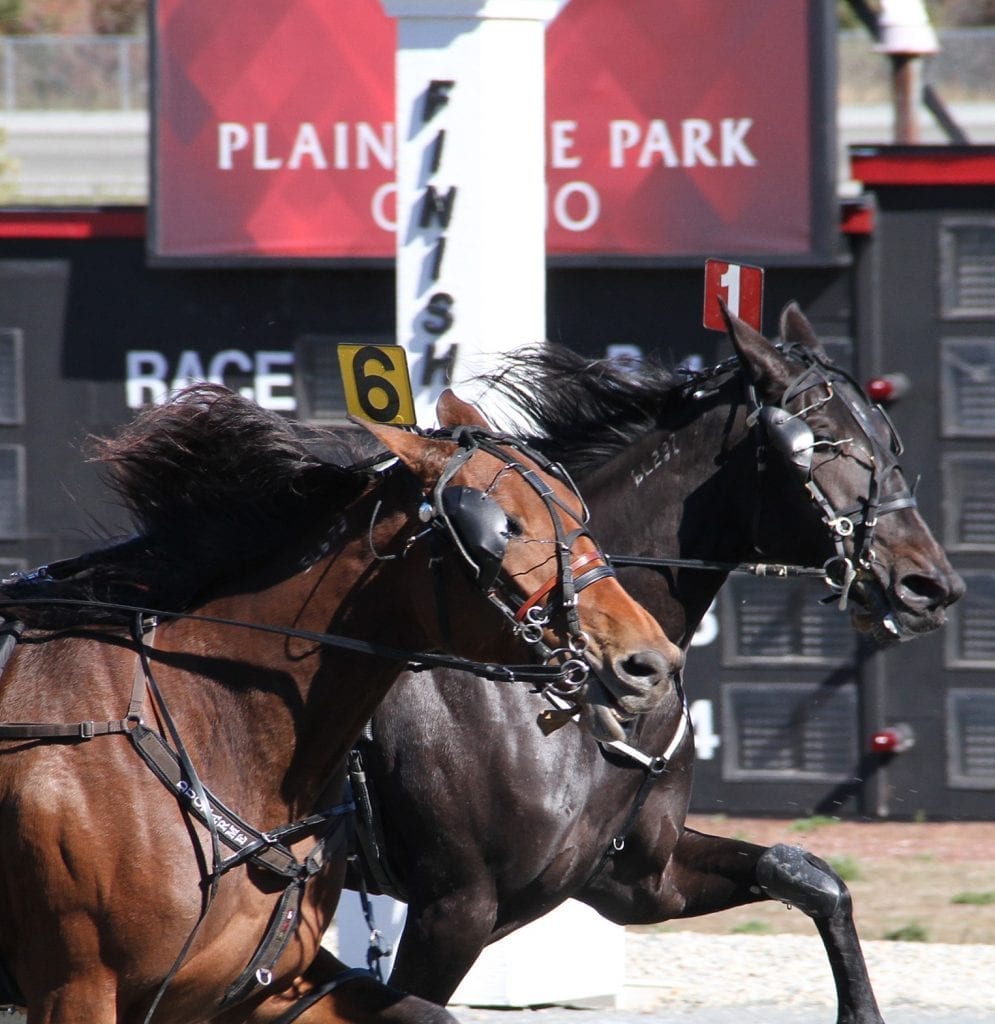 An increase in the standardbred share of the Race Horse Development Fund from 25 to 55 per cent and a 28 per cent increase in live handle at Plainridge Park are just two indications the harness racing industry is on the rise in Massachusetts.

It’s been a banner year in the Massachusetts harness racing industry, but the topper likely came Monday (June 20) when the standardbred sector’s percentage of a key development fund was more than doubled from 25 to 55 per cent.

The Massachusetts Gaming Commission’s (MGC) Horse Racing Committee (HRC) voted unanimously (5-0) to change the split of the Race Horse Development Fund (RHDF) from 75-25 in favor of thoroughbreds to 55-45 in favor of standardbreds, retroactive to Jan. 1, 2016. The decision came four days before Plainridge Park in Plainville, MA celebrated the one-year anniversary Friday of the opening of its casino.

“If people look at where we’ve been and where we’re going, this is obviously a step in the right direction,” said Frank M. Antonacci, trainer with Lindy Farms just across the Massachusetts state line in Connecticut. Antonacci is a member of the board of directors of the Harness Horsemen’s Association of New England (HHANE). “I think it gives the industry a chance to prove itself, which I think the harness industry will. Hopefully, this is continued progress.

“The horsemen in New England have been beaten up and have been barely surviving for 20 years. Personally, I grew up with all these men and women and to finally see something going their way is great, because it’s amazing what they do, day in and day out just on hopes and dreams that something like this might happen. We just hope that it’s here for awhile and people can finally start improving themselves and their businesses.”

More than doubling the split standardbreds receive from the RHDF means higher purses are on the way soon said Steve O’Toole, Plainridge Park’s director of racing.

“I think it’s going to be a substantial increase for them, but it’s not going to translate into doubling the purses. We haven’t set aside any money. We’ve been, pretty much, giving everything out across the board up to date. We have some meetings coming up next week with the horsemen’s group to go over some plans, but I think we’re on the same page as far as what we want to accomplish.”

That includes the prospect of adding some stakes races and a few big event days.

Peter Goldberg, the standardbred representative on the HRC, said, “it was a great week, but it took a lot of hard work by a lot of people. It was a real group effort by a lot of horsemen.”

The fact Plainridge will have a 115-date live harness meet this year and the thoroughbreds are scheduled to have just six cards at Suffolk Downs and a 15-day meet at the Brockton Fair, had an impact on the decision to change the splits, but more indirectly than it first appears. Goldberg said the HRC has five criteria it must look at to determine the split between the breeds and “live racing dates actually is not one of the five criteria.” But the number of live dates does influence employment figures, which is one of the criteria.

“The standardbreds had maybe 60 per cent out of the total employees in the two industries. But, what the committee was able to do was say, ‘Even though the employment numbers are fairly even, the standardbreds, because their employees are there for 115 (live) days and the thoroughbreds only had six days, that changes that number,” Goldberg said.

“Another one of the criteria is live handle. In the past the thoroughbreds have always had a bigger live handle, but in 2015 the standardbred handle was higher because it was affected by the number of race days. That’s an important piece. The live race days affect the handle and they affect the employment numbers. They affect all the different relative needs of each industry.”

Antonacci said the initial 75-25 split of the RHDF in favor of the thoroughbreds came from projections that Suffolk Downs, home to the runners, would get a gaming license.

“When the conversation was first had amongst this committee, they were operating on the premise that there would be two racetracks, one of them would be racing thoroughbreds, one would be racing standardbreds and they’d be racing equal-length meets. Fast forward two years later and what reality happened is Suffolk didn’t get a gaming establishment and Plainridge did. Last year, Plainridge raced 100 days, which was statutorily required and Suffolk raced three days, yet 75 per cent of the funds were going to the thoroughbred industry and 25 per cent to the standardbred industry,” Antonacci said.

Considering the dearth of live thoroughbred racing in Massachusetts now, the split could have been even more in the standardbreds’ favor, but Antonacci said the harness industry made a concerted effort to work with its thoroughbred cousins.

“I’m in the standardbred business and the thoroughbred business. I think what is best for all of horse racing is best for everybody there,” he said. “So, we hope that the more equity in the split will foster some more cooperation between the two breeds.”

O’Toole said the Commonwealth of Massachusetts currently mandates that 80 per cent of each breed’s share of the RHDF (which is generated by casino gaming) be used for purses. Sixteen per cent is allocated to breeders through the state’s residency mare program and four per cent goes to a pension and welfare benefit program. He added that casino traffic is already bringing more customers to the races.

“It’s a combination of a lot of things, but we are experiencing a lot of new customers — old customers coming back to the track and new customers as a result of the casino opening,” O’Toole said, adding that live handle at Plainridge Park is up 28 per cent in a year’s time.

“We’ve experienced a pretty good year as far as our racing product and attendance since the casino opened… All of our handles have been up — simulcast, live, our host handle — which is good news for us and the horsemen. So, all things are looking pretty good. Then to be able to have some more purse money to do some more creative things with and get some money in our horsemen’s pockets is always a good thing.”

It all adds up to a jurisdiction on the rise, said Antonacci.

“I’m extremely optimistic on racing and breeding in Massachusetts,” Antonacci said. “It’s a hidden gem of harness racing just because the funding hasn’t been there. I think we’re moving in the right direction. I think we’re going to have really competitive purses with competitive racing and I think there’s a progressive approach between management and horsemen where you’re going to see hopefully some of these initiatives that everybody agrees have to happen, but don’t happen at some of these other racetracks.”

Goldberg said for many years purses haven’t been high enough for local horsepeople to be able to pay their bills. Increased purses “will allow them to pay their bills and, hopefully, upgrade their stock,” he said. “I think that’s the key. It’s going to be incumbent upon the local horsemen not to just take the money and run, but take the money and reinvest it into the product, into horse racing in Massachusetts.”

Antonacci said the intent is to take care of local horsepeople, “but I think you’re also going to see an active approach to expand and attract people from outside the state to either come back to the state or invest in the state.

“I think a big part of this story is the breeding program in Massachusetts, which I think in a lot of ways gets it right. The Massachusetts-bred program is a residency mare program, where the mares have to be there by December 1st and remain there until foaling. So, you have an opportunity to even buy a mare in Harrisburg this year or the mixed sale coming up in July and bring your mare to Massachusetts and have them be a New Jersey-bred or New York-bred or Massachusetts-bred starting this year. It’s a low barrier to entry on that front, which I think is important. I think when you talk about a gaming bill designed to increase the agri-effect and economic impact within the state, I think the way their residency mare program is set up, I think it really lends to that and promotes that.”

“A couple of our crops didn’t enjoy any of the bump in the purses. That didn’t come until last year,” he said

Now that the money is now flowing, Antonacci said he is bullish on the future in Massachusetts.

“I think the infrastructure and backbone has been there, but there was just no funding. Now we’re getting to a place where there is funding. I think it really will change the whole model and I think people will find it an attractive place to race and breed and invest,” he said.