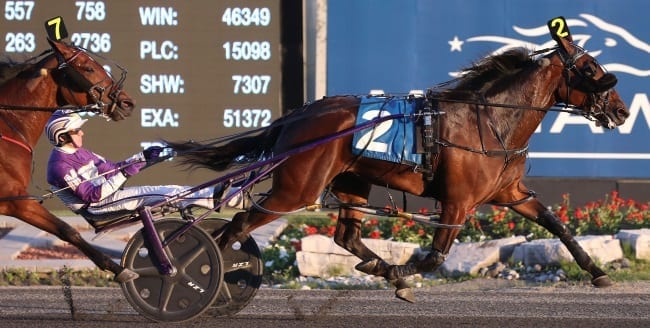 Darlinonthebeach is attempting to join her mother and grandmother as Fan Hanover champions in the memory of White Birch owner Michael Parisi.

There’s a lot to live up to when grandpa, grandma and dad are all Hall of Famers and your mom was twice a division champion with $2.9 million in earnings to her name, but Darlinonthebeach (Somebeachsomewhere—Darlins Delight) looks to have the talent and poise to represent her family with distinction in the $438,000 Fan Hanover Final tonight (June 18) at Mohawk.

A victory in the Final would accomplish a rare feat by making her the third generation of her family to win the Fan Hanover and put her in the good company of her granddam, Canadian Hall of Fame inductee Town Pro and dam Darlins Delight (whose sire Bettors Delight owns a place in both the U.S. and Canadian Hall of Fame), who won the 1990 and 2006 editions, respectively.

“It’s hard to imagine finding a horse with a better pedigree… that’s just what everyone wants to get,” said trainer Nancy Johansson.

Luckily for Johansson, driver David Miller and owner/breeder White Birch Farm of Allentown, NJ, Darlinonthebeach appears to be much closer to a chunk off the old blocks, rather than a mere chip.

“We could tell right away when she was born that she was going to be bigger. Darlins Delight wasn’t very big herself and this filly is probably twice the size of her mother now,” marveled Steve Williams, farm manager at White Birch.

“It’s definitely the magic cross, to get the size and length… and attitude she got from her mother. Darlins Delight had to take one-and-a-half strides for everyone else’s stride and so it was all that she had a big, big heart, but it looks like this filly got it all with the size and the heart.”

With an impressive win in last week’s Fan Hanover elimination in 1:50.2, Darlinonthebeach pushed her record to five wins in six starts in 2016, after sporting a record of 2-5-2 from 10 starts and $215,00 last season and playing bridesmaid on several occasions to two-year-old champion Pure Country and O’Brien Award-winning L A Delight.

To claim victory in the Fan Hanover she will have to get the best of those two rivals, not to mention the rest of a classy field of fillies, including fellow elimination winner Good Will Hanover.

For Darlinonthebeach, the transition from two to three has been nothing but positive, with major strides in both growth and maturity to go along with a fair bit of tinkering by her trainer on her bridle and bit.

“Last year, she was a little bit of a head thrower, she just wanted things done her own way. This year, she’s more into letting us dictate how things get done. So I had a special bridle made for her, a telescope bridle with some holes on the side, and, knock on wood, she hasn’t lost since we put it on her. Hopefully, she keeps going that way,” said Johansson.

“She was a bit like a baby last year, a bit immature physically and she’s grown up quite a bit and filled out. Now, her mind is a little more in the game and she understands what she’s out there to do, so she’s definitely matured since last year. She always had a lot of talent, she just needed to get everything together.”

Despite such maturity, there were no chances taken for the week in between the Fan Hanover elimination and Final with the filly shipping home to New Jersey on Sunday morning, then making the return trip back to Canada on Wednesday.

“She’s a filly that is very much into routine. She’s got her own private field that she goes to every day at an exact, certain time. She jogs at the exact same time every day,” said Williams.

“She seemed a little sour last year when we left her up there for the Breeders Crown and she ended up getting a little hot with David and ran into the bike in front of her (finishing sixth). She just didn’t seem happy. And she’s such a happy filly now when she’s in her routine so that’s why we brought her back home, just so she could be happy for this week leading up to the Final.”

This happy filly has been good for the soul at White Birch Farm, which is still absorbing the loss of its owner Michael Parisi, who passed away last December at age 51.

“Right now, it’s business as usual and nothing is changing. We’re operating just as we would if Michael were still here, but it’s bittersweet sometimes because he put a lot of love and time and effort into this, getting these breedings just right and having his champions,” said Williams.

“And that’s the one thing he loved more than anything, watching something that he bred go on to be a world champion or great horse. This is one of those times he’d definitely be enjoying right now.”