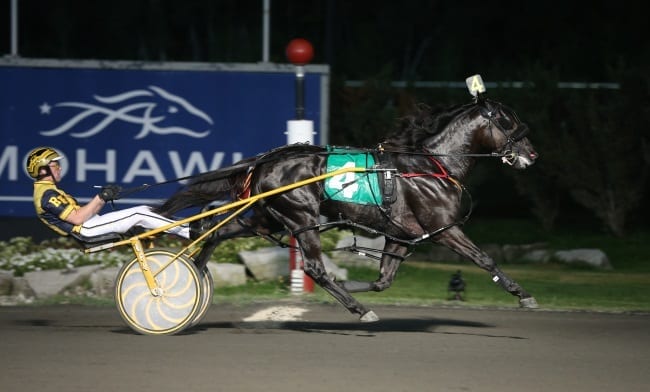 The Ontario breeding farm put together a group to buy a 13 per cent share in a colt many people pegged as the pre-season favorite to win the Pepsi North America Cup.

Tara Hills Stud in Port Perry, ON has brokered a deal to purchase 13 per cent of Pepsi North America Cup hopeful Control The Moment on behalf of some 10 partners. Price was not disclosed, but the deal does not include breeding rights.

“I don’t have a deal in place for him to stand stud, but, obviously, (Tara Hills gets) first dibs,” said Control The Moment’s part-owner Howard Taylor of Philadelphia. “But there’s been no commitment whatsoever that we stand the horse at Tara Hills.”

Control The Moment, a son of Well Said out of the Life Sign mare Life’sliltreasure, was purchased for $47,000 at the 2014 Lexington Selected Yearling Sale by Taylor, Ed Gold of Phoenixville, PA, Ben Mudry of Boca Raton, FL and the colt’s trainer, Brad Maxwell, of Guelph, ON. Control The Moment won eight of nine starts and $347,757 in 2015 and was named Canada’s two-year-old pacing colt of the year.

Tara Hills’ owner David Heffering said he thought Control The Moment might have been out of his price range, but he called some colleagues who were interested in the horse and the deal was finalized this week.

“Everybody took a pragmatic view of this. First off, we’re buying into a racehorse and let’s hope that things go along well for him. After that, you look at a stud career. Anything can happen,” Heffering said. “The horse has a value already. He was two-year-old pacing horse of the year last year (in Canada). His record speaks for himself as a two-year-old. He’s got a value there to be a stallion. When I went down and looked at him, you couldn’t help but fall in love. First of all, his pedigree is good enough to be a stallion and then when you looked at the individual himself, he’s a great-looking horse. He has all the pieces to be a great racehorse and deserves to go on to be a stallion.”

Taylor and Heffering declined to disclose the purchase price, but Taylor said, “it was a lot of money. It was top dollar. They weren’t getting in cheap.”
The deal, which transfers ownership of the horse to the Control The Moment Stable, came at the same time a potential deal fell through that would have given a New Zealand farm 25 per cent ownership and Control The Moment’s southern hemisphere breeding rights.

“Lawyers screw everything up. You’ve got to know that. I hate lawyers,” Taylor quipped. “We’ve been talking to some people in New Zealand since November, December. They proposed a price. We had thought about it and they were supposed to get something together. In the meantime, I guess the horse came through the winter well and his price went up as he was training down and as we were incurring tremendous costs in staking and training and insurance. We took all the risks, so the price went up. Long story short, we had back and forth, back and forth and we had the framework of a deal in place… In the middle of the whole thing, they got a lawyer to address the contract, which ended up being a 12-page contract on a stud deal.

“In the end, there was so terms and so many things that we had to go back and forth on. The proposition always was, ‘Once he qualified all deals are off, because if he qualifies poorly, you’re not going to want to go through with the deal and if he qualifies great, we’re not going to want to stand by the deal.’ At the 11th hour, they were inserting terms. I’m a lawyer and I pride myself on being as good at reading a contract as anybody and finding any loopholes and all that. They sent me a contract that I didn’t even understand… One of the partners just lost it and said, ‘To hell with these people. I don’t know them. I don’t necessarily trust them. We’re too late in the ballgame.’ The horse had qualified, but had not raced. He said, ‘I think the horse qualified fantastic, so I don’t really want to sell at that price.’ Without him selling, there wasn’t enough to sell to get the 25 per cent. I said, ‘Listen, I feel bad for you guys, but you brought it on yourself. You had six months to work this thing out and you didn’t start until three weeks before. There’s no deal.’”

Control The Moment will start from post three Saturday at Mohawk, in race five, the first of two $50,000 (Cdn) Pepsi North America Cup eliminations. Heffering said his group is excited. “Hopefully, everybody that’s in the group will get down to watch the races and hopefully will get a chance to get in the winner’s circle. You never know. It’s not easy. There are a lot of good horses out there.”
Last Saturday (June 4), Control The Moment made his 2016 pari-mutuel debut and was a strong second in his $57,750 Somebeachsomewhere division at Mohawk.

“He came out of (the Somebeachsomewhere) good. Actually, (Maxwell) said he came out of the race great,” Taylor said. “He had him scoped and everything was perfect. He’s gone over him with a fine-toothed comb and the horse is really full of himself. So, we’re looking forward to having some fun.”