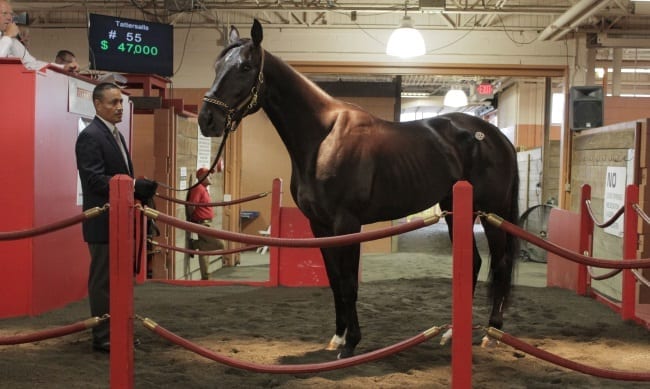 story by Dave Briggs | photos by Aaron V. Re

Coach Tom Coughlin led the New York Giants to two Super Bowl titles. Sunday, just across the parking lot from the Giants and Jets’ MetLife Stadium, Coughlin’s equine namesake was the star of the Tattersalls Spring Mixed Sale in the paddock at the Meadowlands Racetrack.

Coughlin the three-year-old trotting colt, topped the sale with a bid of $65,000 made by Vito Cucci of Belmar, NJ. Coughlin, a son of Credit Winner out of Kelly Hall, has a record of 4-0-1 in six starts this year and won a $15,000 New York Excelsior test in his last start (May 29) at Tioga Downs for trainer Ron Burke.

Three horses tied for the next highest priced sold at the Spring Mixed Sales with identical bids of $50,000 — Rockin Ronnie a three-year-old son of Rocknroll Hanover—Flibbertigibbet sold to Terry Langille of Brantford, ON as agent for Maple Leaf Racing; Roll Away Joe a three-year-old gelded son of Roll With Joe—Chatelaine purchased by Howard Taylor of Philadelphia and Better Said, a four-year-old Well Said—Ultimate Bet mare who has earned nearly $170,000 lifetime was purchased by Kyle Spagnola of Saratoga Springs, NY.

Langille also bought the next highest priced horse sold — three-year-old Somebeachsomewhere—Be Bop A Lula mare Jump Jive And Jam — for $47,000 and was the sale’s leading buyer with $97,000 in total expenditures.

Technically, the highest bid on the day also belonged to Preferred, but it was a $77,000 buy-back for Summer Side, a Well Said—Beachy Lady two-year-old who finished second in his baby race Saturday (June 4) in a race timed in 1:55 and a last quarter in :27.3

“Summer Side failed to meet the reserve, but we had a lot of interested parties bidding on that horse and we just fell a little short. We’re working on something to consummate a deal post-sale,” Reid said.

The second-highest price fetched was the $67,000 Northwood Bloodstock bid to buy back Capela, a four-year-old Sportswriter—Capelo Rose mare that also failed to meet her reserve price.

“As in most sales, the ones that are okay, have reasonably good lines and look good, I thought sold very well,” said Northwood’s Bob Boni. “We weren’t dealing with anything that could go for a lot of money, off the charts or so much more than would be anticipated.”

Reid, the general manager and director of operations of the sale said, “Tattersalls sales management appreciates all the buyers who came, inspected and bid on horses today. The sale ran smoothly and at a good pace and, at the end of the day, the results for the horses sold indicated it was a good sale.

“Comparatively speaking year over years, obviously we’re disappointed in the number of horses sold and equally disappointed in the number of outs (33) that we had. Sales company management tries to limit that as best as possible, but sometimes it’s just out of our control. Some of these horses may not have been performing up their ability or may have been battling some sickness and some of these horses may be back in our next sale, the upcoming July 31 Mixed Sale at the Meadowlands.”

Boni said, “Unfortunately, there was a fair amount of outs. I had a couple of tough breaks on outs.”

Boni said he is “a little frustrated” more people from smaller racing jurisdictions didn’t attend the sale. “I think there’s opportunities there for horses that maybe don’t fit (in New Jersey/New York), or don’t fit the ownership here, that would suit others at different racetracks a whole lot better,” Boni said.

Reid said Tattersalls “will continue to work hard and recruit horses for our upcoming summer mixed sale,” despite a decline in horses.

“It’s challenging now and it’s going to continue to be challenging for a few more years because the foal crops have declined,” Reid said. “Several buyers told me today they came to the auction because they just can’t find horses out there. It’s the marketplace.

“Truthfully, that’s where sharp people should take advantage of the marketplace at a public auction and just try to work their skill and become traders. There is no typical owner. Some owners may like overnights and they may like stakes horses. There are certain owners who buy yearlings strictly for stakes racing. If the horses don’t perform at the top level of the stakes performers, those horses are finding homes with the racehorse guys. It’s the cyclical nature of the business. But the overall numbers are concerning just because of the reduction of the foal crops of the last few years.”

The next Tattersalls Mixed Sale will be held on Sunday, July 31 at the Meadowlands during Hambletonian Week. Entries are now being accepted.