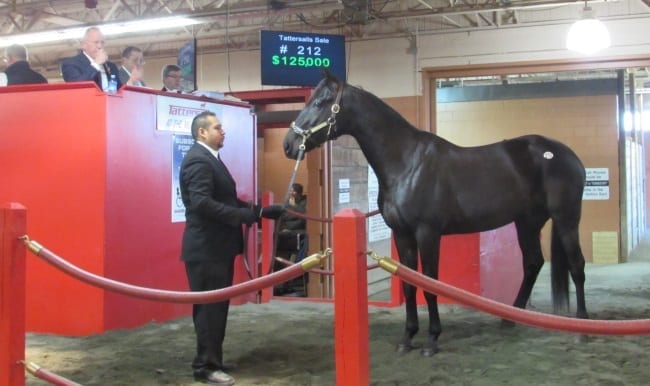 There is something for all at Sunday’s sale in the Meadowlands paddock.

The Tattersalls Spring Mixed Sale set for Sunday (June 5) in the paddock at the Meadowlands Racetrack is shaping up to be “a very workmanlike sale. We have horses that really should fit every jurisdiction,” sale manager David Reid said Thursday.

More than 100 standardbreds — about 80 in the main catalogue minus the outs, plus 22 in the supplement — are expected to go through the ring beginning at noon, sharp.

A training session for the two-year-olds will be held on Saturday (June 4) after the baby races and will be available for viewing on playmeadowlands.com.

“The horses that are racing well are going to get along great,” said Northwood Bloodstock’s Bob Boni who will have a consignment of some 30 horses at the sale. “The ones that are racing well, a mare like Capela, for argument’s sake, number 79, she’s raced well all year. She shows she can win on a half. She shows she can race anywhere. Nine starts, six wins. You’re not going to get much better than that. She’s made $76,000 and she’s qualified and racing. That’s what people are going to want. We’ve got a number of others that are racing. Some are racing and do have some breeding value. Another mare that’s raced really well at Yonkers her last few starts and has a lower record now is Brown Brinny, number 78. So, those two come back to back.”

Reid will have the largest consignment at the sale through his company Preferred Equine Marketing, which will send some 80 horses through the ring. He pointed out a trio of two-year-old prospects and two of them — Cerisier (hip 8) and Chilma (9) — have already baby-raced, with Cerisier winning his baby race on Wednesday at Pocono. Another two-year-old Preferred is selling is a highly-touted Well Said colt out of Beachy Lady named Summer Side (hip 4).

“We have several green three-year-olds that are currently racing and they have a lot of conditions left,” Reid said. “We also have the well-bred filly Better Said (hip 214, Well Said—Ultimate Bet). She just won her last start at Yonkers in :53.2.”

Boni said, “it’s not a tricky formula. The ones that are racing reasonably competitively and look reasonably good, they’re going to perform okay.”

Though, he said he wishes more people racing in smaller jurisdictions took a harder look at the catalogue and committed to coming to the sale.

“I wish some people that race away from the major tracks would do themselves justice to come to these sales because they’re going to find horses that might be undervalued for here, that don’t fit here, but would be very good in other areas,” Boni said.

Horsemen attending the sale, be advised that there is a Hot 97 hip hop concert Sunday evening at 6:30 p.m. at Metlife Stadium near the Meadowlands paddock. Plan accordingly.