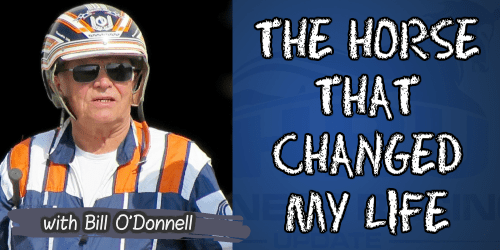 The Horse That Changed My Life: Bill O’Donnell

How close was harness racing to missing out on The Magic Man?

Bill O’Donnell said he was ready to give up on the business entirely at age 24 and head home to Nova Scotia when a special horse not only changed his life, but, conceivably harness racing history, as well.

“I gave the business up — or I was going to — and I was going home and these people came by and asked me to take him,” said O’Donnell, who is considered by many to be the greatest driver to ever sit in a sulky.

The “him” was a horse named Travelin Boy who came along in the early 1970s. At the time, O’Donnell was working in New England as an assistant to Jim Doherty. When Doherty couldn’t take Travelin Boy, O’Donnell jumped at the chance, despite the early prospects being anything but promising.

“He was crippled when I got him and he hadn’t raced for eight or nine months and I spent all my time, all my knowledge and whatever getting him going and he was Horse of the Year two or three years in New England.”

O’Donnell earned nearly $100 million, won virtually all of the sport’s biggest stakes many times over and became the first driver to post a $10 million year. He still holds the record for the fastest mile in harness racing history more than two decades after he drove Cambest to a 1:46.1 time trial.

It all started with Travelin Boy.

“When I went on my own, it was me and (Travelin Boy) and one other horse,” said O’Donnell, who now lives in Guelph, ON and is the president of the Central Ontario Standardbred Association that represents horsepeople that race on the Woodbine Entertainment Group circuit.

Travelin Boy, a son of Adios Boy out of Vermont Dream owned by Iva Gray of North Conway, NH, earned nearly $240,000 and O’Donnell was on his way to the top, rather than out of the sport.
“I had nothing until I got him,” he said.