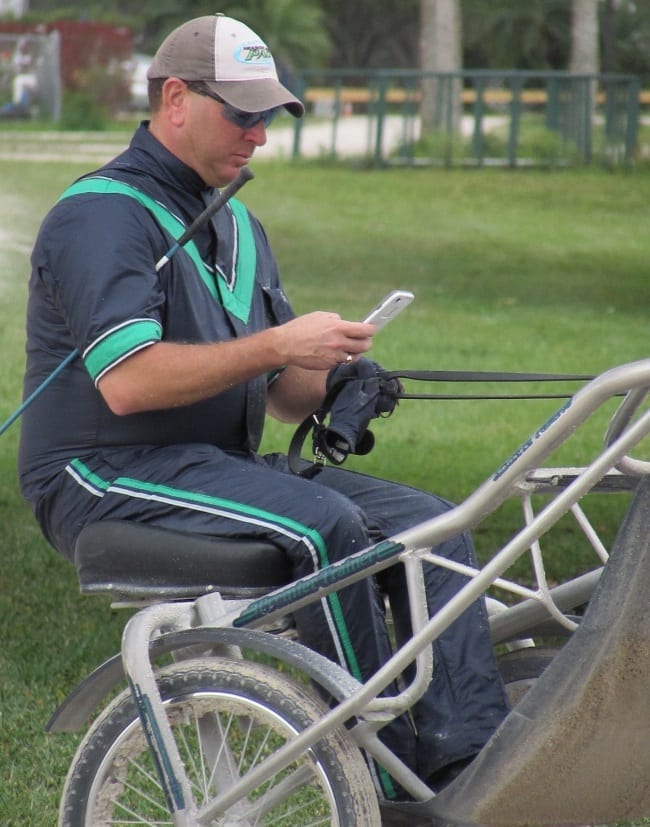 Tony Alagna relishes the work that goes with training “about 100 horses”.

Tony Alagna always wanted to be a trainer on the big stage. He has accomplished that goal and more, but even he couldn’t have anticipated the number of hours he would end up putting in.

“This past Friday (May 20), we trained 48 horses at the farm,” said Alagna when contacted at his Gaitway Farm headquarters Sunday. “Drove up to the Meadowlands Saturday morning to train one, then we qualified seven later that morning. Got some lunch. Then got ready for the first race Saturday. It’s non-stop. I left my apartment at 4:30 Saturday morning and got home at around 11 at night. Then, back up at 6 a.m. I thrive on it. You can’t be upset about what you ask for. It’s what I always wanted to do. I always wanted to train horses at this level, so I got what I wished for. That’s how I look at it.”

Alagna and his staff were incredibly busy Saturday (May 21) night, as eight from the stable raced at the Big M. The 43-year-old trainer talked about how those horses did and what he sees down the road.

WINNING LINC (three-year-old colt, finished third in the first race): “He’s on the improve. Getting better with every start. He’s had a few issues that we are working out. I think he’s a secondary stakes type of horse. He’s not a North America Cup or Meadowlands Pace horse. I’m going to let him let me know when he’s ready for a stakes campaign. He’s eligible to some of the ‘B’-type stuff. Battle of Brandywine, races like that.”

AMERICAN PASSPORT (three-year-old colt, finished last in the third race): “I was disappointed that he made a break as this horse has got so much ability. He just lost his gait about halfway down the lane. We’re going to make a couple of adjustments on him. He showed he’s definitely a player, looked like he was going to win in about 1:49 when he went off stride. We have a couple of weeks until the Somebeachsomewhere and we can get a positive start in him there going into the North America Cup eliminations.”

RACING HILL (three-year-old colt, finished second, missing a nose, in the third race): “A very good horse. He got blocked in and I was very happy with how well he raced in his first start back.”

Any disappointment in losing to Major War, a four-year-old with a modest resume? “No,” said Alagna. “Because Major War has been racing all along. That’s why you don’t race three-year-olds against older horses. It’s still a high school basketball player trying to play against the pros.”

HIGHLANDBEACHYCOVE (three-year-old colt, winner of the fourth race in 1:51): “Very happy with his effort.” When asked if this was his best sophomore pacing colt, Alagna was quick to answer. “No, the other two (American Passport and Racing Hill) are. Highland would be a close second behind those two.”

Several weeks ago, when interviewed by HRU, driver Scott Zeron (who drove both American Passport and Highlandbeachycove) explained how he wanted to drive on the Grand Circuit and how much he enjoyed working for Alagna, and while Zeron is sure to get plenty of work, Alagna uses drivers on a case-by-case basis.

“I use drivers based on what the horse needs,” said Alagna. “The people who own the horse come into play as well, even though a majority of the owners are very open to what decisions we make. It’s based more on the horse, and what he needs. They generally give me that freedom. I try to choose a driver for the horse, not vice versa. I try to make sure that this is a horse that this driver fits, as opposed to, I’m just going to use this person because he’s my top guy. You look at a guy like Jimmy Takter. He’s uses so many different drivers on so many different horses because he tries to match up the two.”

PRETTY BOY HILL (three-year-old colt, finished second in the fourth race): “I thought he raced great. I thought it was one of his better efforts since I’ve raced him. He left, was out a long way, and then grinded to the front. He then got stuck behind a horse and had to be shut down before getting loose again. I think he can be an ‘A’-type player. He showed he was on the fringe of being just good enough last year. He’s improved his game a little bit by being a little more versatile this year.”

TOM HILL (three-year-old colt, finished third in the fourth race, meaning Alagna horses finished 1-2-3): “I probably spend more time with a horse like Tom Hill than a horse like Pretty Boy Hill because we’ve kind of figured out Pretty Boy Hill and we know what his likes and dislikes are. But a horse like Tom Hill, he’s still a work in progress. I try to focus on horses like him who I know have ability. Tim Tetrick was impressed with how far he’s come since he qualified. I feel really good about the progress he’s making and I think he’s going to pop up and win a decent type of stakes race during the course of the season.”

SHOW TIME HILL (three-year-old filly, finished fourth in the fifth race): “I was not happy with the way she raced. I think she’s a much better horse off cover. We tried her on the front end and I just don’t think that’s her style.”

A lot of why Alagna is so busy are the sheer numbers. He doesn’t know exactly how many horses are under his care, only that the number is “about 100”. In the heat of the season, Alagna sees 25 of his horses racing in Canada with the rest competing in the States.

“I don’t ever call it in. I’m at the barn at five in the morning,” said Alagna. “I’m doing the scheduling and everything, and I see every horse on the track every day. My help says to me all the time, ‘We don’t know how you do it.’ When I see a horse on the track and he’s missing a piece of equipment, I’m asking where’s the horses equipment at? I don’t miss details. Details are what make you successful.”

The hours are long. The work is never ending. But Alagna loves what he does.

“It’s full time, but I enjoy it,” said Alagna. “Raced (Saturday) night in Canada and had a great night, and had a good night here (in the States). Got up (Sunday) morning, went to the barn and got to work. Checked horses out that raced last night, talked to owners. I love it. That’s why I chose this profession. I love the animal, first and foremost. I try to do the right thing by the animal and I feel like if I do that, then I’ll do the right thing for the owners.”

Captaintreacherous won the 2013 Meadowlands Pace for Alagna and the trainer is hopeful of taking this year’s edition with either one of his front-line pacing colts, American Passport or Racing Hill. They face a stiff challenge from presumptive Pace favorite Boston Red Rocks.

Any other stakes race you’d like to win, Tony?

“The Hambletonian,” said Alagna. “That’s a race I definitely want to win.”

And he has one that might have the right stuff. “Goin To The Limit (who’s in tonight’s third race),” said Alagna. “He’s a sleeper. He’s got all the talent in the world. He’s got a few issues we have to work out.”

One more thing on Alagna’s already-crowded plate. It probably won’t matter. He’s used to it.