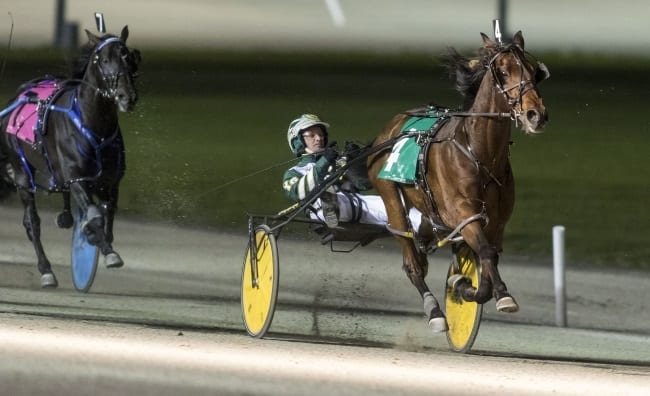 Rockin Ron posted a 1:50.1 Canadian record for older pacers on a half-mile track while winning the $244,000 Confederation Cup Sunday on a chilly night at Flamboro Downs.

On an unseasonably cold night with frost warnings in effect, driver Yannick Gingras was concerned about the front-end holding up Sunday (May 15) at Flamboro Downs for Rockin Ron in the $244,000 Confederation Cup. Trainer Ron Burke said he secretly shared similar concerns, especially since he knew the front was where Rockin Ron had to be if he had a chance to beat U.S. Horse of the Year Wiggle it Jiggleit. Yet, despite some apprehension, Burke — who had three horses in the nine-horse field — told Gingras not to worry.

“He told me, ‘the right horse hasn’t been on the front, yet. Don’t worry about it. Just race him,’” Gingras said. “He sure was right. He pumped this horse up and he went a big mile. At the wire, honestly, he was just starting to get going. If we went around again he was going to win anyway. I never touched him with the whip. I am ultra impressed by him.”

Despite less than ideal conditions, Rockin Ron, the 4-5 second choice, set a 1:50.1 Canadian half-mile track record for older pacers by defeating the 3-5 favorite Wiggle It Jiggleit and Montrell Teague by three-quarters-of-a-length with a gate-to-wire victory out of post four. Rockin Ron sprinted home in :26.3.

“Give credit to the horse that won,” said Wiggle It Jiggleit’s owner George Teague. “That horse went a big mile, 1:50.1 at night and it’s a little chilly. They sprinted home a pretty good quarter. That’s a pretty good sprint on a half at any time.”

Teague said Wiggle It Jiggleit, who started from the trailing nine hole, “was much better than last week” when the pacer came up a bit sick after finishing second at Mohawk to Nickle Bag in the $26,180 preferred.

“I hope when we get a chance to scope him that he’s better than he was the last time. That was my main concern that he healed up in eight, nine days. But he raced really well tonight,” Teague said of Wiggle It Jiggleit.

Rodeo Romeo was two-and-a-half lengths back of the winner in third for trainer Chris Ryder and driver Brett Miller. Rockin In Heaven was fourth for trainer Ian Moore and driver Trevor Henry, while Ryder trainee National Seelster (Sylvain Filion) grabbed the last check.

“Since they made it an aged race, we’re pretty good at it,” said Burke of the race that took a two-year hiatus prior to last year’s edition in the wake of the cancellation of Ontario’s Slots at Racetracks Program.

This year marked the 38th edition of the Confederation Cup and the 10th straight win for Rockin Image going back to November. The son of Real Desire out of Im All A Roan has never lost for Burke, who purchased the Indiana-bred gelded pacer with Weaver Bruscemi LLC and RTC Stables Inc. of Canonsburg, PA from Rockin Ron’s breeders Ron Phillips of Athens, IL and Louis Leinberger of Springfield, IL and their partner Jesse Ferge of Platterville, CO.

“The Indiana horses the last couple of years have done well everywhere,” Burke said. “We’re always looking to buy and at the end of the year the people finally wanted to sell… We almost had him bought at the beginning of the year and, basically, we dropped the ball on it. In the long run, maybe it was better for the horse. He didn’t race as hard as if we would have had him. The people did a good job with him and (trainer Jon Anderson) taught him to be a good racehorse. We just reaped the benefits.

“We raced him once last year, he was super impressive. We turned him out and brought him back and figured we’d have an open horse that we could race. He’s just been way more than we even figured.”

“Yannick really thought he had more left, so that’s just another step in the right direction and now we start trying to figure out where we go from here,” Burke said, indicating the Graduate at the Meadowlands was next on the agenda.

Meanwhile, Teague said that if Wiggle It Jiggleit scopes well, he’s thinking of dropping the gelded son of Mr Wiggles—Mozzi Hanover into the $200,000 Battle of Lake Erie Saturday (May 21) at Northfield Park versus Freaky Feet Pete.

“I hope in mid-season he’s still pounding away like he started out the season,” Teague said of Wiggle It Jiggleit, who has lost back-to-back starts, but still sports a 4-3-0 record in seven starts good for seasonal earnings of some $200,000. 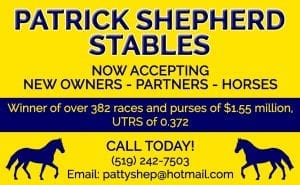