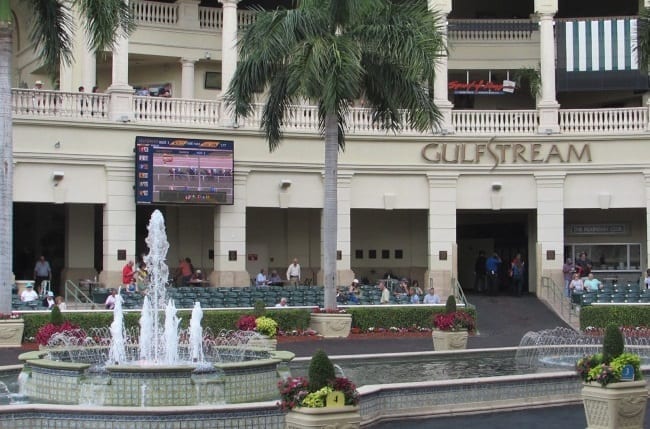 The Richest Horse Race in the World

Frank Stronach says the $12 million Pegasus World Cup for thoroughbreds — expected to debut next January at his company’s Gulfstream Park — will offer a unique twist on stakes.

Never shy about introducing new ideas for horse racing, Frank Stronach, whose company owns and operates Gulfstream Park and five other thoroughbred tracks around the country, announced on Wednesday (May 11) the creation of the $12 million Pegasus World Cup scheduled for next Jan. 28 at Gulfstream.

Besides becoming the world’s richest horse race, the Pegasus Cup will offer a new business model for all of horse racing to consider. The race will be restricted to 12 horses whose owners will be required to pony up $1 million for a starter spot. In exchange, besides the purse money and the right to participate in future Pegasus World Cups, the owners will share equally in 100 per cent of the net income from pari-mutuel handle, media rights and sponsorships for the race. Additionally, owners can race, lease, contract or share a starter or sell their starting berth.

The Pegasus World Cup gained immediate credibility with the announcement that Jack Wolf, the founder and co-managing partner of Starlight Racing, will be the CEO of the Pegasus World Cup, and that Tom Ludt, a board member of the Breeders’ Cup, will assist with the marketing and coordination of the race.

By choosing Jan. 28 for the race date, Stronach conspicuously avoided a conflict with the Breeders’ Cup in the fall and the Dubai World Cup in the spring.

Stronach, now 82, has never been bashful about promoting his concept of racing, that a track should be part of a destination, not the lone attraction. That is why he built a village full of stores and restaurants around Gulfstream Park and erected the magnificent 110-foot $30 million statue of Pegasus slaying a dragon in Gulfstream Park’s north parking lot.

“It’s iconic,” Gulfstream Park president and chief operating officer Tim Ritvo, a former trainer, said. “It’s a brand. It’s a legacy that Frank says, ‘This is horse racing. This is the horse.’ At first, everybody thought, ‘What are they doing?’ Now, people stop and take pictures. It’s just a monumental thing not a lot of people would have done. Mr. Stronach is a long-term thinker and he thinks this is our brand.”

It’s a brand that continues to resonate within the thoroughbred racing industry. Gulfstream Park has been the home of the Eclipse Awards the last few years, has been the annual convention site of the Permanent Disabled Jockeys Fund and the this winter played host to the Thoroughbred Owner Conference.

Now Stronach is challenging the racing establishment with a new way to showcase racing and a striking new business model to fund it. Can it work? And, if it works, can it work for other racetracks? Could it work in harness racing?

In an interview with Tom LaMarra of Blood-Horse, Bob Elliston, the chief operating officer of the Breeders’ Cup, said, “It’s the first I’ve heard of it, but Frank Stronach has put a lot of money into the business. You’d be hard-pressed to find anyone who has put that cumulative amount of capital into the business. I’m excited he continues to put his ideas forward. The devil is in the details, but I’d love to hear about new capital and ways to get eyes on the sport.”

In a welcome message on the first day of the Thoroughbred Owner Conference at Gulfstream Park, Jan. 12, Stronach introduced the concept of a Pegasus World Championship. “The basic idea is, how can racing compete with other great sports?” Stronach said. “We’ve got to make things exciting, things the press will write about. We want to tell people that love horse racing, ‘Look, we want to establish a new business.’ We would lease Gulfstream for one day and call it a new business.”

If the Pegasus World Cup debuts as planned under the watchful eye of Pegasus, it will signal the birth of a new way to conduct business in horse racing as well as a significant new way of attracting horses, fans and media to a sport in desperate need of building on the national attention generated by American Pharoah’s Triple Crown last year.