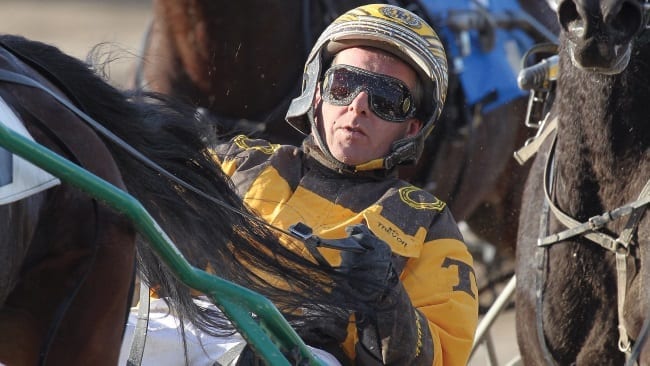 Veteran Trevor Henry has gone from being the long-time king of Ontario’s B-Tracks to the leading driver on the big-city Woodbine Entertainment Group (WEG) circuit.

With four-and-a-half months of the 2016 season in the books, 45-year-old Trevor Henry currently leads the Woodbine Entertainment Group (WEG) driver colony with 104 wins and earnings of $1,588,450. Heading into just his second full season on the WEG circuit, the Arthur, ON resident can be found in almost every race and is often a go-to selection for handicappers.

“I drive for a lot of different (trainers),” Henry said. “I get drives in pretty near every race, so it’s good. It keeps me out of trouble.”

After dominating the ‘B’ track circuit for a decade, Henry made the switch to Mohawk/Woodbine in November of 2014 in hopes of scaling back his workload. Racing at Clinton, Hanover, Grand River, Georgian Downs and The Raceway at Western Fair Raceway, Henry led all Canadian drivers in total wins in 2012, 2013 and 2014, but criss-crossing the province was taking a toll on more than just his truck’s odometer.

“I actually wanted to slow down a bit. Instead of going six, seven days a week, I just wanted to go like four days,” Henry said. “I was going too much and I was just getting tired of racing every night.”

The reinsman found quick success on the WEG circuit. Trainers such as Richard Moreau and Anthony Montini, who had used Henry’s services on the ‘B’ tracks, gave the driver quality mounts and he was quickly appearing in the majority of races on each card.

In 2015, Henry cemented his position in the WEG driver colony, picking up more clients and earning the regular drive on stakes colts such as Dr. Ian Moore’s Rockin In Heaven, who captured a division of the Somebeachsomewhere and took Henry to the Little Brown Jug for the first time. Rockin In Heaven will start from post seven tonight (May 15) in the $244,000 Confederation Cup final at Flamboro Downs and has been pegged at 7/1 in the morning line odds for the field of nine.

“Trevor is a great driver regardless of track size,” said Ken Middleton, Jr., who has watched Henry work from the announcer’s booths at Elmira Raceway, Flamboro Downs and now Mohawk and Woodbine. “He can make speed with the best of them, but he can also finesse one that needs a bit of help. He can often hop on a horse for the first time and wake them up immediately. A good example is Nickle Bag — one of the most dominant preferred pacers on the WEG circuit.”

Henry said Nickle Bag and preferred class pacing mare Waasmula have been key contributors to his success this season, but the reinsman has also found the winner’s circle with young horses trained by his wife Shannon Henry. Sophomore trotting filly Wanaka won the Celias Counsel Final on April 28 and three-year-old trotting colt United BI scored a 1:55.4 overnight win on May 12 at Mohawk.

“I’ve only got four, but four decent ones,” said Henry, who still spends his free mornings in the barn. “I have one two-year-old trotting filly; she’s going pretty good too. I like her, so hopefully she makes it.”

While keeping his focus firmly on the WEG circuit from November through May, Henry continues to travel for Ontario Sires Stakes (OSS) engagements during the summer months. A two-time winner of the Lampman Cup as the leading driver on the OSS circuit — in 1996, driving almost exclusively for his father Ross Henry, and in 2007 for an expanded client roster — Henry came within 21 points of a third title in 2015.

While those career highlights in 1996, 2007 and 2013 may have seemed like more natural points at which to make the switch to the WEG circuit, Henry says the idea never crossed his mind until 2014.

“I never really even thought about it,” said the father of two teenagers. “I was happy where I was at, anyways. I was making a good living doing that, so I had no reason to.”

Now with 19 months under his belt on the WEG circuit, Henry says the reduced schedule may be one of the factors that have contributed to his success.

“I think it’s helped me, because I’m more rested and I’m not as tired as I used to be. This is like a holiday really, it’s not that hard. I get three days off a week. It’s really nice.”

The less frenetic pace may also be one of the factors that has kept Henry out of the judges’ office in recent years. One of the criticisms leveled at him earlier in his career was that he could be too aggressive. In 2008, he sat on the sidelines for two months, and in 2009 he was suspended for four months for using his whip in an excessive manner. Later that year, the Ontario Racing Commission implemented new urging rules for all drivers, and in the years that followed Henry has achieved success with a more refined style.

“I’m not nearly as aggressive as I used to be. I’ve relaxed a lot I think,” said Henry, noting a combination of experience and quality of mounts have also played a role in his current driving style.

“Either that or (the judges) learned to tolerate me, I don’t know,” Henry added, chuckling.

Looking ahead Henry is making no predictions about potential successes, but he has clearly found the perfect gear after spending his first two decades in the industry on overdrive.