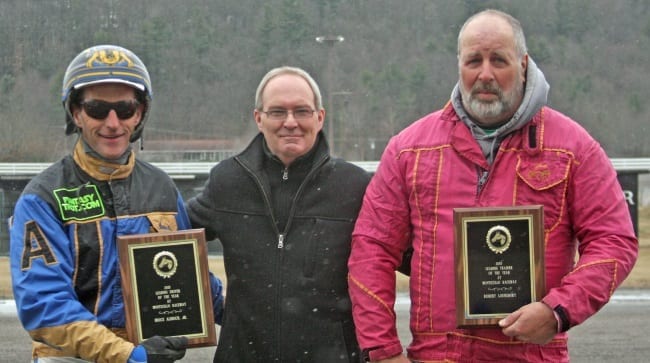 Doing It His Way

Trainer Bob Lounsbury has blazed his own path to the winner’s circle.

Robert Lounsbury is a harness horse trainer, a land surveyor and an ex-marine. He’s been the leading conditioner at Monticello Raceway for several years now. And he’s done it by doing things his way.

Lounsbury is a pleasant guy who does not come across as too impressed with himself. He’s been training horses for three decades, and like a lot of people who are exceedingly good at what they do, his ideas and the way he does things are not exactly by the book.

“Bruce (Aldrich Jr., his main driver) has heard it, they’ve all heard it,” said Lounsbury. “It’s a two-minute race. You got two minutes to be on the front. Don’t take your time, let’s start right now. So you’re either leaving the gate and heading to the front, or, as soon as they settle, I want you heading for the front. I don’t want you second over. I want you first over, coming.”

Okay, so you primarily train horses who race on a half-mile track, it’s no shock you want the lead, but what about training techniques?

“We have a bit of a different take,” said Lounsbury. “First thing we do, we don’t use any coolers or blankets in our barn. Ninety per cent of the big-time trainers, you walk in their barns and every horse is blanketed up. They warm a horse up, you’ll see coolers on them. Some guys will use three coolers. That’s harness racing. Everybody says you have to do that. Nobody’s actually ever told me why.

“The only thing I see is, especially in the wintertime, when you pull a blanket or a cooler off a horse, he gets a draft right away. And if you throw a cooler on a horse after he’s warmed up, well, he sweats underneath it and you pull the cooler off and he gets a chill. And all I ever found is that you make horses sick doing that. So, we don’t allow it. I think Mother Nature does her own job of cooling and heating horses. If a horse is cold, he grows more hair. If he’s hot, he sheds some hair. That’s nature. And we find that to work much better. We haven’t had a sick horse in our barn ever since we threw the coolers and blankets away.”

The statistics back up his not-the-norm way to do things.

The 2015 season saw Lounsbury win the Monticello training title with 183 winners, 56 more than his nearest competitor. The year before saw more of the same as Lounsbury trainees won 158 races to top the Monti standings. It comes as no surprise that Aldrich wore the driver dash crown both seasons as well.

The Lounsbury stable is on a six-year statistical run that would make any horseman envious. Over the span that stretches from 2011 to now, his overall numbers, according to the United States Trotting Association, stand at 756 races won from 2,308 starts, for an incredible win percentage of 32.8. If a trainer is doing well, he’s winning 15 per cent. Lounsbury is doing quite a bit better. But not because he’s does what everyone else is doing.

“I train very little,” said Lounsbury. “Once everybody’s at the races, I don’t think any horse really needs to be trained if they’re racing every week. I think that’s a mistake for the most part. Especially with old, lame horses. I put a stopwatch on everybody when I’m on the track. I have for years. So I know what every trainer is doing, how they train. I want to know, not just what the good guys are doing, I want to know why some guys are so bad all the time. It puzzles me.”

Maybe the key to Lounsbury’s success is harness racing for him is a side gig. Whereas a lot of trainers depend on keeping owners happy, and Lounsbury’s winning ways accomplish that well, he isn’t afraid to lose an owner here and there, if that’s the way it has to be.

“I’ve been training horses for 30 years,” said Lounsbury. “Back in 1968, a friend was sweeping up the grandstand at Monticello and that’s when I made my first bet. I’ve been hanging around the track ever since. But being a trainer is not my living. I’m been a land surveyor for more than 40 years. Harness racing needs to be fun for me. It isn’t where I make my money. But we’re at it seven days a week. I jog 15 horses a day every day. I don’t care what the weather is. I have the best grooms on the grounds and I have the best driver on the grounds (Aldrich Jr.).

Always up for a challenge, Lounsbury dipped his toe in the water at the current meeting at the Meadowlands, and, not surprisingly, tasted some success.

Good Citations, Camwiser and the recently claimed duo of Camwiser and Royal Engagement all won for Lounsbury at the Big M during the month of April. But Bob, those are Monticello horses, aren’t they too cheap to race at the Big M?

“The claiming races at the Meadowlands, the classes are inflated,” said Lounsbury. “Royal Engagement. She’s a $5,000 claimer. At the Meadowlands she’s a 10 (she’s in tonight’s 10th race at the Big M, making her second start for new trainer Richard Johnson). She was beating my five claimers. So I claimed her and moved her from Monticello to the Meadowlands. The racing secretary at Monticello did not like that too much. Good Citations. If they drew another $7,500, this horse would be there, but I have Camwiser in there. (Lounsbury then paused as Good Citations was sold during this interview; he found out via text). I just sold (Good Citations) over the phone. We got $7,500 for him. Good thing, because if I raced that horse again, it would have been in six claimers at Tioga, so I get $7,500 for him. The owner makes $1,500 more. What’s good for my owners is good for me.”

Lounsbury had every intention of keeping Camwiser at the Big M but the 11-year-old was also claimed away, for $7,500, on May 7.

Harness racing may not be where he makes his money. But it remains the object of the game, nonetheless. That’s the bottom line for the keen-eyed surveyor of horse talent. And pieces of property.

“I raced five $4,000 claimers at Monticello last year,” said Lounsbury. “And they all earned $40,000. It’s about making money. Do you pay your bills? Do you have something left at the end of the week? When my owners do their taxes at the end of the year, they are in the plus.”