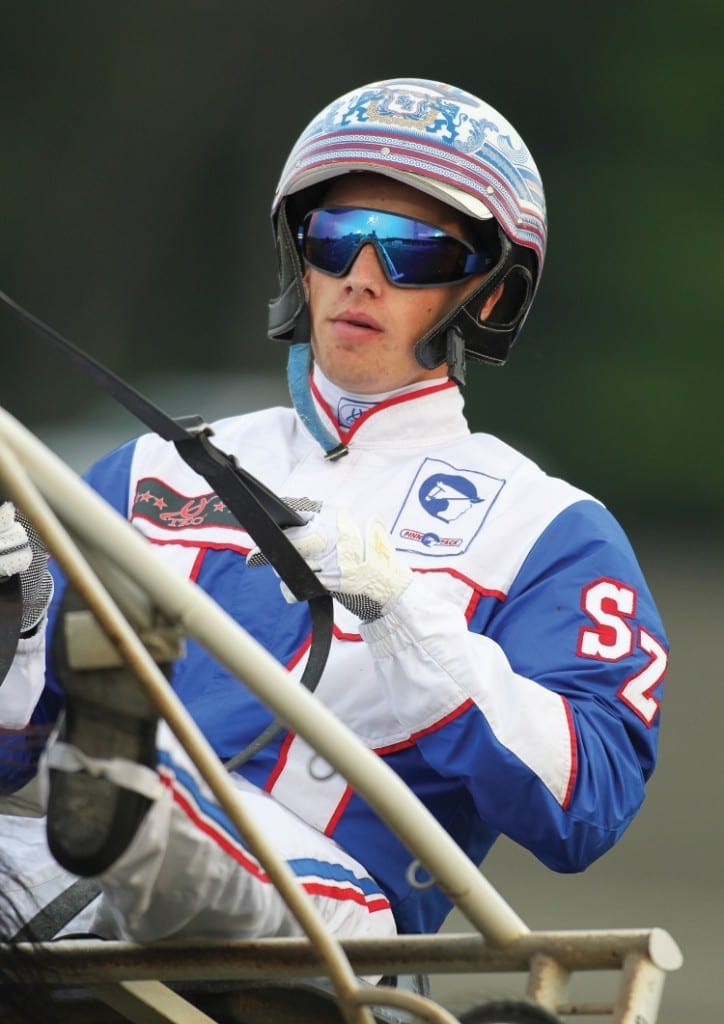 Much accomplished, more to come

Scott Zeron has packed an awful lot into his 26 years. And if you ask him, there’s still plenty left to do.

New York/New Jersey racing fans may only know Zeron from the last three years as a regular driver at both Yonkers and the Meadowlands, but a look at the back of his baseball card might make one wonder why he left his native Ontario.

For two years in a row (2010-11), Zeron led all Canadian drivers in wins, tallying 1,145 winner’s circle visits over that span while driving at some of the smaller Ontario tracks. A year later, he was named the sport’s Rising Star Award winner before becoming the leading driver on the Woodbine Entertainment Group (WEG) circuit in 2013.

Zeron’s hunger for more success is what brought him to the United States.

Zeron currently sits atop the driver standings at the Meadowlands with 60 wins. And has no intention of giving up his lead on the field. “No, I’m not really surprised,” said Zeron of his Big M success. “It’s been really good. It’s my third meeting at the Meadowlands and it gets better each and every year. Obviously, (my success) might be inflated a little bit when you consider all of the guys (Tim Tetrick, Yannick Gingras, etc.) are over at the Levy (at Yonkers on Saturday nights), but things are picking up, I’m driving for good people.”

Zeron drives at both the Meadowlands and Yonkers consistently. He’s at the Big M on Friday and Saturday nights. He’s at Yonkers on Monday, Tuesday and Thursday. He is one of the few who can speak to the differences in racing between the two tracks.

“At the Meadowlands, there are a lot of surprises leaving the gate,” said Zeron. “You can’t really anticipate too much of how some people are going to drive. At Yonkers, I want to say you look at the program and you know how things are going to unfold, so not too many surprises at Yonkers. At the Meadowlands, you have to be ready for the audibles.”

Zeron had some interesting thoughts as to how he views the drivers – and how he goes about his craft – at the two tracks. For the time being, with the Levy and Matchmaker Blue Chip Series sitting atop the marquee every weekend, the driver colony at Yonkers is clearly tops in the game.

“Any time you drive against the top guys (at Yonkers), I feel like some people have predictability. I feel like there’s always an overwhelming favorite,” said Zeron. “And where there is something like that on a half-mile track, that kind of horse gets a lot of respect and people line up to a horse like that. At the Meadowlands, that horse might have to make two or three moves to get to the front by the half.

“It’s easier to drive against the best drivers, because when they move first up, they advance. They go forward. They know how to get speed out of a horse. When some guys that are coming from other tracks drive, they get anxious. They make quick moves. They are maybe not as patient.”

The purse structure at Yonkers is stronger than the one at the Meadowlands. Casino gaming revenues have seen to that. But does racing for a higher purse mean as much to others who follow the game?

“Purses don’t make better racing. The Meadowlands, it is so iconic, it would take a lot of years for the racing to be polluted there to say that it’s not glorious to win a race there. It’s really tough to win there, even though the Meadowlands hasn’t been going with great racing. There are $7,500 claimers. They’re doing what they can to fill the box. They have non-winners of $3,500 in their last five starts. But it’s tough — $7,500 claimers can go 1:51. Those kinds of things are unheard of.”

Zeron takes a practical approach to where he races, and knows where one races and why is a personal decision.

Zeron has the pedigree to be a great harness driver. His father, Rick, was the dominant driving force at Hippodrome Blue Bonnets in the 1980s before becoming a perennial presence on the leading drivers and trainers lists on the WEG circuit for the last two decades. He also had some good fatherly advice when Scott wanted to leave the smaller tracks for Woodbine and Mohawk.

“My dad told me, ‘Make sure you are ready to do it.’ I think I waited until I was 22 before I went to WEG,” said Zeron. “I only started watching racing when I was 12 years old. I loved watching my dad win, but I didn’t train my first horse until I was 16. My family never pushed me to go into the business. They pushed me to go to college, just in case. I was prepared for anything. I went to college for accounting. That was the fallback.”

Racing at Yonkers? All good. The Meadowlands? All good. Zeron’s doing well at those venues. But Grand Circuit success is what he craves. And he’s tasted some success already.

In 2012, he won a race that every horseman dreams of winning.

“It was a thrill to win the Little Brown Jug,” said Zeron of the stake he won with Michaels Power, becoming the youngest driver ever, at 21, to win it. “It wasn’t like I tried 20 times and finally won it. It was the first time I drove in it, so I was ignorant to the significance of it, which was probably the best thing for me.”

With the casino issue to be decided in November, Zeron, fueled by his accounting expertise, thinks that even if the voters say ‘yes’ to casino gaming in Northern New Jersey, it’s no slam dunk for racing’s life line. “Kudos to Joe Faraldo on getting his horsemen 10 per cent in New York,” said Zeron. “That’s a huge deal. Getting contracts with a duration of 10 years. Those are huge numbers for horsemen. The way it looks like it’s written now in New Jersey, a casino means two per cent for horsemen. Does that change the game? Absolutely not. We have to advocate for a higher percentage. I highly doubt we can get up to 10 per cent, but if we can get anywhere near eight per cent, that would be the difference. That would bring the Meadowlands back to $50,000 purses for the open class. Sustainability and a high percentage. That’s the positive outlook. No casino? I don’t even want to talk about no casino.”

Zeron likes where he’s at. And knows where he wants to go. “I want to be that Grand Circuit driver,” said Zeron. “People ask me, ‘Why don’t you drive at Yonkers full time?’ And I say, ‘Because it takes you away from being a Grand Circuit driver.’ Not to take anything away from Yonkers, but I like changing things. If I were to race at the same track five days a week, it would almost feel like a desk job. But to race different tracks every day and to get a new batch of two-year-olds in every year and to develop horses, it feels like you accomplish something. That is what makes it a great game for me. It’s when somebody puts their horse in a million-dollar race and says, ‘I want Scott Zeron to drive my horse.’”