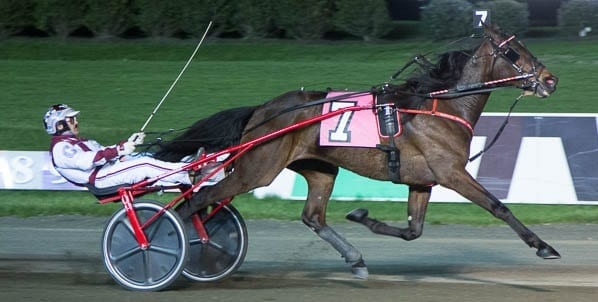 The older trotter won his third race in 2016 in as many starts on a night his driver, John Campbell, won four races at the Meadowlands.

A five-year-old gelded son of Crazed—Topcat Hall, JL Cruze used a change in tactic from his first two victories of the season and was hustled to the top by driver John Campbell before hitting the quarter in :27.1.

Campbell was allowed to rate the Eric Ell trainee through a half in :56.4 and three-quarters in 1:25.3, leaving plenty of gas in the tank. At the top of the stretch, Rose Run Parker was a non-threatening presence alongside the eventual winner, but did provide live cover for Shake It Cerry, the lifetime earner of $2.4 million who was making her 2016 debut. Shake It Cerry closed well in a solid try for the Jimmy Takter barn.

Campbell, the all-time leader in wins and earnings at the Big M, scored four times on the card. In addition to JL Cruze in the sixth race, Campbell won with Massive Clout ($6.80 to win) in the first, Kiss Me Onthebeach ($8.60) in the third and longshot I C Caviar ($33.00) in the eighth.