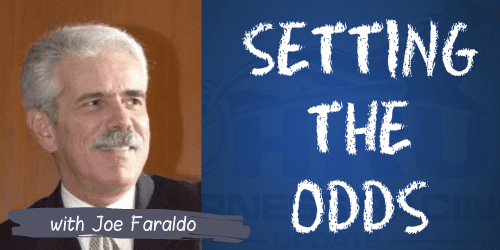 Setting The Odds with Joe Faraldo

This week, the president of the Standardbred Owners Association of New York predicts the future of the sport.

Handicap the chances the following will occur:

Betting on the sport in the state of New York will increase in each of the next three years
— JF: 5-1 “because of increased competition from sports gaming contests.”

You and Jeff Gural will join forces and pool resources on a major industry-wide marketing initiative in the next three years
— JF: 100-1 “Jeff said that we don’t share the same vision for the sport.”

You and Jeff Gural will join forces on any industry project in the next three years
— JF: 5-1 “It depends if the definition of an ‘industry project’ is solely track specific or is really an industry initiative that has measurable value to the game.”

Co-mingled betting pools with Europe will be a more regular occurrence at Yonkers in the next three years
— JF: Even money. “Hopefully starting in May 2016 unless we hit a bump in the road.”

In the next three years, harness tracks in New York, Pennsylvania, New Jersey and Delaware will work together to coordinate schedules to address declining horse numbers and help fill races in all jurisdictions
— JF: 30-1 “as that would involve too much of a constriction of racing opportunities (dates) that would have a long-term greater negative economic impact on the owners in the sport. It would also require track owners to give up advantages they now enjoy after years of being ignored, made to feel insignificant as the step children of those who used to enjoy those privileges… Everyone at times is short of horses but we all make do.”

A number of big-name trainers will be handed major fines and suspensions this year over the alleged Glaucine positives in New York
— JF: 3-1 “Unfortunately, the trainer’s responsibility rule which I argued against in the Federal Court system up to the U.S. Supreme Court while construing the rule as a rebuttal presumption also has a catch all that a trainer in these cases has a ‘duty to guard and protect the horse from the administration’ of any foreign substances. Some defined specifically and some generically whose administration within certain time periods is prohibited with outer limits of seven days. Many of these trainers are well known and respected, one I have personally used in the past. I’m sorry to say they will face the same fate as others. The process is the same for all of us. I have dealt with this NY lab and its predecessor in the past and it is difficult to fight the pharmacologist who has been at this for years. This does not for a moment mean that this Class ll drug has been intentionally administered by anyone, but it raises the question of a per se violation of the trainer’s responsibility rule. I don’t think these very respected trainers are any different than most other trainers who are, and have all, participated under the same responsibility rule. These rules of conduct are followed by the regulators as that is their own mandate in order to protect every participant and those bettors we still have in the game. Fortunately for the game there are a very high number of samples tested in the U.S. with a very low incidence of reported positives as per the ARCI.”

More trainers than those announced this week will test positive this year for allegedly high levels of Cobalt and be handed major fines and suspensions by the state of New York
— JF: 4-1 “Cobalt is problematic from a diagnostic point of view and its pharmacological effect is still subject to debate as is it excretion time from a horse’s system.”

In the next 10 years, Yonkers will expand the size of its half-mile track to a five-eighths or larger
— JF: 1,000-1 “When the VLTs first came to YR, the horsemen offered to pay for a conversion to a 5/8ths. The ‘no way’ response was accompanied by the statement that our horsemen would race over a postage stamp for the money we would eventually race for.” (Setting The Odds Longshot)

The USTA will make a substantial reduction in its number of directors in the next five years
— JF: 15-1 “It has been studied in the past and the only change that has occurred is due to the unfortunate downsizing of racing venues.”

The USTA will still be funding social media beyond 2017
— JF: 3-1 “With some increased oversight or with some other vendor, but it will go forward. Continued monitoring and oversight is necessary. Just throwing more money at a problem is not solving it.”

The SOA of New York will supply additional funding to the USTA’s social media campaign in the next three years
— JF: 30-1 “The SOA of NY does our own work where we can realize results. If efforts are track specific, or do not show benefit industry wide, the SOA will not commit funds.”

The USTA will still be supporting the cost of getting major harness racing events televised beyond 2017
— JF: 3-1 “TV according to many is not beneficial in this technology age but I believe in limited support of the TV effort. A few years ago, when the USTA leaders were subject to unfair criticism for their decision to study the specific TV issue before committing funding in excess of what is done now, that was unfortunate even for the advocates of the then inflated plan. Undermining dedicated leadership with uninformed but well meaning membership outrage leads to reactionary decision making without thoughtful consideration.”

You will become president of the USTA in the next 10 years
— JF: 10-1 “If I was to be a candidate and was elected I would bust my butt. I am devoted to the game and beholden to no one. As SOA president I am very used to serving for years without pay and while that is the same as the USTA, in my case, that may be that it is a measure of real value.”

In the next five years, New York will allow shipped semen
— JF: 30-1 “NYS sees an economic benefit to its agriculture industry by maintaining this prohibition for its eligibility to its Sire Stakes program and resident mares incentive. While NY dedicates 10 per cent from VLTs to racing and breeding they can and will continue with this.”

The New York Sires Stakes program will still have the highest total purses in the sport five years from now
— JF: 5-1 “Competition and reorganization of formula distribution of available funds by other jurisdictions which become healthy with racino/casinos can become more aggressive and have the power to be more competitive. NYS may not be the leader, but we will be a real player for sure.”

Horse racing will still — for the most part — have the support of politicians in New York five years from now
— JF: 3-1 “There are thousands upon thousands of jobs in the most labor intensive industry in NYS. Its agriculture, farming and breeding components are far too important to the economic engine in NYS.”

Citizens of New Jersey will pass the 2016 constitutional amendment to allow casinos in the north of the state
— JF: 4-1 “Over the past decades, only two referenda on NJ have been defeated. The only thing that may make a difference is the war between viewed economic views of the north and the south. I am interested in the participation that racing will supposedly share if this should pass.”

A casino will open at the Meadowlands by 2019
— JF: 8-1 “There are many suitors for a slice of that pie and The Meadowlands choice of Hard Rock as a partner in an effort to gain some inside track has backfired.”

A major casino will open in Manhattan in the next five years
— JF: 100-1 “Heard all those discussions sometime before. We’ll have to wait for pigs to fly.”

Takeout on wagering at tracks in New York will be lowered on most bets from the current level
— JF: 100-1 “Lowering takeout needs much higher wagering to compensate for lost revenue. Also, tracks are more inclined to take signal at higher rates as they make more money on those imported signal. Sounds good plays out bad. Double whammy.”

You will own a major stakes winning-horse in the next five years
— JF: 25-1 “Maybe Schnittker or someone like him can save me there. Otherwise, I rely on the horsemen’s wisdom ‘even a blind squirrel can find an acorn.’ Maybe.”