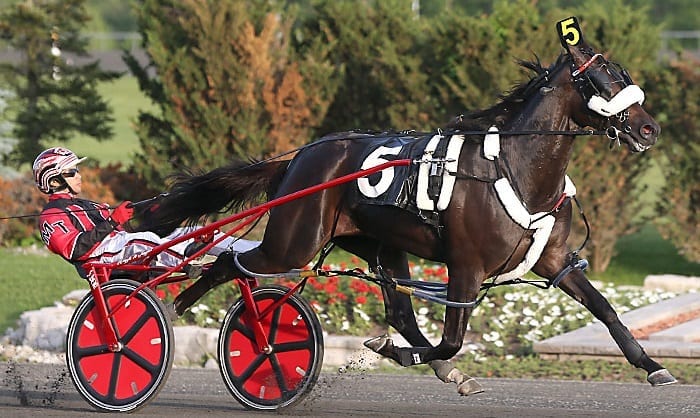 Wiggle It Jiggleit epic in defeat

The reigning Horse of the Year came from dead last in his Levy  test to finish just one length back of winner All Bets Off.

Horse of the Year Wiggle It Jiggleit was epic in defeat Saturday night at Yonkers Raceway, coming from way, way off the pace to finish second in his debut in the George Morton Levy Series.

“He was huge. He was definitely huge. You don’t see too many horses on this track do what he did tonight and even struggle to finish second,” Wiggle It Jiggleit’s owner, George Teague, Jr., said minutes after All Bets Off won by one length in 1:51.3.

“It was a huge mile. We knew the seven hole was going to be an issue when he drew it.”

Sent off as the overwhelming favorite in a race where show betting was banned, Wiggle It Jiggleit and his regular driver Montrell Teague did not fire out of the outside post and sat last through the half. The pair was then forced to go three wide to get around some dead flow. At the top of the stretch, the tandem sat sixth in the seven-horse field, six lengths back. Thanks to a :27.3 final quarter, Wiggle It Jiggleit rocketed home and edged Forty Five Red by a nose hair.

“I couldn’t be happier with (Wiggle It Jiggleit). He paced the back half huge,” George said. “Tonight, he just didn’t get a trip.”

Despite it being his Levy debut, the series was in the third of five preliminary weeks. George said he wasn’t concerned about the fact a second-place finish will make it more difficult for Wiggle It Jiggleit to make the April 23 $200,000 Levy final.

“Where else am I going to race?… They aren’t going to write opens for me all over the place. You take what you can get and if I don’t make it to the final, I’m all right with that. If I make it to the consolation, I’m all right with that. If I don’t make it to either one, I’m all right with that. I’m not that hard to please,” George said. “This guy doesn’t owe me anything. I won’t pressure him into things he’s not capable of doing… I’m trying to manage him until November, not manage him through April. I’m not saying these races aren’t important, but I want to hit the pavement for a good six, seven, eight months. I don’t want to just hit it now and be done. Montrell will take care of him the best he can and we’ll just take what comes to us on this half-mile racetrack that’s notorious for post position.”

The four-year-old gelded son of Mr Wiggles—Mozzi Hanover, trained by Clyde Francis, is now 1-1-0 in two starts this year, good for $42,500 of a career total of more than $2.23 million.