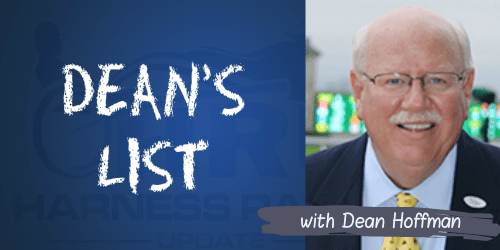 That’s the inescapable conclusion after looking at a list of leading trotting sires around the world as all the leading sires trace back to the Michigan-born Peter The Great, a foal of 1895.

The top sires from three continents descend from three grandsons of Peter The Great foaled in the 1920s. They are:

• Sam Williams (1922), who was exported to France after racing in the USA and established himself as an influential sire.

• Scotland (1925), a top colt and older trotter in the late 1920s who later achieved fame as a stallion at Walnut Hall Farm.

• Volomite (1926), although he played second fiddle to his stablemate Walter Dear (a half-brother to Sam Williams) in the colt stakes of 1928-29 and enjoyed a resplendent stud career at Walnut Hall Farm.

The stats on stallions around the world were compiled by Nikolaus Matzka, an Austrian pedigree buff who operates the www.breedingtrotters.com website. Let’s take a look at his compilation:

Since France has the strongest harness racing program in the world, that’s a good place to start our international survey. France has long been justifiably proud of its breed of trotteur Francais and for decades after World War II eschewed the use of outside bloodlines.

Two American expatriates, Sam Williams and The Great McKinney (both foals of 1922) had extraordinary influence before the French basically slammed the door on outside blood. That door was opened briefly in the 1980s and the prophet who crept in was Jean-Pierre Dubois. He saw value in American bloodlines when no other French breeders did and his prescience has resulted in an extraordinary impact on French pedigrees. Many of the top stallions have “Made by J-P Dubois” tattooed on them.

The leading French stallion in 2015 was Love You, and his dominance spreads to other countries by virtue of his semen being shipped widely. Now 17, Love You is usually at the top or near the top of the French trotting stallions. His male line goes back to Sam Williams and if you look elsewhere in his pedigree you find such American stallions as Speedy Somolli, Super Bowl, Speedy Count, and Victory Song.

Second on the French sires list is Ganymede, who topped the list in 2014. He is a grandson of Royal Prestige (Speedy Crown).

Moving up to third place is the 13-year-old Prodigous, a son of Goetmals Wood, who is basically the product of blending the male lines of Victory Song and Nevele Pride. Prodigious is out of a granddaughter of Royal Prestige.

Fourth on the French list and rising quickly is Ready Cash, the 11-year-old rising star who is line-bred to Star’s Pride through Nevele Pride and the Franco-American star Florestan.

Trotting is enormously important in Sweden, as anyone lucky enough to travel there knows.

By virtue of shipped semen, Love You was the leading stallion there in 2015 as he was in 2014.

Ranking second to the champ was the Swedish native son From Above, a son of Zoot Suit by Nevele Pride. Zoot Suit won a heat in the 1976 Hambletonian and is the son of pacing (yes, pacing!) queen Glad Rags by Greentree Adios.

Coming just after them were two sons of Pine Chip — the 2001 Hambletonian winner Scarlet Knight and the exported Dream Vacation.

In 2015, it was a case of “Round up the usual suspects” among trotting stallions as the top three were Donato Hanover, Kadabra, and Cantab Hall. That same trio of stallions had ranked 1-2-3, but in reverse order in 2014.

The upstart who is trying to muscle them out of the way is Muscle Hill, now 10, who is clearly a hot property. Andover Hall, always among the leaders in North America, rounded out the top five.

The trotting sport has endured some difficult years in southern Europe, but the King remains on the throne.
Varenne, surely one of the greatest international stars of recent decades, once again swamped his rivals among Italian stallions.

Varenne is a grandson of Speedy Somolli and picks up an additional Speedy Crown blood through his second dam Baree (dam: Spree Hanover by Star’s Pride).

Ganymede and Love You, both based in France, ranked second and third to Varenne last year, as they had in 2014.

Toss Out, the Supergill son that raced against American Winner and Pine Chip in the ‘93 Hambletonian, ranked fourth again in 2015 while Pine Chip himself was fifth in the 2015 Italian sires list.

At the top of Europe, we find the French stallion Coktail Jet (out of a Super Bowl mare) as the leading stallion in 2015 with his son Look de Star second.

The American export SJ’s Photo, a huge star in Scandinavia as a result of his races there two decades ago, ranked third last year.

Dream Vacation and Kadabra, who had been 1-2 in the Norwegian rankings in 2014, finished fourth and fifth, respectively, in 2015.

Sundon may have an all-American pedigree but trotting devotees Down Under have adopted him as their trotting monarch as he led the trotting lists in both New Zealand and Australia once again. Sundon has been a fixture at the top of the trotting sires list there since… well, forever.

Sundon is a son of the meteorically fast Arndon, a trotter that Delvin Miller told me could probably go head-to-head with the great pacer Niatross. Sundon is out of a B.F. Coaltown mare whose dam is a half-sister to Songcan and Songflori, American stars of the 1970s.

As mentioned earlier, SJ’s Photo made a lasting impression on horsemen in Scandinavia with his races there two decades ago, and he was an impressive winner of the Copenhagen Cup. So it’s no surprise that the top sire in Denmark in 2015 was his son ENS Snapshot.

Following him were Great Challenger (Conway Hall), Love You, Dream Vacation, and Trophy Catch. The latter horse is a Pine Chip half-brother to Moni Maker that showed so much early promise for Jimmy Takter.

SJ’s Photo made a lot of Finnish fans when he won the Finlandia race there and his son Classic Photo, the 1-2 favorite in the 2005 Hambletonian, was the top sire there in 2015.

Love You was second, followed by Like A Prayer (Lindy Lane), Diesel Don (a brother to Muscle Hill), and Classic Response (Yankee Glide).

Love You showed up on top in Holland in 2015 for the second straight year.

Trailing him on the leading sires list are Virgil Boko (Express Ride) and Offshore Dream (a two-time Prix d’Amerique winner in France).

Edu’s Speedy was easily the top sire here after ranking second in 2014. He is a son of Speedy Bandito (Speedy Somolli).

In the eastern Europe nation of Slovenia, Allison Hollow, a son of Supergill best known for upsetting Malabar Man as a juvenile, ranks at the top.

We began this discussion with reference to a trio of grandsons of Peter The Great, so let’s see how their influence is felt in the world of trotting.

The stallion champs tracing in their male line to Sam Williams are the French stars Love You and his sire Coktail Jet.

The leaders tracing to Scotland are Sundon, Edu’s Speedy, Varenne, and Gros Grain.