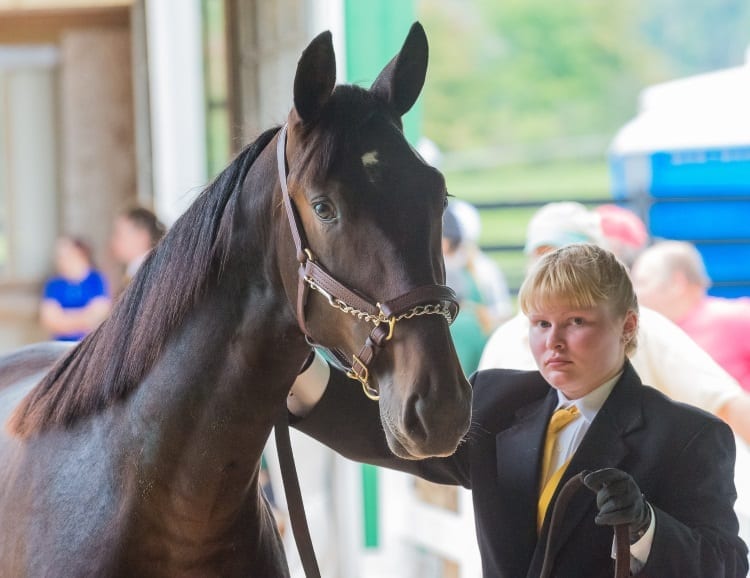 Morrisville: More than just another sale

Despite having to move up the original date of its 2016 yearling sale, supporters  are hopeful the Morrisville Yearling Sale can build on the momentum of last year’s  sale to further the education of the sport’s next generation.

Supporters of the Morrisville College Yearling Sale (http://www.morrisvillesale.com) aren’t thrilled they had to move the original date of this year’s sale up a day, but they are still convinced they can build on the momentum achieved last year when the Morrisville average of $15,540 was up 43 per cent compared to the 2014 sale.

“We’re going to have great horses at this sale, just like last year when we blew our numbers out of the water,” said Michelle Crawford of Crawford Farms of Durhamville, NY, which sold the 2015 Morrisville sale-topper Royal Pinot (tf, RC Royalty—Graduation Party) for $55,000 to Ron Burke.

“We had fewer horses with more of a punch on pedigree. I know my stock going to Morrisville is a lot better than even last year and we sold the sale topper. So, I’m really excited about it.”

Originally slated for Sunday, Sept. 18, the day after the New York Sires Stakes 3yo Excelsior Finals at Vernon Downs, the Morrisville Sale — held on the campus of Morrisville State College just 20 miles south of the track — opted to shift to the afternoon of Saturday, Sept. 17 when the Goshen Yearling Sale also decided to also hold its sale on Sept. 18. The Morrisville sale will start at noon on Sept. 17, giving buyers plenty of time to get to Vernon Downs for the races.

“I am of the opinion that it will be a great weekend,” Crawford said. “You can go to the Morrisville sale, go to the races and get up in the morning and you can drive right on to the next sale.”

Crawford said supporting Morrisville is important to her and the other consignors. “We love Morrisville,” she said. “We’re close to a state-owned college that has a program for the students that are on the forefront of our industry. So, of course, we would want to support a school like that.”

The annual yearling sale, which began in 1989, provides critical financial support to the Morrisville Equine Program, one of the few post-secondary programs that has proven to produce students that work in the standardbred industry.

“The proceeds that come out of the sale go right back into our overall budget, which is used to purchase trucks, trailers, tractors and microscopes,” said Morrisville’s reproductive manager Erin Shantal, a Morrisville graduate.

Morrisville stands two stallions — trotter Mattingly and pacer Third Straight — has its own broodmare band and produces its own yearlings to sell at the sale. Morrisville sold 18 yearlings in 2015 and averaged $17,500, which was higher than the overall sale average.

“It’s great especially for the breeding students here,” Shantal said. “They see it from A all the way to Z. They have the mare, they breed the mare, they get the mare pregnant, then they foal the mare out and then they have the baby, then they get to see them grow up… In the summer, when school is out, we have breeding interns and they still work with the babies and they still work with the yearlings. But what is also unique is during the summer we do a two-week period where the students go over to the standardbred driving program and they actually get to drive some of the young horses. So, they see the broad spectrum of everything.”

“The program is extremely important not only to New York State, but the equine industry as a whole,” Reid said.

Crawford said she and other farms have been proud to hire Morrisville graduates. Bobbi Jean Carney from the class of 2014 works at Crawford. Amber Pruchnik from the 2016 class is a current intern at Allerage Farms. Gina Dailey, a 2010 grad, works at Diamond Creek Farm and Alisha Hite from the class of 2015 works at a major thoroughbred breeding farm in Kentucky.

“I employ them,” Crawford said. “Diamond Creek employs them, Winbak employs them and many of our top breeders employ them. I don’t know how you ignore that. I don’t understand how some people say, ‘I’m not going to send Morrisville horses.’ Though, we do have major support. We have Crawford Farms, we have Preferred Equine, Brittany Farms, Lindy Farms, Tara Hills, Allerage Farm, Harry Rutherford’s Cool Creek Farm and Lakeview Equine among others.”

Crawford said what is even more important is Morrisville has been a proven launching pad to New York Sires Stakes success.

“I just think it’s a great program,” Crawford said. “I certainly look forward to selling there every year. I think the pedigrees have gotten better and stronger and I think the kids are going to benefit from this type of environment. They’re going to get invaluable experience.”