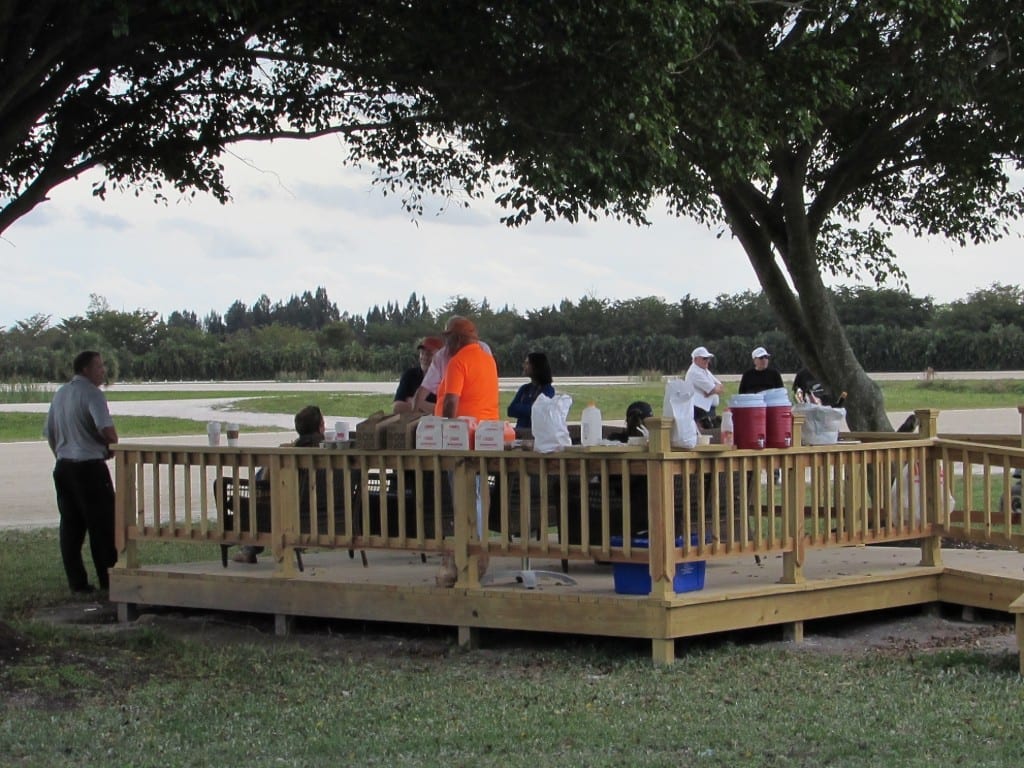 Harness racing new winter “it” spot at Sunshine Meadows was buzzing  Saturday like never before .

Billy Bigler took occasional sips of a huge iced coffee, a hint of a satisfied smile playing on his lips as he hung near the back corner of his creation and watched it come to life Saturday morning at Sunshine Meadows in Delray Beach, FL.

Harness racing’s new “it” spot has generated a solid crowd of the sport’s bigwigs most Saturday mornings this winter. But with more than the usual crowd of leading owners and breeders in town for Sunday’s Dan Patch Awards in Fort Lauderdale, The Deck — as they call it — was buzzing like never before thanks to first-time libations courtesy of Adriano Sorella who brought champagne to spike the orange juice and Baileys to punch up Dunkin Donuts’ finest. It all served to help wash down the bagels, cream cheese, nova salmon and blarney.

Asked if he had started a bad precedent by adding alcohol to the proceedings, Sorella quipped, “Yeah, we’re going to have to do this every weekend.”

In the middle of it all was Peter Wrenn’s chocolate lab Charlie who has benefited most of all from the sudden weekly bounty of The Deck.

“She seems to know when Saturday comes because she’s here waiting for us on Saturday mornings,” said Murray Brown as he handed over a generous dollop of grub to the grateful canine.

The $4,000 wooden structure located trackside beneath two shade trees at the equestrian centre, was the brainchild of Tony Alagna, who bankrolled The Deck with Frank Antonacci, Sr. and hired Bigler to build it.

“The old deck that was here was just falling down. The railings were falling down. I built Tony’s office for him. So, he wanted me to build him something here,” Bigler said. “He has so many owners coming out, he’s in a position like someone like Stanley Dancer would be. When you have people spending big money for horses, you have to give them something. If you’ve got a $400,000 horse in there and you come out and the deck’s falling down and there’s a bench there that’s rotting away, that’s not good.”

Just contemplating the stature and net worth of the names in attendance Saturday was mind-boggling. Asked if The Deck had been the catalyst for some business deals, Brown said, “a little,” then contemplated the question for a second and corrected himself.

“Actually, a lot of business,” he said.

What began as a little meeting place to watch babies train started to take on legendary status thanks to social media and the addition of food and drinks on Saturdays.

“I started bringing bagels and cream cheese. Then we added nova salmon. Then we added fresh OJ. This is a first for wine and champagne. That’s Adriano’s doing,” Brown said.

“I think more and more people realized it’s fun. The camaraderie. It’s not just the horses, it’s not just the races. It’s being around people you know and having fun. Myron (Bell) generally, hosts lunch after. And Myron conducts tours.”

On a warm, sunny morning Bell is clearly in his glory holding court and handing out homemade programs featuring today’s training lineup.

The Deck has gone so well, there’s already talk of expansion for next year.

“We’re actually going to build a tree house. We’re just waiting for the trees to get a little bigger,” Bigler said with a grin.

Later, he will consult with Alagna about whether to paint The Deck. There’s already been some discussion among the guests about whether it should be Alagna’s colors, that of Antonacci’s Lindy Farms or split evenly between the two.

Sorella, who owns a Internet marketing firm based in Toronto, said perhaps each floorboard could be sold to advertisers.

After all, one day, someone may want to add a sign stating, “Here Once Stood Some Serious Harness Racing Heavyweights.”