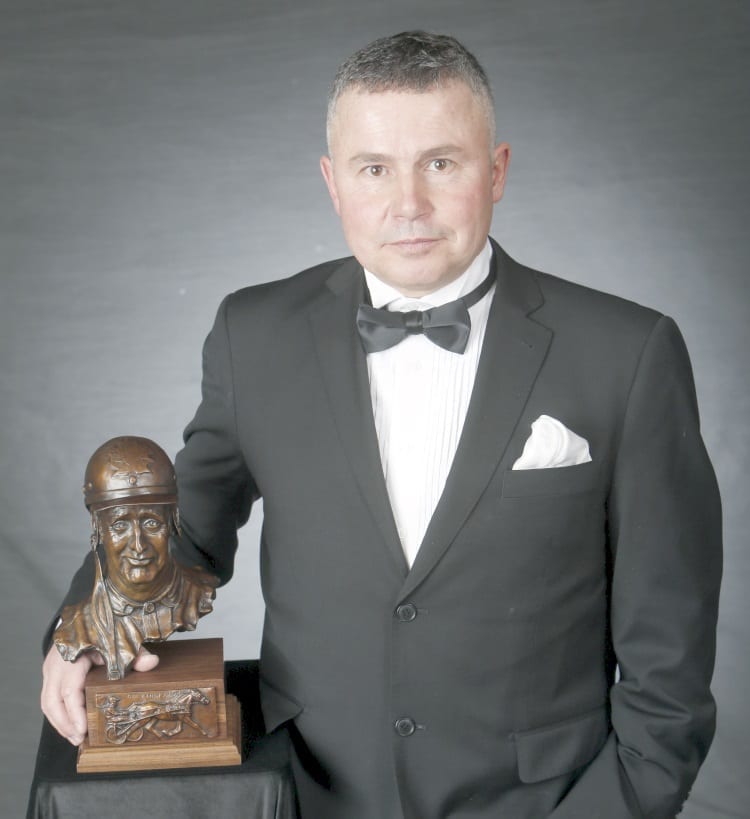 Inside the Natural Hat Trick of Richard Moreau

The Quebec native’s meticulous work ethic is key in making him the first person to be named Canada’s trainer of the year three straight years.

He’s a record-setting horseman. He’s led all Canadian trainers in wins for four straight years. He’s the man behind a stable that’s constantly in flux. Welcome to the world of Richard Moreau.

In hockey parlance, it was a natural hat trick for Moreau at the recent O’Brien Awards, a night in which he was crowned Canada’s top trainer for the third consecutive time.

Up until he achieved the feat, no trainer had ever received the honor three times in a row.

On this cold, but sunny morning, Moreau wasn’t busy polishing his trio of trophies – that’s not his style — when he didn’t answer his cell phone.

He was simply doing what’s made him successful at his craft – meticulously setting the table for more victories.
“No way would I ever do that,” he said with a laugh, in regard to shining up his O’Brien haul. “I just love doing this, being in horse racing. It helps me stay young and that’s a big part of why we keep on going.”

Moreau’s numbers are certainly of the head-turning variety.

Last year, he topped all Canadian trainers in the wins category with a whopping 271. He was also runner-up to Jimmy Takter in earnings with $3.6 million.

“I have a lot of respect for Jimmy Takter,” said Moreau. “You feel lucky to be in the same category as him. I didn’t expect to win the O’Brien this time, but I feel very fortunate that I did.”

Moreau, who hails from Quebec, had some serious horsepower to work with in 2015. Stars such as Ms Mac N Cheese, Evenin Of Pleasure and Sandbetweenurtoes each delivered memorable on-track moments for the Moreau barn.

But there were also some tough losses along the way.

Sandbetweenurtoes just missed taking all the spoils in the prestigious $324,350 Breeders Crown final for older pacing mares in a race that was contested at Woodbine. Played out in a driving rain, it was Colors A Virgin who stormed home to notch a nose victory. While the runner-up loss admittedly stung, Moreau isn’t the type to let a tough beat linger.

“One second,” he interjected, in response to how long it takes him to get over a defeat. “I don’t get mad. The way I see it, there’s always tomorrow. It’s never about the last race. It’s always about the next race.”

For Moreau, it’s also about striving to increase the quality of his competitors.

“What drives me is to constantly upgrade the stable, to find those horses that can compete and win the big races,” said Moreau, who runs a 40-horse stable based in Ontario.

Having friend and top-tier driver Sylvain Filion as a driving force, so to speak, is also a big piece of the winning puzzle. The veteran reinsman, who won his third top driver O’Brien, piloted a number of Moreau’s horses to victory on the Woodbine Entertainment Group (WEG) circuit.

In mid-December, the duo teamed up to sweep the first leg of the Valedictory Series.

Call it a match made in harness racing heaven.

“Sylvain is very talented,” praised Moreau. “He’s mature enough and he knows how to win.”

So, too, does the man who studied finance in school, the one that has become money-in-the-bank in the standardbred world.
Moreau, who owns his own farm, situated about a 10-minute drive from Mohawk Racetrack, knew his true calling well before it ever came to fruition.

“I remember the times when I was in Quebec that I would take a 10-minute bus ride, a 15-minute subway ride and then I’d hitchhike the rest of the way to get to the stable gates at the racetrack,” he said. “It was a life in racing that I was always dreaming about.”

And it’s one that Moreau, who topped the trainer standings at both Hippodrome de Montreal and Rideau Carleton in 2004, gives an enthusiastic thumbs-up to.

“This isn’t hard work for me,” said the 51-year-old. “I feel very lucky in so many ways to be part of this. There is plenty to be happy about.”

It is, in every conceivable way, a definite win-win situation for the record-setting Richard Moreau.