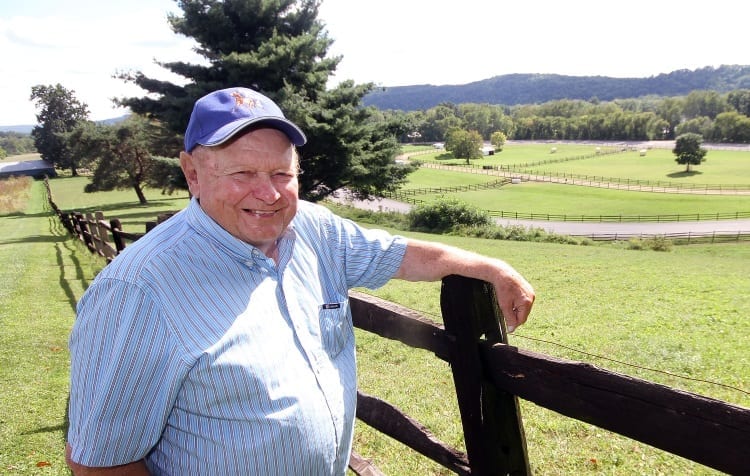 Never in the history of harness racing has the phrase “coming from the clouds” been more appropriate than when applied to the last-to-first victory by Trustworthy Kid in Wednesday (Feb. 3’s) $22,500 preferred handicap trot at The Meadows – the last victory of a storied career for legendary horseman Walter “Boots” Dunn, who had passed away that morning.

Driver Brian Zendt had the entire field in front of him at the five-eighths pole, but he rallied “The Kid” five-wide off the final turn, charging furiously to the finish to win by a length in 1:55.4 for Boots’ Dunn Stable (see race replay here).

Hall of Fame announcer Roger “The Voice” Huston said he can never recall being so emotional behind the microphone. “I came to Pennsylvania 40 years ago, and since the beginning I’ve grown in respect for Boots Dunn, as a horseman – I drove against him in the Billings series – and as someone who bounced back from huge challenges.

“I was emotional when we paid tribute to him at the start of the television show, but I had forgotten that he was entered in the featured trot. I saw Trustworthy Kid last, and then he started making that big five-wide move on the turn – and I never wanted a horse to win more in my entire life. He got up late, and after the race I was shaking so badly, I could barely speak – but I did get out that this one from Trustworthy Kid and Brain Zendt was for Boots Dunn.”

Boots was an eight-decade participant in harness racing, starting out not long after World War II on trips with his dad Wilbur “Cuddy” Dunn to campaign at Cleveland-area raceways, and was a Meadows regular from the day the western Pennsylvania track opened in 1963,109 miles almost due north from his hometown of Cochranton PA. He campaigned his own stable, often with the listing of breeder/owner/trainer/driver, and he was proud of the fact that his 1,152 career sulky successes are believed to be the North American record for an amateur driver. (Others besides Boots were proud of his being a pure “amateur”: when in 2011 a scratch reduced a field at his local fair in Meadville PA to a walkover, trainer Eileen Lineweaver was gracious enough to offer Boots the catch-drive – and after the race, there must have been a dozen people warning him “Don’t take the driver’s fee [5% of what the horse won was $23.75], or you’ll lose your amateur status!”)

It is perhaps fitting that Trustworthy Kid will bear the distinction of being Boots’ final training success, as the horse has several qualities that resonate throughout the Dunn Stable, and have done so for years. He is a homebred, as Boots purchased his dam Penn Worthy Lane for $13,000 at Harrisburg in 2002. Penn Worthy Lane has had eight foals of racing age – and Boots got all eight of the trotters to the races at two (and got freshman marks on six of them), and then continued to campaign these homebreds at age three. The fillies in the stable often are retired to the breeding shed, where they join other Dunn “foundation mares” such as Penn Worthy Lane.

Trustworthy Kid, by SJ’s Caviar, has been the most successful of his dam’s offspring, with earnings of $365,502 and a mark of 1:52.4f taken last year. He campaigned at the fairs for Dunn at two and three, but showed a little extra ability as a sophomore and was entered in the Pennsylvania Stallion Series, the level below the Sire Stakes, where he went 4-2-2-0 in the prelims and then was second in the final.

Into the overnight ranks went “The Kid” at four, and more specifically, The Meadows’ overnight ranks: of his 73 starts after age three, 69 of them have come over the Lightning Limestone, the other four divided between Pocono and Philly, likely as a van mate for a stakes horse. Trustworthy Kid has earned over $70,000 in each of his campaigns from three through six, and in 2016 he’s already bankrolled $26,200 with two wins and a third against the best diamond-gaited horses at The Meadows.

And he has never known a home outside of Dunn’s shedrow.

Dunn’s genius didn’t lie just with the horses – he accomplished a tremendous amount in the “human world” as well. He was a family man in the traditional sense, devoted to his beloved Donna through 54 years of marriage before she passed away in 2005, and to his daughters, granddaughters, and a great-granddaughter, many of whom have strong connections to the racing game.

Boots also regarded the harness community as a “family” of his, in a different way, but he treated everyone alike as if they were family. He was a tireless worker for his local Crawford County Fair Board as its speed superintendent, and was a better politician than most people ever had an inkling of, both in his community and in the larger harness world. He served as chairman of the USTA District 7 (Pennsylvania) for many years and remained on the board after giving up that chairmanship, as physical challenges (many of which would have destroyed or incapacitated a lesser man) finally started to gain on that colt-like, sparkling energy that was his trademark.

His impact on Pennsylvania racing, especially its fair racing, is impossible to overstate. It’s probable that at one time or another he offered advice to every county fair operating a harness meet in Pennsylvania, and his background in the family construction business made him especially valuable as a trackman, from advising on the best composition of track materials for a given oval to going out and working the track himself (often with equipment bearing the sign “Dunn Construction Company,” and for which many fair boards never received a bill).

Probably the phrase he said second-most-often in life was “I think I can help you with that.” Boots Dunn had a generous spirit and an amazing knowledge of virtually every aspect of harness racing. Maybe it was all those years of tinkering with trotters, getting his horses “set up” just right for that demanding gait, that sparked a creative mind interested in challenges, and helping people solve them.

But the phrase he probably used most often (at least within the writer’s earshot) was “I can tell you exactly who you should talk to about that; let me see if I have a phone number…”

They say that what makes a good college student is not knowing everything, but knowing where you can find the answer to everything. Boots knew where to find the answer to everything – sometimes by his vast “connections,” but perhaps more often by dint of his own hard work, logic, patience, and kindness. By whatever terms you can measure success in life, Walter “Boots” Dunn was the richest man in Pennsylvania harness racing.

We hope he will keep watch over us. Trustworthy Kid would suggest he is doing just that.