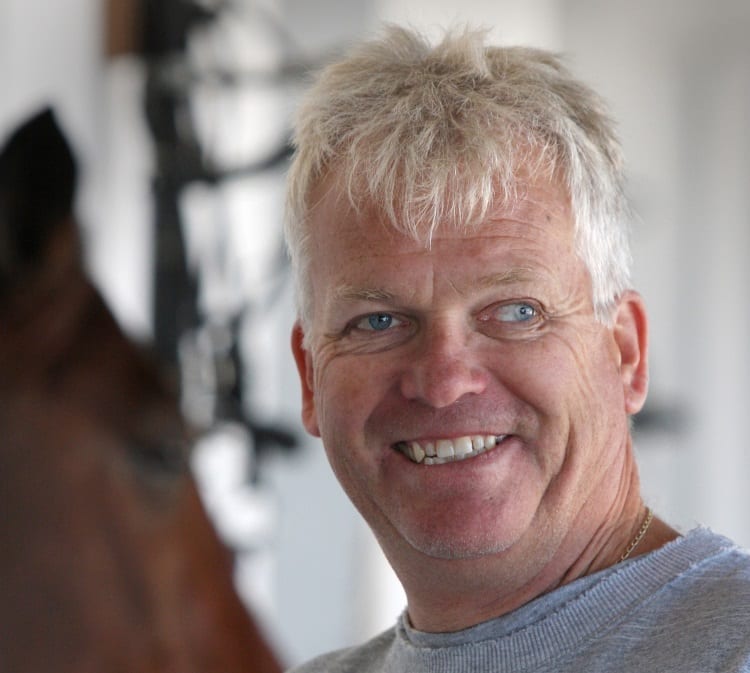 by Dave Briggs
photo: Cancer cost trainer Dan Hennessey sight in his left eye in 2002 and a detached retina in his right eye left him completely blind in 2014. (Ann MacNeill)

Dan Hennessey has no idea how he avoided an accident and pulled off the highway safely. The trainer just remembers the panic setting in as he sat along the road alone, frightened and suddenly completely blind somewhere in the middle of North Carolina about 500 miles from his home in Coconut Creek, FL.

“It was pretty rough. I can tell you that. There was a lot of emotion because I didn’t know what it was,” Hennessey said.

It was late October of 2014, about a week before Hennessey’s 60th birthday. The trainer was making his annual trek back to Pompano Park after a summer racing at Saratoga Harness when he lost sight in his right – and only working – eye.

“It was just like somebody pulled a curtain over my eye,” said Hennessey, who lost his left eye to cancer in 2002 when the radiation used to eliminate the melanoma also destroyed the optic nerve.

So one can only imagine Hennessey’s mental state as he sat on the side of the road, fumbling for his iPhone. Unable to dial a number, Hennessey used Siri to call his brother, Hall of Fame driver Wally Hennessey, for help.

“Thank God for technology and being able to talk to the phone and say, ‘Call Wally.’ He reached me and I knew somebody in Georgia that could help,” Wally said.

A few hours later, Dan and Wally’s mutual friend, Billy Griffin – a horseman with an air conditioning business in Savannah, GA – arrived to rescue Dan and take him to hospital.

“If (Griffin) wasn’t there I don’t know what I would have done. I was right in the middle of nowhere,” Dan said.

An ophthalmologist in Savannah discovered Dan’s retina had detached. Immediate surgery was required, but the recovery would require Dan to remain in Georgia for at least two months. That’s when Griffin offered to drive Dan more than five hours back to Florida where the surgery was performed the next day.

Dan did it all with little, or no, sight. Not that it was easy.

“It kind of turned everything upside down because I really can’t go on the track much anymore,” said Dan, who struggled through the winter of 2014-15 with limited sight after the surgeon reattached the retina with silicone.

In March, when the ophthalmologist replaced the silicone with an air bubble, there were complications.

“It bled and hemorrhaged and from that I was blind, totally, for about six weeks,” Dan said. “I had another surgery after that. That didn’t take. The retina detached again. I had to have another surgery after that… I was legally blind right up until my last appointment, which was three weeks ago. I’ve had considerable improvement. I still don’t see well, but a lot better than I did… But the silicone is still in there to hold everything in place.”

That means Dan’s ordeal is far from over. At some point the silicone will have to come out.

Not that Dan is complaining.

As for the horses, Dan said he couldn’t have continued to work without the help of Wally and caretaker Raia Walgreen.

“Her and Wally are my eyes. If there’s something to point out I’ll go and look at it with my hands. See if there’s a bump or a cut.”

Wally said there’s no way his brother could have continued to train horses without having a lifetime in the game.

“Instinctively, because this is what he’s done his whole life, it just comes naturally to him,” Wally said. “He does need his vision, but the things he’s doing, he’s almost like a machine. He’s done it his whole life and all he does is turn on the machine.”

Though his limited sight is much worse at night, Dan still goes to the races to help get his horses ready.

“I still bang away. I don’t warm up or anything anymore, but I’m in the paddock helping out and making sure everything goes okay,” he said.

Away from the track, Dan said he’s incredibly thankful to have a strong support team.

“Wally and his wife, Barb, have been fantastic,” Dan said. “Barb bent over backwards taking care of me and feeding me. Wally runs me all over the place. But the biggest godsend is my youngest son, Jacob… He’s only nine, but he was there on the weekends and after school. I am divorced, but Jacob was there to get whatever I wanted and needed.”

Wally said it was important to help his brother maintain a measure of independence.

“He’s like the rest of us, if you lose your independence you lose everything. He didn’t want to lose it, so he’s pretty tough that way. He’s a lot tougher than I would be, I think. But you never know until you’re put into that situation,” Wally said.

Fellow horsepeople are helping out, too, Wally said. The Saratoga horsepeople held a fundraising benefit for Dan this summer to help offset some of the costs of his medical bills that insurance does not cover.

Despite significant challenges, Dan said he didn’t even think about giving up the horses. It’s a work ethic he said was forged in a working class family of nine children raised in Prince Edward Island.

“I think what really helped me more than anything else is being able to get back to the horses,” Dan said. “When I was completely blind, if I went to the track somebody had to take me by the hand for me to get to the barn… As far as declaring the horses in, I’ve got to get somebody else to do it for me or verbally put them in. I was always a big reader and I can’t read anymore.

The horses, he said, have been the best medicine.

Now that his sight has returned, somewhat, Dan can’t resist occasionally sneaking out on the track.

“I’ll go out the odd time with a quiet horse late in the day when there’s not a lot of activity,” he said, “but that’s about it. I’m in the barn mostly all the time now.”