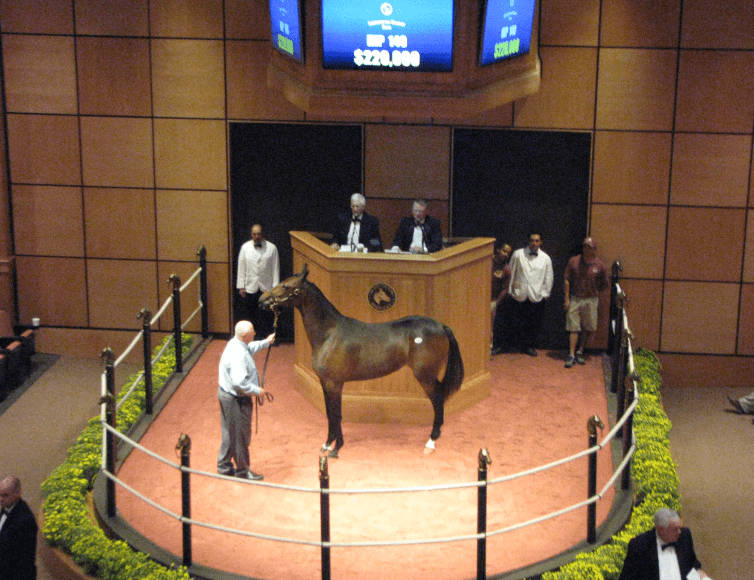 Lexington Sale Holds Its Own

LEXINGTON, KY – Night two couldn’t match the opening round of the Lexington Selected yearling sale, but no one seemed to be complaining. They sold 154 horses last night for a gross of $8,621,000 and an average of $55,981.

That amounted to a decline of just less than 1 percent over last year, or to be precise, 0.99 percent.

“I certainly wasn’t unhappy with the results tonight,” co-sales manager Randy Manges said. “The very small decline is no big deal. I think we are in good shape the rest of the way through. We have a strong consignment (Wednesday). With any sale, when you get to this point there will be some strong spots and some soft spots.

“I always like to be up, but if we are even the rest of the way I would be satisfied. When you consider everything that is going on with the Canadian dollar and the Euro there are concerns. But the participation by the Europeans has been fantastic. Even the Canadian buyers have been great and that’s been a pleasant surprise.”

After two sessions, $19.3 million has been spent for an average of $76,805 per yearling. That is a three percent increase over last year, not too shabby considering last year’s sale was so strong.

The night two sales topper was Hip 140, a Cantab Hall filly named Thats All Moni. After a quiet first night, Jimmy Takter stepped it up and bought this one from consignor Preferred Equine.

Takter was shopping at both ends of the spectrum last night as he also bought a horse for $20,000. His bargain basement buy was Hip 141, UFA Nephew Hanover, who is by Explosive Matter. Explosive Matter is the sire of Takter’s Hambletonian winner, Pinkman,

Coming in a close second in terms of session topper was Hip 129, Seven Stars. He is a Chapter Seven colt who was purchased by Myron Bell, agent. The consignor was Spring Haven Farm.

The Cancelliere Brothers made their most expensive purchase thus far at at this sale, taking home a Somebeachsomewhere colt named Rum Punch.

Super sire Muscle Hill had another strong night and remains the leading sire in the sale in terms of average price per yearling. His yearlings have sold for an average of $99,833. Somebeachsomewhere leads all pacing sires with an average of $89,219.