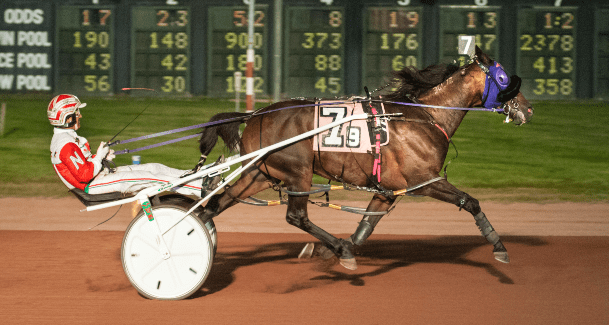 R. Gauwitz Hanover is making a name for himself by the number of times he’s been claimed this year, while at the same time making his namesake proud.

The six-year-old Modern Art gelding, named after a 75-year-old disabled individual who lives in a nursing home in Illinois, has been claimed 11 consecutive times this year racing in Philadelphia. R. Gauwitz Hanover is scheduled to race Sunday in a $20,000-$25,000 claiming handicap race at Harrah’s Philadelphia and one of his former trainers, Marty Fine, told Harness Racing Update he has interest in claiming him back.

But there will likely be several claims put in for the horse because that’s been the scenario since July 11.

According to David Carr of the United Stated Trotting Association, the record for consecutive claims belongs to the pacing mare Champagnesupernova, who was haltered 13 times in a row in 2003 racing at The Meadows. R. Gauwitz Hanover is tied for second with the pacer Automatic Teller for consecutive claims. Automatic Teller was claimed 11 times in succession in 2013 at Harrah’s Philadelphia and Mohegan Sun at Pocono.