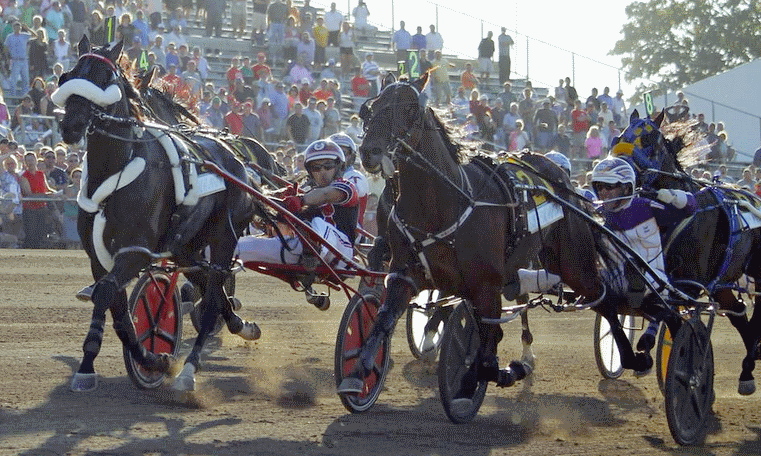 Wiggle It JiggleIt is Why We Love This Glorious Breed

I watch harness racing for a lot of reasons. I bet, I am a fan, and sometimes I watch as a horse owner. But what really gets me excited, what keeps me glued to watch any event, are great horses. I think I’ve watched just about every stakes race in the sport, since forever. It’s just what I do, and a lot of you do exactly the same thing.

I don’t know about you, but why I like it so much is that I really like the Standardbred, and what he or she represents. We do not have super well-bred million dollar yearlings or homebreds. We don’t go to a two year old in training sale and spend $10 million on a horse because he or she can travel 220 yards in nine seconds. Our horses are not sports cars with seven figure price tags, they’re SUV’s with eight cylinders, ready to take you where you need to go. They might have a dent or two, or a hitch, or an ailment, but the true great ones race through it.

Watch the old tapes of iron-tough Dan Patch going heat after heat, watch Most Happy Fella, or Albatross, or Rambling Willie. Take out some old video of the Pacing Machine, Cam Fella, or maybe have a look at Life Sign’s Little Brown Jug. You know exactly what I’m talking about.

Our great horses are just different. They have their own kind of greatness. That’s the pure joy of the great old-fashioned Standardbred.

In the first elimination today, Wiggle It was – for all intents and purposes – beaten. Barreling into the first turn he was three-high for a spell, and put in steps. Artspeak, who right now is as fast as any sophomore in harness racing, had rail control and a massive advantage. Montrell Teague did what he had to and battled Artspeak, mercilessly first-over, putting in a step or two on the far turn. Most everyone expected Artspeak to come back on, to take advantage of the well-spent and funky gaited challenger. But that never happened. The big horse dug in and got the job done.

Moving on to heat two, we probably all expected a usual second heat, i.e. a horse at 1-5 moving to the lead, securing it, and dawdling through softer fractions to victory. I am sure Team Teague would’ve loved that, but it didn’t happen. Instead, we saw almost an exact replay of the first heat.

Into turn one, Wiggle It again put in some steps and an audible gasp came from the crowd of 46,000. This time it wasn’t Artspeak who held rail control, but heat one winner Lost For Words and driver David Miller. Having to move early, just like he did in heat one, Montrell and the big horse battled the talented Brian Brown-trained colt and this time it looked like the tandem’s luck ran out. Only it didn’t. You all saw what happened.

A good deal of the time we are prone to hyperbole when a horse wins a race that’s fresh in our minds. This isn’t one of them. This horse was not supposed to win the first heat, let alone the second. This horse was beaten, both times. In fact, I submit that if you showed the best handicapper in the history of the sport the first seven-eighths of a mile of both heats, turned off the video and asked him or her to predict the winner, Wiggle It JiggleIt would be answered in the affirmative a grand total of zero times.

So far this century we’ve been blessed in this sport to see a lot of good performances. We saw Somebeachsomewhere hung the mile in the Messenger, locking wheels with Shadow Play in that driving rainstorm, and still extricating himself to win. We saw Mission Brief in a world of her own in Lexington. We saw Snow White at the same locale, blow the doors off a world record. We saw Muscle Hill win the Hambo under a hold in 50. We saw Eternal Camnation race three high for almost three-quarters of a mile in a Classic Series leg and still win.

For my money, this one needs to be included in that list, and if you place it at number one with a bullet, I don’t think you’d get too many arguments.

Congratulations to George, Montrell, Clyde and the entire crew, but most of all, thank you to Wiggle It Jiggleit. You are a true throwback, and it’s horses like you that remind us why we all fell in love with this breed in the first place – the tough as nails, fight through adversity, try your guts out, Standardbred.

They shut down the government for Jug Day. Seeing the Jug was one for the ages, I don’t think they were disappointed.

“I watched a little of the USTA speaker series and caught a few gems from George Teague, son Montrell and trainer Clyde Francis. There were so many snips that made me say “that’s harness racing.” Trying to pry information from a Thoroughbred trainer about a horse’s health and soundness is like uncovering the combination to Fort Knox. In harness, George and crew were open, honest and willing to discuss their horse. It’s a huge difference between the two sports. I also enjoyed George’s comments about racing horses. ‘We are not going to duck anyone, we won’t overmanage him, he is in the box to race’, paraphrasing. That’s old-time harness racing.

Jugette Day was enjoyable, and Sassa Hanover – last year’s bridesmaid to JK Shesalady- rose to the top with a deserved victory. In the pools, the power of the pick 4 in harness racing – especially those of the 15% takeout or lower variety – was on display. The pick 4 in race 12 outhandled the exacta and trifecta pools combined. That’s rare folks. Overall, handle was good.

Spider Man Hanover is a big strong guy who really lit up the teletimer in the 2nd division of the Standardbred. I think we have to keep an eye on this son of Western Ideal late this year, and into next.

I’m pretty amazed how these drivers go for it in the Fair finals Jug week. To see this many back halves of 1:01 we’d need to step into a time machine and dial up 1971 Roosevelt.

Speaking of Sam McKee and crew, I thought they did a good job again this year.

46,721 was the announced attendance. The Little Brown Jug – no matter what happens to the sport of harness racing – will be around forever.