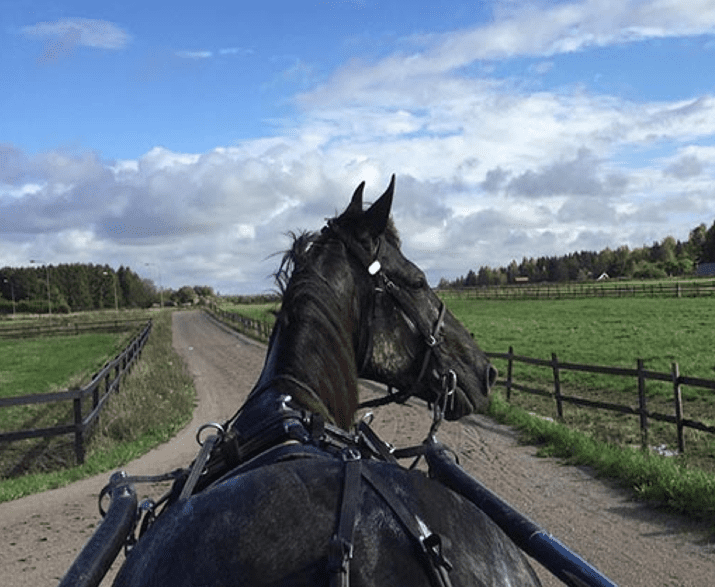 Nuncio is The Rage in Sweden

Here in Sweden, 4-year old Nuncio is developing into what a political editorial page in a daily newspaper quoted as a “dark dream.”

“People get in touch and want me to race with him, just for the chance to see him”, says Stefan Melander, the driver, trainer as well as the owner of Nuncio. “Nuncio is a special horse. Wise. Scarlet Knight and Gigant Neo were, of course, also special, but in my eyes Nuncio is different. He is so unique. Nothing short of a miracle. What differs him in a vital way is that he’s such a kind individual”.

Last week, Melander raced with Nuncio on Gävle racetrack, two hours from Stockholm. This racetrack is widely known as suitable for fast performances, perhaps because it was set up on a morass. For the first time racing in Sweden, Nuncio had no shoes at all. The task was easy, but he finished on 1.52,0, a national record, and the quickest time in Europe, this year.

Melander then said he could have gone faster, remarking the low temperature, and then pointing out Sebastian K.’s world record, as something to rub out next year.

But an adventure always begins where your feet are. Speaking to Melander he says that tomorrow is always a new day. You can’t know what will happen.

“We’ll see, if Nuncio will race or if he goes into breeding. Most likely he’ll race,” he said. “I have not decided if Nuncio will be seen in the U.S. again. But since I’m curious by nature and if there would be a strong interest, I’m into trying new things. Of course, it would be a dream to have Nuncio at a stud farm there, and then go to an auction and find yearlings of Nuncio. Such U.S. auctions are the best in the world of trotting. But I wouldn’t call it impossible to find a new Nuncio in Sweden as well, since bloodlines have improved here.”

While Melander is not sure what he will do in the future with Nuncio he is enticed by racing him over the super-fast track at Pocono, where Sebastian K went the fastest trotting mile in the sport’s history, and finding out what he can do.

“Transmitting the fast running-times he’s accomplished in Sweden, it would of course be exciting to try him on the ground at Pocono,” he said.

So, Nuncio has been closely defeated twice in 2015. That was in The Elitlopp at Solvalla racetrack in May. There, Nuncio was the youngest contender in the race. And his performance in the final was breath-taking, going three-wide without cover all the way, with three turns over the mile. Just a head from winning. His former trainer Jimmy Takter was on hand with Maven, and acknowledged: “the show was by Nuncio.”

“You know, dispositions and tactics are so different in Sweden, so yet, I haven’t made a bold try with Nuncio behind the gate. He was so calm and nice that day in May and I didn’t want to quarrel with him, so I just kept our position. It was a pity that John Campbell couldn’t make it to drive him that day. If there will be a new try for The Elitlopp, I hope Campbell can make it,” Melander says today.

“The successes in the U.S. were unbelievable. I think I was a good owner during that time. I never interfered in the plans for him, but what I said was: ‘I want Campbell to drive.’ Due to lack of time I only saw him live twice in the U.S. The two years he was there, Nuncio got in a hurry, but, as most living creatures do, he’s matured. When he came here I had never driven him. Starting up anew on my farm, I wanted no knowledge of earlier methods. I want to train him the way I do it, starting from well-leveled scratch, so to speak”, says Melander.

If the Elitlopp a major task this year, so was The Sprintermästaren at Halmstad racetrack in the beginning of July. It took place on the west-coast, and that race is Sweden’s most important for exclusively 4-year-olds, over the mile. Nuncio won the final on 1.52,6, showing his instinct by putting his head first just passing the wire.