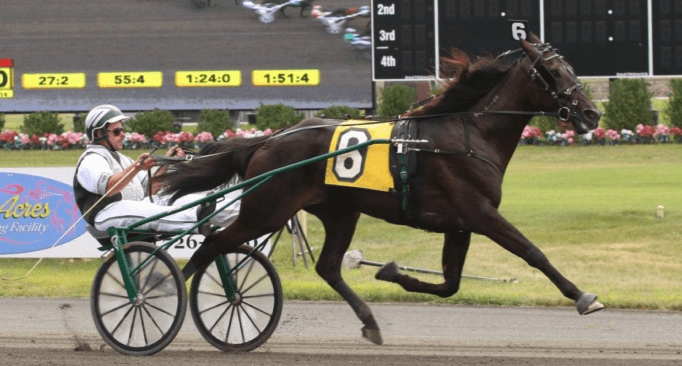 Yoder Hoping Natural Herbie Is Back In Form

So, what’s been the deal this year with Natural Herbie?

He was one of those feel-good stories last year, winning 12 of 23 races and earning more than $360,000. He proved he was more than just a horse that dominated in Indiana. Add in the fact he was driven, trained and owned by the same person – Verlin Yoder, whose name alone added to the lore of this trotter – well, you couldn’t help but root for Natural Herbie. Yoder was voted Horseman of the Year.

Fast forward to 2015 and the results haven’t been nearly the same. He has raced 15 times, winning three and earning less than $100,000. He won a division of the Maple Leaf Trot last Saturday at Mohawk Racetrack and will be in the $680,000 final this Saturday, by far the biggest race of his life. This time he will face the likes of JL Cruze, the dominant older trotter this year in North America, 2013 Horse of the Year Bee A Magician and the likes of Flanagan Memory, Intimidate, Obrigado, Lindy Tru Grit and Resolve, to name some of the higher-profile competitors in the field. His win last week begs the question, what’s been going on with the horse this year? Was last week’s win, beating the likes of Bee A Magician, Lindy Tru Grit, JL Cruze and EL Titan a one-off type of thing or perhaps a return to form?

“He’s had some issues,” Yoder told Harness Racing Update. “He’s had an abscess in a hind foot. It’s always taken him a while to get there. I don’t know if it’s because he’s older or didn’t want to do it before now. I don’t know. He seems to be headed on the right path now. I was surprised he won, but he was showing he was getting better again. Anytime you beat those horses you’ve got to be excited.

“Going into the race, I’ve got to feel good about it. He put in a very good effort last week and he’s had a good week. He seems to have come out of the race okay. Any time you step behind a field of horses like that, you don’t know because they’re all capable of doing it. Bee A Magician is a very nice horse. Resolve is a very nice horse. JL Cruze, when he’s on his A game he’s a very nice horse. And then you’ve got the closers – Intimidate, Flanagan Memory and all those guys. So you go into the race, hoping for the best but you’ve got to have some great luck for the simple reason they are all capable of doing it. They all have a license to be in the race.”

Yoder’s one-man operation of this horse has allowed him to take his time, not having to answer to anyone. There are few horsemen that have a horse of this caliber they own, drive and train – and do the blacksmith work. This is old-school all the way. It’s like the guy who owns the small store in the neighborhood competing against the big-box stores.

“What amazes me about the whole thing is how professional everybody is at this level – drivers, trainers, owners – and it’s a big honor just to be in there with those guys and having fun,” he says.

Prior to this horse, he never had anything close enough to regularly compete in these big races. He is that once-in-a-lifetime horse.

“I was lucky to fall across him,” Yoder says. “He just fit my program, and it just worked. It doesn’t mean I’m better than the next guy out there, he just worked for me.”

He bought him privately before he debuted as a two-year-old without having any idea he could be this good, let alone be less than $200,000 shy of reaching $1 million in earnings.

“I’d have never thought that, but if he does good he might become a millionaire,” he says. “That would be a lot of fun, that would be exciting, but that’s up to him. If he gets there, he gets there. I try not to think of winning $1 million. I’ve never had a horse that has made $1 million. He paid for the farm that I live on in Florida. I bought the farm before I bought him, but he’s the one that paid it off.”

It was in the winter of 2015 that Yoder had a chance to sit back and truly take in all that happened in 2014.

“If you think about it during the year you’re going to get in trouble, but after it’s all over and done with, that was pretty good,” he said. “If it wasn’t for him, I wouldn’t have been able to do this. He’s an unbelievable horse. He’s done things that most horses don’t.”