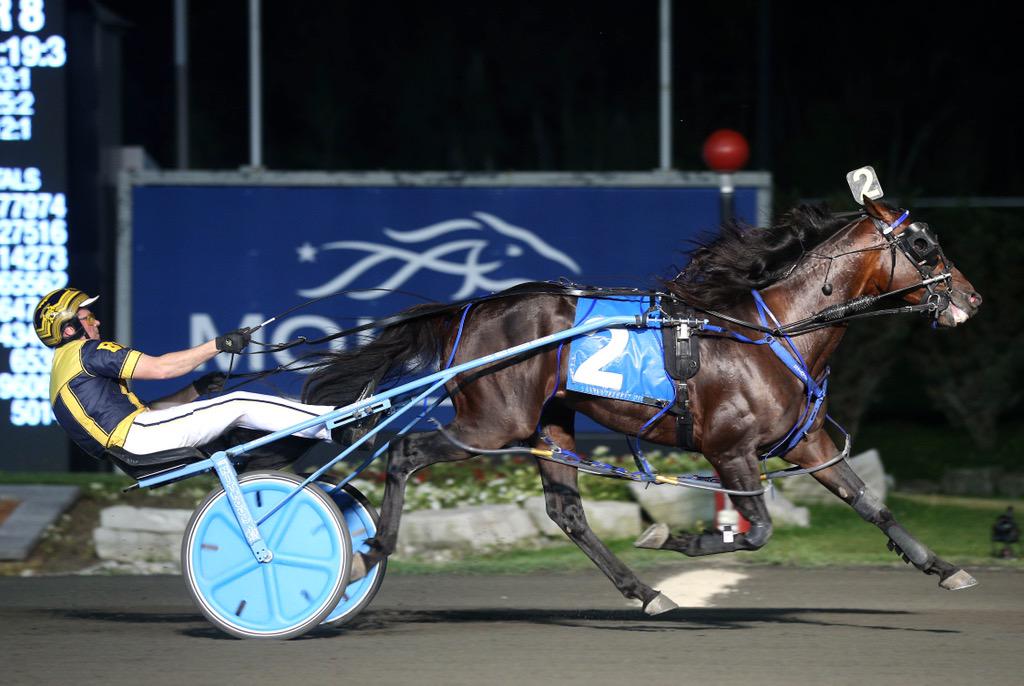 CAMPBELLVILLE, ON – Earlier this year, State Treasurer was known as a very good older pacer in Ontario, winning the Molson Pace three years in a row in London, but oh how he’s become better and better.

The six-year-old horse by Real Desire recorded his third major stakes win in the past four weeks, winning the $685,000 Canadian Pacing Derby Saturday night at Mohawk Racetrack, beating a competitive field that included nine others, including the great Foiled Again and improving Canadian-based horse Shamballa.

The Canadian Pacing Derby was part of a huge night for driver Randy Waples, who also won the Metro and Shes a Great Lady.

With Waples driving in place of Dave Miller, who was racing in Pennsylvania, State Treasurer made a sweeping move three wide up the backstretch going by Foiled Again, who had the lead by a quarter length in a time of 53 1/5. Nirvana Seelster had the lead after a quarter mile in 25 2/5.

State Treasurer never surrendered the lead once he claimed it, going to the three-quarter pole in a sizzling 1:19 3/5 and winning in 1:47 4/5 by 2½ lengths over Shamballa, followed by Limelight Beach.

The victory by State Treasurer followed up wins in the U.S. Pacing Championship and the Roll With Joe Stakes. He’s won eight of 14 races this year and some $880,000. Overall, he’s won more than $1.7 million in his career.

Pretty amazing for a horse purchased for a mere $6,500.
Alan Macdonald of Souris, Prince Edward Island bought the yearling for himself and his wife Sally and then added their nephew, Paul, and his wife into the ownership.

“He’s getting better with age, it seems,” Sally Macdonald said.

“Like a fine wine and we’re just happy to have him,” Paul Macdonald added. “He’s certainly having a strong year. We couldn’t be more excited, particularly the last four or five starts, he’s really stood out for us. But he’s been a great horse for us since the beginning. We couldn’t have had more fun over the last number of years. We’ve been to all the big races, and for sure this year he’s really come into his own.”

Paul added he was lucky Alan picked the horse as a yearling and “dragged us all along for the ride. We’re very lucky.”

The horse started in Charlottetown, P.E.I. with Kenny Arsenault. When State Treasurer started to show promise as a two-year-old, he was shipped east to Ontario with Dr. Ian Moore.

“And the rest has been history, so to speak,” Paul added.

“This is his biggest win ever,” Moore said. “He’s having a heck of a year. You can’t say enough about him, he’s a heckuva little horse. He’s had only 14 starts this year and they’ve been all hard starts with a lot of trucking. We’ll look at his schedule and go week to week with him. One of the prerequisites for getting better with age is soundness. He’s had a little issue with his left hind a time or two in the last few years, but he’s able to race on through it. He’s never taken a lame step.”

Earlier on the card, Moore scored a win with Arthur Blue Chip, who had won six of 11 starts and $400,000 as a two-year-old two years ago, but developed all kinds of soundness issues.

“For the past two years he’s had more than one injury and they’ve all been self-inflicted,” Moore said. “He’s been very, very difficult to manage. It’s been a long road back.”

Control The Moment Stays In Control

Waples had a choice between Control The Moment and Voracity, but stuck with the horse who hadn’t lost. Voracity, driven by Steve Condren, led after a quarter mile in 26 flat. But Waples had his horse on the move and had the lead after a half mile in 54 2/5. He maintained the lead through three quarters in 1:22 4/5. Betting Line placed second, followed by Voracity.

“I’ll tell you he’s a very, very unbelievably nice animal,” Waples said. “I have a tendency to let him shut down and go to sleep, but I could hear Steve start to make another round at me and I started (Control The Moment) again and he just took off. It seems like he’s got a huge set of lungs to him. He does not get tired.”

He is owned by trainer Brad Maxwell, Howard Taylor, Edwin Gold and Ben Mudry. Taylor and Gold are longtime partners on horses, beginning with the great champion trotting mare Buck I St. Pat, a winner of more than $2 million, more than a dozen years ago. Mudry is a friend of Maxwell’s.

Maxwell paid $47,000 for the colt and immediately invited Taylor, with whom he’s had horses in the past, to buy a quarter interest. Maxwell trained the colt’s mother, Lifeslittletreasure, and Taylor had always been a fan of Well Said.

“It’s a steal right now,” Taylor said of his investment in the colt. “Best money I’ve ever spent. Ed Gold has been my partner, and every great horse I’ve ever had he’s had a piece of. He’s a great guy, we’re close friends.”

Taylor, a Philadelphia lawyer, had never seen the horse race prior to his win in the Metro. Taylor, who has been in the business 44 years and bought his first horse at the age of 12, has 145 horses, so he can’t be at every race.

“I don’t want to sound like I’m bragging, but I’ve had some great horses – Buck I. St. Pat, Economy Terror, Fred And Ginger,” Taylor said. “But potentially (this) is the best horse I’ve ever had. I’ve never had a horse that did what he did as early as he’s done.”

He and his wife watched the race from winner’s circle.

“My wife said ‘I’m superstitious, let’s see it from the winner’s circle for the first time.’ I said okay. I saw 54 2/5 and said that’s way too fast. I still can’t believe how fast he went.”

Taylor also had In The Arsenal competing Saturday night in the Messenger at Yonkers. The horse raced third after setting the pace for most of the race.

Waples had the 13-20 betting favorite sitting fifth by 4¾ lengths after a quarter mile in 27 3/5, then assumed control parked at the half in 54 3/5 and continued through three quarters in 1:23.

She is trained by Bob McIntosh, who bred the filly by Bettor’s Delight with fellow owners CSX Stables and Al McIntosh.

Muscle Diamond, driven by John Campbell, won by a head over Lookslikeachipndale to win the $115,454 Simcoe Stakes for three-year-old colt trotters.