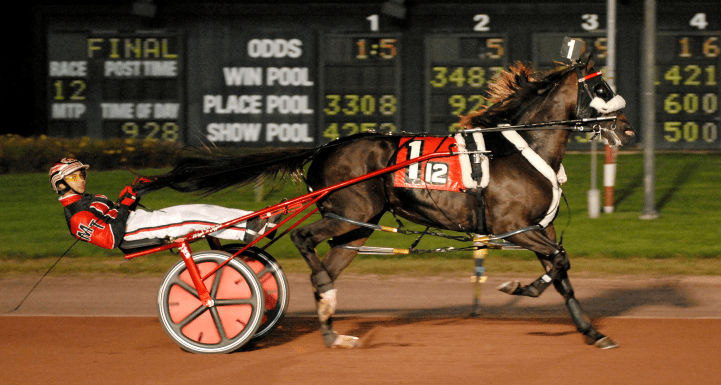 WILKES-BARRE, PA – The top three horses in the Harness Racing Top 10 poll all showed up at Pocono Downs last night and only one went home without his tail between his legs.

Wiggle It Jiggleit was marvelous capturing the Battle of the Brandywine, winning by three lengths in 1:48 over rival Wakizashi Hanover. As for Pinkman and JL Cruze, well, it wasn’t exactly a good night. In his first start since winning the Hambletonian Pinkman broke in the Colonial and finished last. Making his first start since July 18, JL Cruze was dull in the Sebastian K Invitational and finished fourth.

It was one of those nights that proved for the umpteenth time that there is no such thing as a sure thing in horse racing, but Wiggle It Jiggleit is as close as it gets. On a star-packed card that was part of the 50th anniversary of Pocono Downs, the gelded son of Mr Wiggles lived up to his billing as the best 3-year-old pacer in North America.

He’s not unbeatable, either, as he’s lost twice this year. But as long as he doesn’t get a really poor trip he’s very unlikely to lose. Last night’s Battle of the Brandywine was just the latest example of his superiority.

Though the gelding drew the one post and has great gate speed, driver Montreall Teague decided to take back off the gate. Wiggle It was fourth after the opening quarter before Teague made a first over move to take control. He was in command at the three-quarter mark, which went in 1:21.1, but briefly appeared to have a battle on his hands as Artspeak drew along side and wouldn’t go away.

But Wiggle It would put him away and was in complete control crossing the wire.

“Literally, I just do whatever he wants to do,” Montrell Teague said. “He tells me what he wants to do. If he wants to go to the front and wants to leave out of there at 100 miles-per-hour then I’ll let him do it. He just a versatile horse. He can do it from off the pace, first over, second over and on the front.”

As good as Wiggle It was last night, owner George Teague Jr. revealed afterward that the horse is having physical problems.

“He’s got a little bit of a muscle up on his back that irritates him a bit and you really can’t do much with him, so he hadn’t trained in about a month,” Teague said. “He’s raced but not trained. He’s just jogged because of the muscle issue. We did a little something with him the beginning of this week and it seemed to work pretty good. He’s not as sound as he’s been. We’re lucky it’s not a joint problem or anything real serious. It’s just a muscle problem.”

Though there’s a lot of racing left before the Horse-of-the-Year title will be decided, Wiggle It Jiggleit had a big night when it comes to that honor.

“I noticed it,” George Teague said of the losses suffered by JL Cruze and Pinkman. “It’s no factor so far as what our horse has proven. I know the voting kind of favors trotters, at least I think so. I don’t think people are as opened
minded as they should be about pacers. He should be No. 1 , but trotters always get a little bit of favoritism.”

The next major goal for Wiggle It Jiggleit is the Little Brown Jug. Teague said it’s unlikely he will race between now and Jug Day but didn’t rule it out.

Last night marked the return of driver John Campbell who had been sidelined since breaking his wrist in a spill during a baby race at the Meadowlands in late July. Showing that there was no rust, Campbell won the third race on the card, a Colonial consolation event with Muscle Diamond. But when it came to his “big horse” on the night, he didn’t get the result he was hoping for.

JL Cruze had won 16 of 18 this year and looked like the horse to beat on paper in the $100,000 Sebastian K invitational. The bettors had other ideas as they made Resolve the even-money favorite and sent JL Cruze off at 13-10.

But neither one made it to the winner’s circle as EL Titan won by a head over Resolve in 1:51.2. JL Cruze had the lead entering the stretch but came up empty when it counted and finished fourth.

The race was won by E L Titan, who is trained by Riina Rekila. Rekila was listed to drive the son of Muscle Hill, but said she never intended to handle that assignment. Tim Tetrick did the honors.

E L Titan didn’t make his first start of the year until July 13 at Mohawk.

“He was bleeding until July,” Rekila explained. “It was very stressful for the horse so I didn’t want to stress him too much. He’s had allergies, too. He’s not at his best in the summer. He’s at his best when it’s cold and rainy. He really likes that kind of weather.”

As the top 3-year-old male trotters and pacers waited their turn, a well-matched field of nine met in the $350,000 Valley Forge for 3-year-old pacing fillies. This group has taken turns beating one another throughout much of the year, and on this night it was Bettor Be Steppin’s turn. The Joe Holloway-trained daughter of Bettor’s Delight won by three-quarters of a length over Momas Got A Gun. Corey Callahan was the winning driver. She seems to have an affinity for Pocono as her last win came at the Wilkes-Barre oval in the James Lynch.

The Colonial was next and the deck seemed to be stacked in Jimmy Takter’s favor. Not only did he have the heavy favorite in Hambletonian winner Pinkman but he trained five of the nine horses in the field. But Takter’s chances of victory diminished greatly when Pinkman broke just after the start.

“I think he was a little bit pepped up,” Takter said. “He was a little racy. I don’t know why. They are horses. That’s why we have to race the races.”

The race was won by Crazy Wow, who got a perfect drive from Tim Tetrick to win by 1 1/4 lengths over Takter’s The Bank.

With Pinkman, driver Yannick Gingras continues to zig when zagging is the appropriate move. He took off Pinkman in the Hambletonian to drive Mission Brief only to watch Pinkman beat his filly with Brian Sears driving the gelding. Takter was in a forgiving mood and gave Gingras the drive back on Pinkman. Had he not done so, Gingras would have driven Crazy Wow last night.

Crazy Wow has flown under the radar because many of his starts have come in New York sire stakes races and he was not eligible for the Hambletonian. But for Tetrick and Ron Burke he put it all together last night for the biggest win of his career.

“Of course I wanted to race him in the Hambletonian,” Burke said. “He’s the second best trotter I have in my barn (behind Mission Brief). It is what it is. He wasn’t eligible, so you go where you are eligible and hope to do as well as you can while you are there.”

Burke understands that many won’t think Crazy Wow would have won last night had Pinkman not broken. He doesn’t care.

“I don’t worry about whether this was a fluke or not a fluke,” he said. “I take the checks and am happy whenever we win. I feel bad for Jimmy. I know that when something like that happens to me it really hurts beyond belief. I’ll never take pleasure when something bad happen to someone else.

“Before the year is over this horse will be heard from. He’s a good horse and he’ll be a very good horse at four next year.”

Crazy Wow was driven by Tetrick, the first time he has partnered with the horse. Tetrick said he never heard from Burke beforehand and learned he had the drive only when he first saw the program proof.

For all of last night’s combatants at Pocono, there’s a lot more racing left to be done this year. For some, they’ll need to regroup. But not for Wiggle It Jiggleit. For now, the No. 1 candidate for Horse of the Year, he keeps marching on.