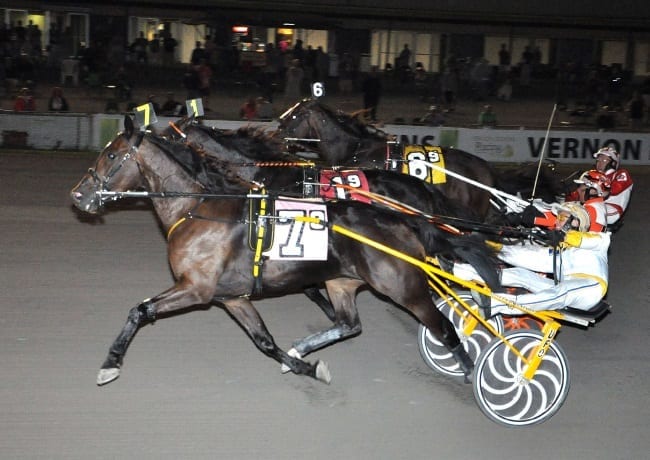 Driven by Mark Macdonald for trainer Paul Kelley, who is one of the owners of the seven-year-old gelding by Boy Band, Obrigado was extremely game after battling early pacesetter Melady’s Monet, who led by a head after an opening quarter in 27 1/5. Macdonald hustled his mount to the lead and took over leading up to the half-mile point in 56 1/5. But the 1½-length lead started to diminish and was narrowed to a half length after three quarters in 1:24 4/5. It was at that point that Lindy’s Tru Grit found a seam and led by a quarter of a length at the top of the stretch. But Obrigado found a little something extra to reclaim the lead and won by a neck in 1:52. Melady’s Monet finished third. Elitloppet winner Magic Tonight, who was making his second race in the U.S. after a disappointing 10th-place finish in the John Cashman Memorial, never really kicked into gear and placed fourth.

“After being used like that a lot of horses would probably give up, but this horse never gives up; he just keep digging right to the wire,” Macdonald said. “You’ll see he’s got a lot of seconds and thirds because a lot of those were tough trips that could have been wins. He’s the ultimate racehorse.”

He has won the majority of that for Kelley, who owns a 14 percent interest in Obrigado.

The horse had been racing in Maine, where Kelley is originally from and regularly follows the stakes program and the track. Mike Andrew, the breeder and owner of the horse, routinely sells his horses after their three-year-old seasons. Kelley is a friend of Andrew’s and has done business with him in the past, so when the horse was put in the Harrisburg Mixed Sales, Kelley bid and the hammer came down at $53,000.

Kelley had various clients interested in the gelding following the purchase at Harrisburg. Bill Weaver of Illinois was given a third, as was Stable 45 of Florida. Lynn Higgins, a longtime friend of Kelley’s from Maine who had seen the horse, wanted in, too, and was given a 20% share.

“No one expected this horse to turn out as good as he has,” Kelley said. “We took our time with him in the winter of his four-year-old year and he just kind of blossomed from there and he’s turned out to be a really, really nice horse. You’re very fortunate to get a horse like this coming out of a mixed sale. He certainly flew under the radar for a lot of guys shopping at the mixed sale for a high-end horse. To be honest, I thought I was really thinking I was buying a horse that was going to be a good open trotter for Saratoga. He’s just turned out to be so much more than that. He’s the best aged horse I’ve ever had. I race mostly two- and three-year-olds and I’ve had some pretty good ones that made quite a bit of money. It’s hard to compare him against those kind of horses, but as far as an aged horse he’s just a really, really nice horse.”

Kelley said he is pointing the horse to the Maple Leaf Trot at Mohawk.

Jeff Baymond is in the business of buying horses in training and last year he bought the four-year-old mare Venus Delight. It’s been a great purchase so far.

Venus Delight scored a one-length win over Radar Contact in the $194,000 Artiscape for older pacing mares.

Venus Delight was coupled with stablemate Anndrovette and went postward as the favorite at slightly more than 9-5 in the 10-horse field. Venus Delight won in a time of 1:49 4/5, tying the track record for aged pacing mares.

Anndrovette, the multiple older mare champion, finished third after setting the pace through fractions of 26, 54 3/5 and 1:22 3/5. Jason Bartlett, who drove the winner, said his mare normally doesn’t show early speed off of the gate, but he didn’t fight her when she wanted to go starting from post position eight in the 10-horse field. The two entrymates engaged in a battle for the lead, but Bartlett was willing to let Anndrovette, driven by Tim Tetrick, set the pace.

“She’s taken her lumps the last month with the post positions and no luck, but she got lucky tonight and it worked out for us,” Bartlett said. “She loves sitting in and flying home. I tried to get her a trip as best as I could and go from there. The race didn’t unfold like I thought it was, so you just kind of go with it. I thought there would be a little bit more speed early instead of just me and Timmy from the outside.”

Neither Bamond, nor his son, Jeffrey, who trains the mare, were on hand for the race. Bloodstock agent Marc Reynolds, who was in attendance for the race, said he had been contacted by the elder Bamond, with whom he does a lot of business, to inquire about the horse’s availability last August.

“We put the deal together and it’s been kind of a nice success story,” Reynolds said.

Swedish invader D’one is now two for two in the United States following a hard-charging one-length win in the $177,000 Muscle Hill for older trotting mares.

Employing similar strategy to what he did in the Fresh Yankee August 8 at the Meadowlands, driver Orjan Kihlstrom rallied from off the pace to register the victory and surpass $1 million in career earnings.

The field included 2013 Horse of the Year Bee A Magician and 2014 Trotter Of The Year Shake It Cerry, both of whom were in the Fresh Yankee. Overall, the nine-horse field had banked more than $9.5 million in career earnings.

Kihlstrom left early with his horse from the seven hole to try and gain early position, but had to take back as Shake It Cerry, who started from the seven hole, was aggressively rushed to the front by trainer/driver Jimmy Takter. Bee A Magician, driven by Brian Sears, settled in second.

Shake It Cerry led after an opening quarter in 26 3/5. But Sears claimed the lead after three-eighths of a mile and maintained position through a half in 56 and three quarters in 1:25 3/5. But the Swedish invader proved tough again, pinning a loss on the “Queen Bee” in a repeat of what happened in the Fresh Yankee. D’one covered the mile in a career-best 1:52 2/5. She is by Donato Hanover out of Giant Diablo, who won more than $1.8 million in her career and at one point had the record for the fastest mile by a trotter.

D’one is owned by a multiple partners who race under the name Stall Kenny 23 out of Sweden.

Walmann credited Kihlstrom for giving the mare a great drive.

“I’m really scared, but he is never scared,” Walmann said. “He gives the horses the best races. She is very fast. We always said she will be best coming from behind. ”

Walmann said he is a big fan of U.S. racing and would like to do it full-time.

“I would love coming over with the best horses I have in the stable,” he said.