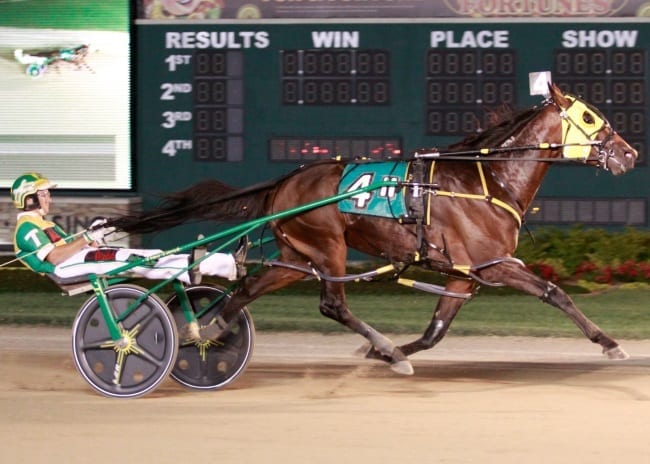 Freaky Feet, Wiggle It Rematch Could be Race of the Year

Wiggle It Jiggleit and Freaky Feet Pete have a lot in common as they are modest Indiana-breds, both with immense talent. But who’s the better horse? Right now, it looks like the answer is Wiggle It Jiggleit as he beat his fellow Hoosier-bred the one time the two met and is an accomplished winner on the Grand Circuit. But a rematch could definitely produce a different answer.

Wiggle It vs. Freaky Feet II will be among the most anticipated races of the year. And it appears it will happen Oct. 10 at Hoosier in the $200,000 finals of the Indiana Sire Stakes series. Wiggle It’s owner George Teague Jr. and Freaky Feet Pete’s trainer Larry Rheinheimer confirmed to HRU yesterday that race is on their schedules.

“I am looking forward to that race and, yes, I feel I will beat him,” Rheinheimer said. “Our horse is feeling very comfortable and we’ve gotten a few more races into him since the first time we met Wiggle It Jiggleit. He’s just very comfortable right now.”

Friday was a big night at Hoosier as the card featured the Dan Patch for free-for-all-pacers, which was won by the Jimmy Takter trained JK Endofanera. But it was Freaky Feet who stole the show. The 3-year-old won an Indiana Sire Stakes race by 9 1/4 lengths in 1:48.2 and was geared down before the wire by driver Trace Tetrick. One race later, JK Endofanera won in 1:48.4.

“I happened to notice that” Rheinheimer said when asked about his horse going faster than the Dan Patch. “I also noticed that the ear plugs were still in and he was on cruise control finishing, I am very proud of him.”

“He’s looked good all year; he’s a good horse,” he said. “I’ve always thought that. I thought he was the best 2-year-old I saw race last year. He’s just a good horse. I saw his race Friday. He was impressive, but he always looks impressive.”

Freaky Feet Pete is 16 for 18 lifetime, with just one loss this year. That came on May 30 when Wiggle It Jiggleit shipped in and beat him in a $75,000 Indiana Sire Stakes race by 1 1/2 lengths. While accepting defeat, Rheinheimer contends that the trip that night had a lot to do with the loss.

“We had the nine hole and he was on the inside,” Rheinheimer said. “We left out and (driver Trace Tetrick) thought he could get a trip in. Instead we were parked outside the whole way and didn’t get a trip out of the deal. That’s racing.”

Freaky Feet Pete has never raced outside of Indiana or in any Grand Circuit races. Rheinheimer said after Friday night’s race that he was seriously considering supplementing his horse to the Breeders Crown, but was backing off that yesterday.

“I talked to my son (Marty) today and he’s not that interested in showcasing him,” said Rheinheimer. “He said he’s a nice horse and he’s doing what we want him to do. He owns part of him and I don’t make all the decisions. He said the horse doesn’t owe us anything. He has a great following here in Indiana and we’d just as soon stay here in Indiana and let them watch him race.”

Freaky Feet Pete is eligible for two open stakes at Hoosier, the Jenna’s Beach Boy and the Monument Circle. Wiggle It Jiggleit has also paid into both races, but Teague said yesterday he hadn’t mapped out a schedule yet beyond the next few races for his gelding.

“He’s got the Battle of the Brandywine Saturday at Pocono then he’ll get a little break in his schedule,” Teague said. “We’ll see what happens and what we want to do in between Pocono and the Jug. The Jug is two heats so I’m not going to try to race a whole lot leading up to it.”

Rheinheimer also revealed yesterday that he came close to losing his horse to, who else?, but Ron Burke. He said that after Freaky Feet Pete’s first qualifier, Burke tried to buy him.

“Burke tried to buy him in and wanted him in the worst way,” he said. “Ronnie was mad because the owners wouldn’t pay the money. I priced him off a qualifier. After the qualifier Trace said ‘I drove all the colts out off that mare and he’s the best.’ So I priced him at $100,000. They didn’t want to pay that much.

“Two starts later, here they came again. I said the $100,000 was just off the qualifier…now he’s not for sale. Had they accepted the $100,000 I would have sold him right then. My philosophy now is he is not for sale. He doesn’t owe us anything and we’re going to enjoy the ride with him. Every time he goes to the track he just amazes me.”