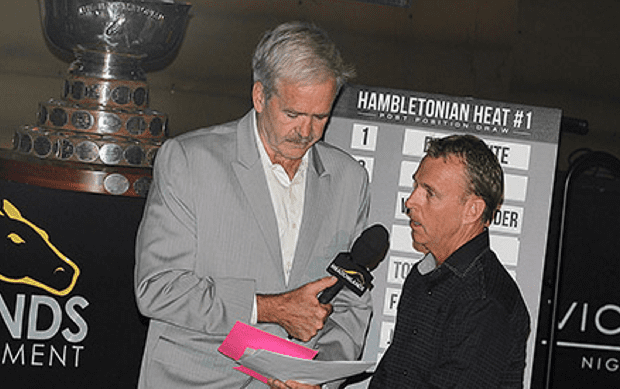 Hambletonian Draw Not Kind to Takter

EAST RUTHERFORD, NJ – Sometimes it might seem that Jimmy Takter never has a bad day, but that wasn’t the case Monday at the Meadowlands as the draw for the 90th edition of the Hambletonian was anything but good news for the trainer.

Takter entered a powerful quintet of five horses in the Hambletonian, which will be held Saturday, but it’s generally thought that his two best horses are Pinkman and Canepa Hanover. They drew into the same heat and drew the two outside posts. Pinkman was assigned post 10 and Canepa Hanover got the nine.

“Of course it did,” Takter said when asked if his confidence had waned after the draw. “Nine and ten is like a nightmare. They also drew into what I think is the way tougher division of the two.”

Takter will have three horses in the first heat, with the other being The Bank. He drew post two. He is down to drive both The Bank and Canepa Hanover and said he has yet to decide which one he will take.

“I was hoping Canepa and The Bank would be in split divisions because I was hoping to drive both of them,” he said. “The Bank is really sharp right now and Canepa and has a world of ability.”

Takter won last year’s Hambletonian with Trixton, part of an overwhelmingly powerful trio of contenders he had that also included Nuncio and Father Patrick. Though he has more horses this year he admitted it’s impossible to go into the race with the same confidence level.

“Last year, I had three that were totally outstanding,” he said. “We won every single race with those three. There wasn’t a fourth horse that compared to them. There are a couple of good ones in here and, of course, there’s Mission Brief. She’s a serious horse. In the rankings we have five out of the top six. They are nice horses. Pinkman is not the flashiest horse in the world but he gets the job done every time.”

Takter knows that Mission Brief could be a formidable opponent.

“I think she is,” Takter said when asked if Mission Brief is the biggest threat to his group. “Ronnie (Burke) has done a helluva job with that filly. She really didn’t look good for a long time and it was a big relief when she was second in the Del Miller. Then she looked good up at Vernon (in the Zweig). I understand why he is taking a shot in this race. You want to be in the main event. I’m sure he feels very comfortable in his division and he’ll probably end up winning his elimination and maybe without taking too much out of her. That’s a huge plus.”

Mission Brief drew the two post in the second elimination and will likely be heavily favored. Takter and Burke will have to wait until after the heats until hearing from Yannick Gingras about which of the two he is picking. Takter said he hasn’t given much thought as to who he will choose if Gingras is not available to him. Burke has not unveiled his back-up plan either, but said yesterday that Brian Sears is in the mix. Sears will drive his other Hambletonian entrant, Habitat.